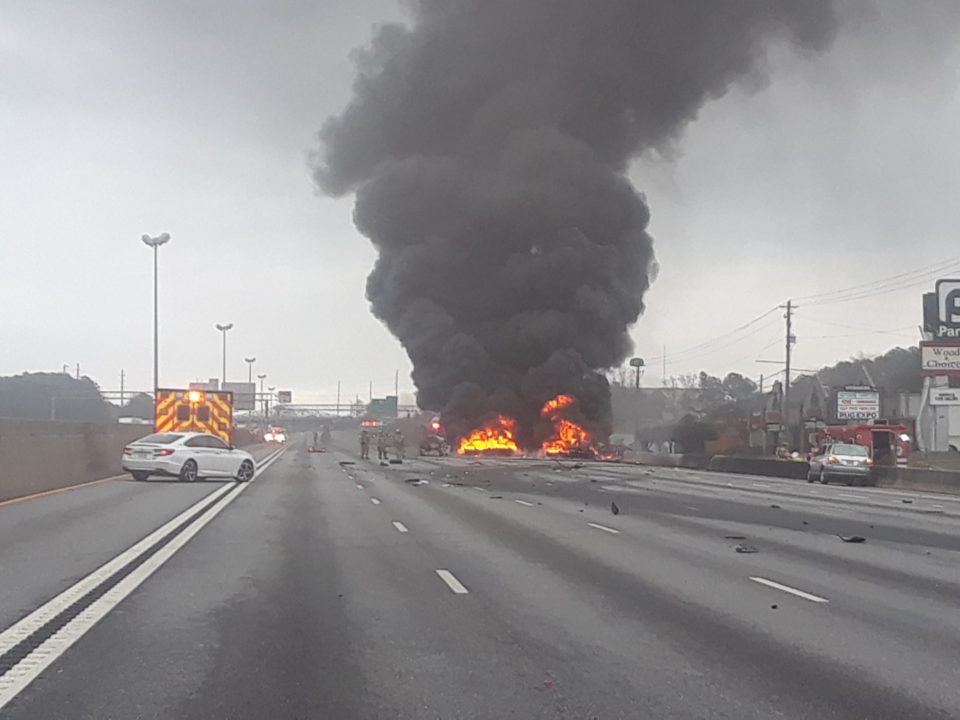 The multi-vehicle crash, which did not involve the Emory bus, has caused a delay in Saturday's meet against the University of Georgia. Current photo via Twitter/Gwinnett County Fire and Emergency Services

UPDATE: later in the morning, Georgia Tweeted that their meet against Emory has been cancelled. The Bulldogs will hold an intrasquad instead.

A massive fire on Interestate 85 in Georgia has resulted in the cancellation of a dual meet between the University of Georgia and Division III Emory. Georgia will host an intrasquad instead.

The meet is Georgia’s Senior Day and will include recognition for 17 members of Georgia’s senior class.

Saturday’s meet was to be the 51st all-time meeting between the men’s programs at Division III powerhouse Emory and the University of Georgia. Georgia has an all-time 41-9 record in those matchups. For the women, this is the 27th meeting, with Georgia having never lost. Emory are the 10-time defending NCAA Division III National Champions.

The two schools are separated by less than 70 miles. The most direct route between the two schools includes the first 15 miles spent on I-85, though there are several other possible routes.

I-85 was shut down in both directions on Saturday in Gwinnett County after a multiple-vehicle crash involving a tractor trailer that left one dead at about 8AM on Saturday morning. The Emory team bus was very near the fire and the team was among the people who were evacuated from nearby vehicles as a precaution.

The parent of an Emory swimmer posted the following photo of the team standing on the freeway this morning.

My son’s college swim team (Emory) was on way to a meet this morning at Georgia and got stuck behind a massive truck fire on I-85. The fire has spread to the surrounding area/trees and the swimmers have now been evacuated from their bus. pic.twitter.com/yEvtG2mRLB

This is the last-scheduled regular season meet for both schools.

This is video @WilllSmithhh sent me. Massive vehicle fire on I85 north at exit 99. (Jimmy Carter) pic.twitter.com/iBCUKNFbXq

ACTIVE INCIDENT: Firefighters are on scene of a multi-vehicle accident involving a tractor-trailer fire on I85 NB at Jimmy Carter Blvd. I85 is closed in both directions along with Crescent Drive and Dawson Blvd. @GwinnettPd pic.twitter.com/46qB6l1qaQ

you could misinterpret that picture quite easily lol

I would take this as a good luck charm for emory swimming. They’re about to set the georgia pool on fire with a remarkable upset!

I would take this as a time to show compassion for the victims and their families. Probably one or more “Georgia Dad’s” lost their lives.