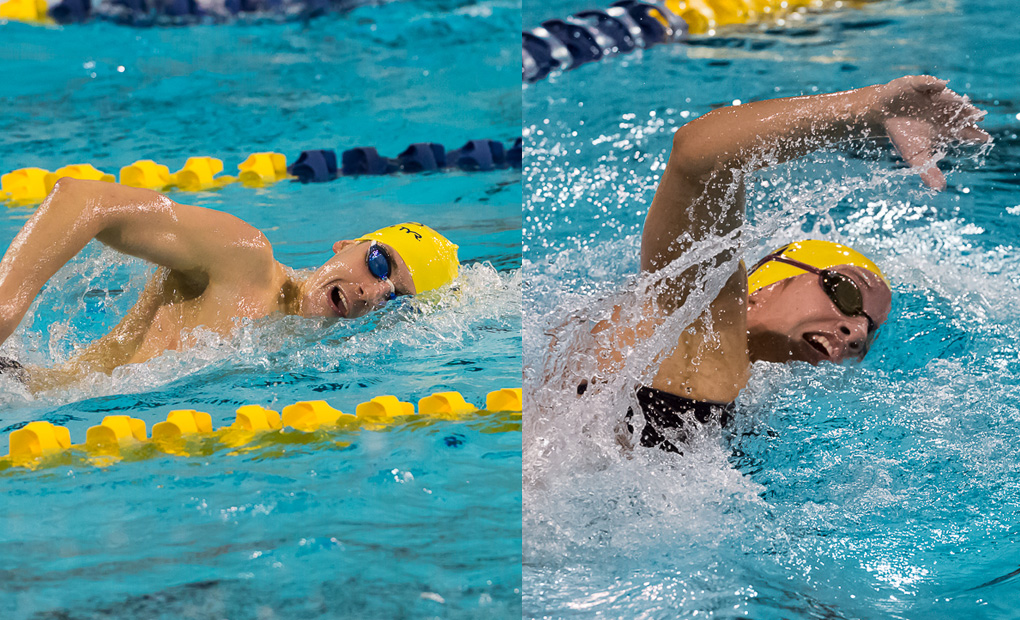 The Emory University swimming and diving teams had a strong showing at their fall invitational this weekend, sweeping both sides of the meet. Current photo via Emory Athletics

The Emory University swimming and diving teams had a strong showing at their fall invitational this weekend, sweeping both sides of the meet. The two-session meet was held at the Woodruff PE Center in Atlanta, GA.

Competing on the women’s side were the Eagles, Wingate University, Carson-Newman and Georgia Southern with Emory prevailing with a two-day team score of 708 points. For the men, the Eagles outlasted Wingate and Carson-Newman across the two sessions, recording 729.5 team points.

For the Emory men, the Eagles were just as dominant as they won 10 of the 17 swimming events contested.

During Friday’s session, senior Jack Kelleher and sophomore Jake Meyer notched individual event wins with Kelleher winning the 200 IM at 1:51.24 and Meyer touching first in the 100 Breast at 55.12. The Eagles were also winners in both relay events with seniors Colin LaFave, Hwa Min Sim, junior Ryan Soh and sophomore Nicholas Goudie posting a time of 1:21.71 to claim the 200 Free Relay and the group of Soh, Myer, Sim and Goudie recording a mark of 3:15.95 to finish first in the 400 Medley Relay.

The Eagles will return to the pool at the beginning of next month with the Denison and SCAD Invitational from December 2nd-4th.

Four schools participated in the Emory Fall Invitational with six teams listed in their respective top 25 polls. The host Emory Eagles are No. 2 in the NCAA Division III women’s poll, while the EU men are No. 4. Wingate is No. 2 in the D2 women’s poll and No. 6 in the D2 men’s listing. Carson-Newman’s women are No. 7 and the C-N Eagle men are No. 11 on the D2 charts.

– In her first 1650 Freestyle of the season, Agger posted a time of 16:50.83
– Freshman Kelsea Munro won the 50 Freestyle with a time of 23.29
– Anna Miram finished second in the 100 Backstroke with her time of 57.30
– Anne-Sofie Nissen was second in the 200 Breaststroke with her time of 2:18.35
– The Wingate women earned two gold medals, two silvers and two bronzes Saturday
– The Bulldogs visit Catawba next Saturday to face the host Indians and the Lenoir-Rhyne Bears

What They Are Saying

Wingate senior Layton Anderson: I thought we, as a team, swam well this weekend. It would’ve been easy to lay down after a hard few weeks of training, but I was impressed with the way we approached the meet and attacked each swim. I think we’ve set ourselves up very well to swim fast at the upcoming Fall Frenzy and also in the end at conference/nationals. I’m excited to get back to work the next couple of weeks before we get to swim fast again.”

“I wanted to give a shout out to Miguel Marcos for swimming the 400 IM (very fast) right after the 200 Free (also very fast) and then being ready to swim the relay at the end as well. Today was just another step in the process and I expect us to put the pieces together even more at Fall Frenzy and be even faster than we were this weekend.”

Wingate senior Madison Moffitt: “Overall, I think the team did a really good job racing…and putting their hands on the wall first. This is the first time that I have swam at this meet when we have suited up and got rested a little bit. I think getting the opportunity to suit up gave everyone a little bit of a confidence booster going into this meet. Emory has always been a good team to race, so this meet has always brought good competition.”

“I am pleased with my individual performances from this weekend. I had two season-best times and was not far from posting season-best times in my other events. I am looking forward to the remainder of the season and getting the opportunity to end my senior year on a strong note. We have Catawba and LR next weekend and Fall Frenzy the weekend afterwards. Fall Frenzy has always been a great mid-season meet to see where everyone is at heading into the holidays. With all the training that we have been doing over the past few months, I think it’s really starting to pay dividends. I can’t wait to see how the rest of the season goes.”

ATLANTA, Ga. – The Emory Invitational has come and gone for Carson-Newman swimming as the Eagles finished their time at the two-day event with 20 events Saturday. Both men’s and women’s captured third place as they finished behind first place and host school, Emory, and fellow Bluegrass Mountain Conference foe, Wingate, who claimed second on both sides.

The women’s team for the Eagles finished with 396 points while the men’s team was able to finish their two days of action with 454 points. After capturing five individual event victories on Friday, the Eagles saw a pair of individual victories as well as a sleuth of top-five finishes throughout all of Saturday’s action.

Not only is this the fourth fastest time for the event in DII women’s swimming, but was part of a close battle between second and third as C-N finished 0.01 seconds ahead of third place Wingate.

“Very proud of the team going out there and competing this weekend, especially with everything going on and how our fall has gone. We knew we would face tough competition in Emory and Wingate,” head coach Jordan Taylor said. “Emory and Wingate are really good programs but we stuck in there and heard our name said a lot in all events.”

Looks like there is no stopping Kailee Morgan when it comes to the breaststroke event. After claiming the women’s 100-yard breaststroke on Friday, Morgan finished the event sweep on Saturday as she won the 200-yard breaststroke in a time of 2:17.84. Morgan now holds the third and fourth fastest times in the event with her times from the two-day event.

Joining his teammate in the top five for the men’s 200-yard freestyle, Matthew George (Manchester, England) gathered fifth for the event with his time of 1:41.34. This is the 25th fastest event time for DII men’s swimming.

The women’s 1650-yard freestyle has been one of junior Rachel Peden (Boiling Springs, S.C.)’s strongest events in her Eagles career. Saturday would be no different as she claimed second in the event behind Kate Agger of Wingate as Peden finished in a time of 17:28.89. This is the second-fastest event time for DII women’s swimming.

Manon Compagner was in action for C-N in the women’s 100-yard butterfly Saturday. The Netherlands native captured her second third-place in an individual event as she came in a time of 55.99 on Saturday, the fifth-fastest event time for all DII women’s swimming.

In the men’s 50-yard freestyle, Nikita Puzevich built upon his impressive outing at the event with a fourth-place finish with his time of 20.81, the 24th fastest event time in DII men’s swimming. The Belarus native was only 0.30 seconds away from making a top-three placement for the event as third place finished in a time of 20.78.

Senior CJ Jensen (Copenhagen, Denmark) captured third for the Eagles in the women’s 400-yard IM on Saturday in a time of 4:30.77. This places Jensen with the eighth-fastest event time for DII women’s swimming.

“Overall, very solid team performance in relays and individual events. We still have some things to brush up on as we continue preparing for the UT Invitational,” Taylor said. “Very positive overall as we heard and saw Carson-Newman a lot over the event as well as had all the athletes supporting each other constantly.”

To conclude the event, C-N took to the pool for the men’s and women’s 400-yard freestyle relay events.

The women’s team finished second thanks to a finish of 3:32.58 by the quartet of Manon Compagner, Summer Osborne (Clearwater, Fla.), Chrisman Rand (Mount Pleasant, S.C.), and Meredith Ginn. The time posted by the quartet is now the eighth-fastest relay time for the event in DII women’s swimming this season.

The women’s team also saw another top-five finish in the event as a time of 3:35.23 by Debora Xavier (Sao Paulo, Brazil), CJ Jensen, Lilly Parr, and Anna Tudor (Murfreesboro, Tenn.) was sufficient for fourth place. This is the 14th fastest event time in DII women’s swimming.

Then, the men’s team wrapped up C-N’s time in the pool with a victorious time of 3:01.14 by the quartet of Igor Dantas, Matthew George, Hobson Stelling (Memphis, Tenn.), and Nicolas Lenuza. The quartet were able to finish a clear two seconds ahead of second place finishing relay team from Emory. This is the fourth-fastest relay event time in DII men’s swimming.

The Eagles now look ahead to a dual meet against the Bobcats of Lees-McRae later this week as they near their penultimate event of the fall season, the UT Invitational in a couple weeks. Be sure to keep up with the Carson-Newman swim team all season long on C-N’s social media platforms and on cneagles.com.

ATLANTA, Ga. – Georgia Southern swim and dive placed fourth in the Emory Invite this weekend in Atlanta, Georgia. The Eagles finished with 341 points over the two-day event.

The Eagles will have the week off and continue the 2021 portion of the season at the FGCU Invite, the weekend of November 18th-20th.

This is shaping up to be a fun season to watch in D3. It will be interesting to see how the top teams shake out in March, with no national championship having been held since 2019.