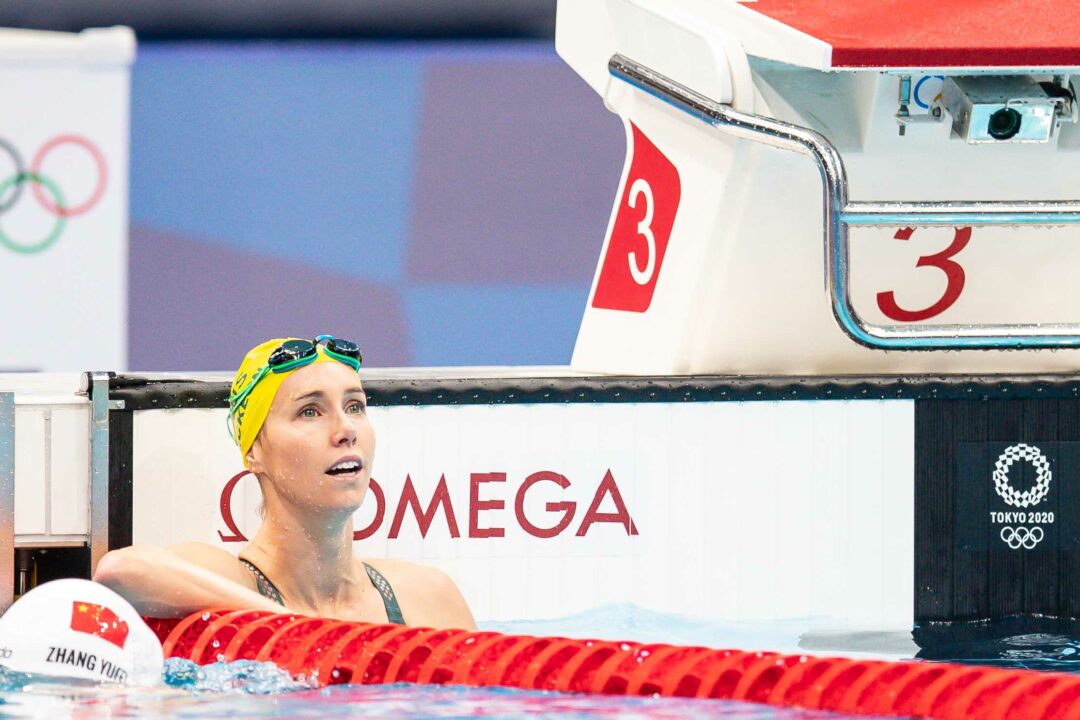 The women’s 100m freestyle final here in Tokyo brought the heat, as well as an Olympic Record, courtesy of Australia’s Emma McKeon.

The 27-year-old Griffith University athlete busted out the fastest time of her storied career, crushing a monster 51.96. This marks her first time ever under the 52-second threshold, overtaking the Aussie Record of 52.03 teammate Cate Campbell produced in 2018. It also surpassed the previous Olympic Record of 52.13 McKeon set herself in the semi-finals.

McKeon owned the race from beginning to end, opening in 25.08 and bringing it home in 26.88. That was enough to hold off Hong Kong’s Siobhan Haughey who charged to the wall in 52.27 for silver while Campbell snagged bronze in 52.52.

Entering these Olympics, McKeon’s lifetime best rested at the 52.29 she logged at this year’s Sydney Open. She dropped that down to the aforementioned 52.13 before firing off this final’s 51.96.

The Aussie now represents the 2nd fastest woman ever in this 100m free event, sitting only behind Sweden’s Sarah Sjostrom and her World Record mark of 51.71 from the 2017 FINA World Championships. Sjostrom was in this race as well, posting a time of 52.68 for 5th place after having broken her elbow earlier this year.

On a career level, McKeon’s 100m free gold here represents her 8th Olympic medal but 1st individual gold. At the 2016 Olympic Games, she collected bronze in the 200m free, an event she opted out of here. She’ll be back in the 50m free later in the week.

So proud of Penny, in spite of 4th. PB, so close, such consistency.

Her PB coming into Tokyo is 52.19 that she swam in heats of trials .. I think this is the first time sun 52seconds has been swum by a woman in an individual 100m race as opposed to a relay event

The first athlete to win 4 medals in Tokyo

What a great effort.

You forgetting the trailblazer – Fanny Durack? 😉

Such a fast race compared to Rio. Hopkin in 7th would’ve got Bronze in Tokyo. The Top five were faster than Rio gold – (which wasn’t slow as it was an Olympic record). Oleksiak, Campbell and Sjostrom (dodgy elbow and all) are all faster than they were in Rio. Chalmers also so much faster now for silver. I know these games are getting a bad rap for so few WR but I’d love swimswam to run an article on Olympic records and depth across the fields. I feel these games have been competitive and exciting.

I agree and given the added challenges of the pandemic and morning finals to boot, the swimmers have definitely risen to the challenges

Yes, I feel most events have actually gotten alot more competitive even if the top times may not be as fast as in Rio for some events. It’s a lot harder to slack for prelims / semis anymore.

So proud of Emma, deserved an individual gold. Won in blazing fashion, I thought she’d go 51.8, and probably could of if not for the 200 relay yesterday. Funny how she will not swim her Olympic championship event in the medley. Cate for the free, Emma on fly. We may have enough speed in our three legs to carry our breast leg. USA still strong though.

Hoping for a really close fight for the medley relay. Hope Hodges can come through and keep it within 1.5 seconds from Jacoby, and Cate to find another 51 low split in her.

Cate is about half a second slower than her peak so you’d think she’d still be able to manage a 51 high at worst.