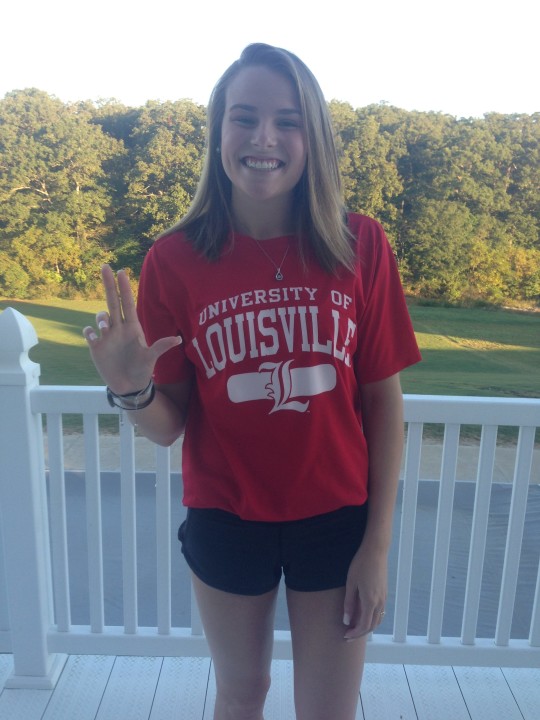 With best times of 22.90 in the 50 freestyle and 49.93 in the 100 freestyle, she will be a boost to Louisville’s sprint group which gets very thin after senior Kelsi Worrell and junior Andrea Kneppers, both of whom will be graduated by the time Braunecker is a sophomore. Aside from the above two-named, Louisville didn’t have anyone flat-start under 23 seconds in the 50 free last season.

Braunecker comes from an Academy Bullets club program program that has been best-known for producing female sprinters in recent years*, including Texas’ Mimi Schneider and high school junior Kayla Filipek (who is making a big push to be a top-10 recruit in next year’s high school class).

*Edtor’s note: Historically, the program is best known for Mary Descenza, a former World Record holder in the 200 fly.

Braunecker said a recent surgery threw a wrinkle into her recruiting process, but that it also led her to the University of Louisville.

“After surgery this past summer I afraid it would scare some schools away,” she said. “But with [Louisville coach] Arthur [Albiero] and the other coaches it was exactly the opposite. Their reaction to my set back gave me the confidence that they would help me grow as an athlete, a student, spiritually, and as a person.”

The Cardinals are coming off their best NCAA finish ever when they took 6th place on the back of the fastest 100 yard butterfly in history from Worrell (49.81). She joins a Louisville class that was off to a hot start very early in the recruiting cycle with May commitments from Casey Fanz and Grace Oglesby.

“Knowing I will have such amazing teammates is the greatest feeling, leaving me smiling as I put my ‘L’ up as often as I can,” Braunecker said.

Avery… So happy for and proud of you!

We are very excited and proud of our granddaughter. She us a has worked hard to get here and will be an excellent addition to the Cardinals team. She felt very welcomed during her visit and felt like a team family in that short time. We expect to see more time drops this senior year and a terrific trials experience.