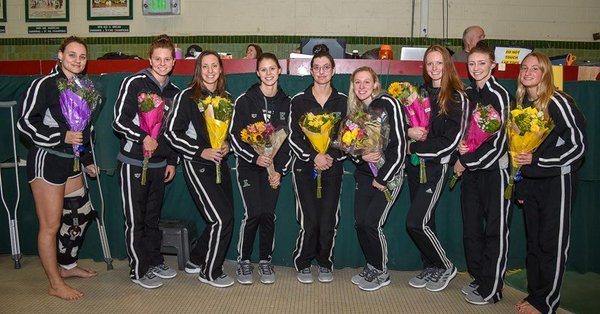 YPSILANTI, Mich (EMUEagles.com) – The Eastern Michigan University swimming and diving team completed its 2018-19 home slate Friday, Feb. 1, with a sweep of Albion College, 152-74 inside Jones Natatorium. The Eagles sent their nine seniors off with their eighth dual meet win of the season, completing a perfect record in duals for just the third time in program history.

In their final appearance in Jones, the Eagles’ seniors took home four event titles, while recording seven career-best efforts. The Green and White earned top finishes in all events swam, including both the 400 Freestyle Relay and 200 Medley Relay.

Senior diver Gabrielle Mace (Clinton, Mich.-Chippewa Valley) broke the 300-point barrier for the first time in her career, scoring a 308.18 on the 3-meter dive. Mace’s podium-topping effort also recorded the eighth-best performance by a Mid-American Conference diver this season.

Fellow senior Delaney Duncan (Galesburg, Ill.-Galesburg) made a statement in her last appearance in Jones Natatorium, swimming the 100 Butterfly for the first time in her collegiate career and finishing in 56.92 for the event title. Also earning an event win was fellow senior Stephanie Johnston (Holland, Mich.-Hamilton), finishing the 100 Freestyle in 51.30, just .19 off her career-best time.

Rounding out the senior’s top performances was Nicole Swartz (Dayton, Ohio-Centerville), who earned the top finish in the 400 IM with a time of 4:27.35. Fellow seniors Marissa Marion (Rockford, Mich.-Rockford), Dora Vrcic (Dubrovacka, Split, Croatia), and Rebecca Winnert (Buffalo, N.Y.- Williamsville) each recorded career-best efforts in the 100 Fly, 200 Free, and 100 Free, respectively. Emilie Desnoyers (St. Alberta, Alberta) swam in both the 50 and 500 Freestyle, tapping into the sprint with a time 25.58 and finishing the distance swim with a season-best time of 5:17.30.

The Eagles take a week’s break before their next competition, heading to Ohio State University to take part in the Ohio State Invitational, Feb. 16-17.

YPSILANTI, Mich. – Albion College swimmers sought an opportunity to get the feel of a deep pool with the start of the Michigan Intercollegiate Athletic Association Championship just three weeks away.

So, the Britons loaded the bus Friday for a meet at Eastern Michigan University.

The team score, as expected, favored the Division I Eagles, 152-74.

Allison Dasky, a first-year swimmer, turned in a third place finish in the 50-yard freestyle. She sprinted to the wall in 25.07 seconds.

Albion’s final dual meet of the season is scheduled for Feb. 9 at Olivet College.