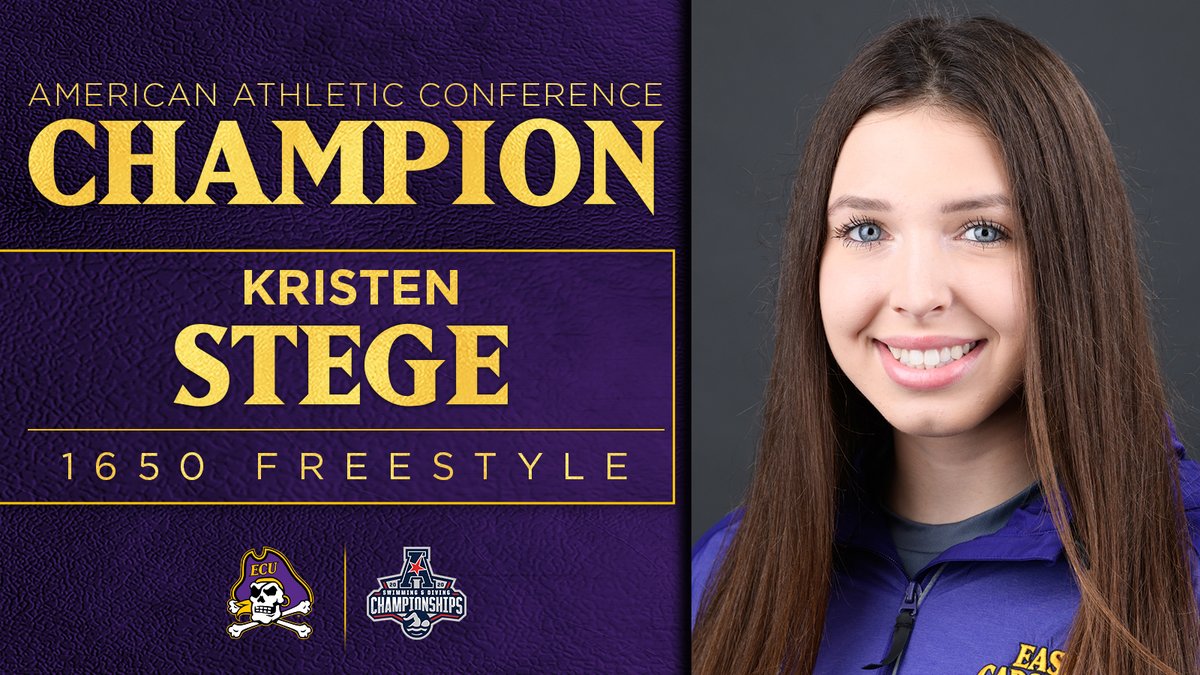 This is not a headline that anybody expected when East Carolina recruited Kristen Stege out of high school as a sprinter. Current photo via East Carolina Athletics

Think back to the first time you swam a 1650 free, if you ever have.

What were your goals? To survive? To not get lapped? Not having to stop and climb out mid-race?

For East Carolina University freshman Kristen Stege, her first-ever career swim in the 1650 free was the debut of a lifetime. Not only did she win her heat in the mile on the final day of the American Athletic Conference Championships last weekend at the University of Houston, she won the entire event and set a new Conference Record.

Sporting an official seed time of 59:59.59, Stege raced in the opening heats of the 1650 mid-afternoon on Saturday in Houston and finished in 16:11.96. That broke the old AAC Championship Meet and Conference records of 16:15.51 that was set by Cincinnati’s Sara Wanasek in 2018.

Stege now ranks 27th in the country in the mile, which likely will earn her an invitation to the NCAA Championships. Right now, she’s the Pirates’ only swimmer in an NCAA qualifying position.

That wasn’t just a collegiate-first swim for Stege, but a lifetime first. Recruited to East Carolina as a sprinter, Stege swam the 1000 yard free once as a senior in high school (11:05.49), and other than that, had essentially zero experience with distance racing. By the way, a year after that 1000, she split 9:46.50 on the first 1000 yards of her mile swim at AACs.

“In heat 1 at 3PM, no one was really there so there wasn’t much pressure,” Stege said of pre-race feelings about swimming her first mile at her first conference championship meet. “I didn’t really pace it, I just went out and swam, and kept an eye on (head coach Matthew) Jabs to see if I needed to speed up.”

While Stege says that she entered the race with no plan, her splitting didn’t indicate that she wasn’t an experienced pro.

“Her work ethic and what I had seen her do at practice all season, led me to believe she would have a decent mile, and in time an excellent one if she bought into the event,” East Carolina head coach Matt Jabs said of the swim. “It was a decision that took a good amount of time to arrive at, and I needed Kristen to be confident in what we were doing, and for her to trust me. We didn’t ‘train’ for the 1650 this year, we trained consistency and effort.

“She is a very consistent trainer.”

Jabs says the plan developed bit-by-bit across the course of the season, starting with trying to stretch her into the 200, followed by a stretch into the 500.

“The decision to swim the mile had nothing to do with conference points, it was all based on what I thought would put Kristen in a spot to see success,” Jabs said. “Towards the end of her senior year she swam a 4:58 in the 500 and I thought we could at the very least improve her 200 and look at the 500 as a place she could help us in the regular season once and a while. We had a few guys we were looking to stretch to the 500 as well, and so we added Kristen to that group always with the plan to keep swimming 200 on down this year. Sometime in mid to late October we did a mid -D set and she ended practice with a 4:53, keep in mind her PB is 4:58. So I put her in the 500 at the Georgia Tech Invite where she ended up going 4:45, which was really a big swim for her. That changed her belief and our focus a little. She knew at the very least she would be swimming the 500 at conference. We had a plan for her to swim the 1000 at our last dual meet of the year, but unfortunately she got sick and we never got to see what she could do.”

During Monday base work, and our Thursday 500 Pace sets she was really consistent, and I never saw her break, or significantly fall off in anything we did. My staff was constantly telling me to put her in the 1000, but I felt coming from a sprint mindset that we needed to be patient. She will say she wasn’t nervous but she definitely had some concerns. Especially with how fast to start and what the pace goal was. I told her to just find a rhythm and go with it. If she jumped up over 30 I would give her the sign to pick it up. She started strong and just kept rolling with only one 50 over 29. It was a great swim. Knew she would be pretty good, didn’t anticipate 16:11.

As for whether or not Stege plans to swim the race in the future, the jury is still out.

“I have mixed feelings, it definitely hurt a little, but I spoke with Jabs about training right after and felt good about the plan moving forward,” Stege said.

Of course the swims shouldn’t be a total surprise: Kristen’s sister Rachel, the #18 recruit in the high school class of 2021 and a Georgia commit, is a great distance swimmer. She’s an Illinois State Champion in the 500 free, and swam the 400 and 800 frees at the 2019 World Junior Swimming Championships.

Awesome article! Thank you for highlighting this accomplishment. She was simply amazing at conference.

this is pretttty wild

Kristen you are amazing! What an incredible accomplishment.

Kudos to Fox Valley Swim Team and Neuqua Valley High of Naperville IL. They got it going on out there!!!!

Great article, thanks to author and the coach for their insights! Congrats Kristen!