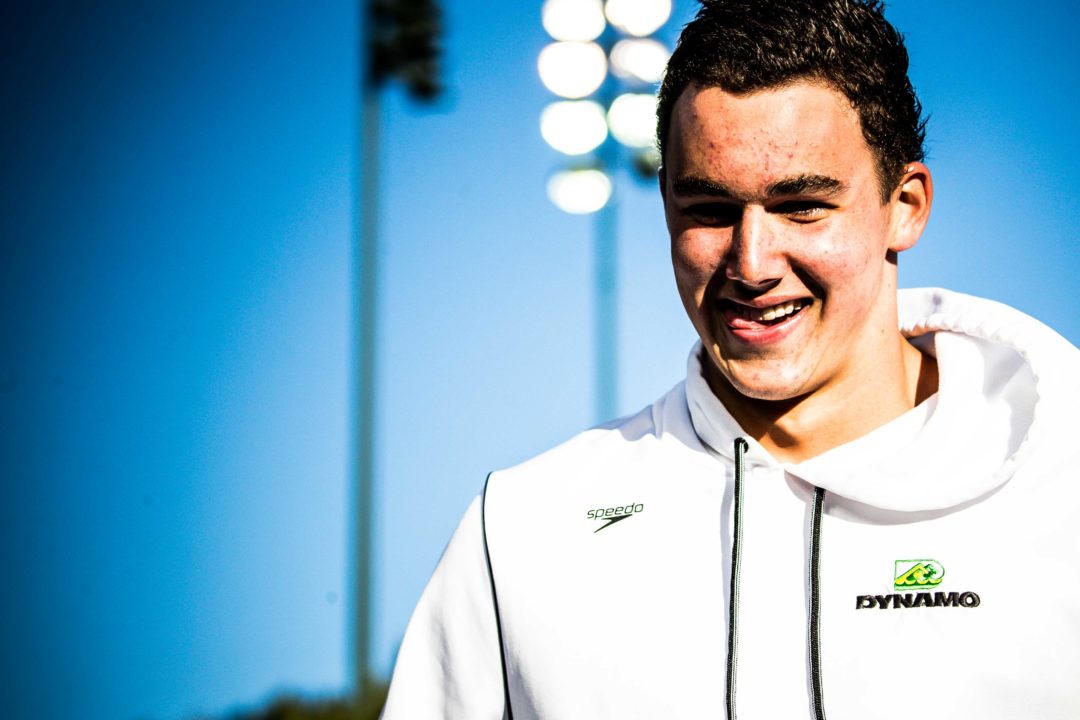 Ian Grum earned his 3rd gold medal of the night while anchoring the Dynamo boys to a National Age Group record in the 400 free relay. Current photo via Jack Spitser/Spitser Photography

The Dynamo boys continued their domination of the second night of the 2019 Speedo Junior National Championships by winning their third event of the night with a National Age Group Record in the 400 free relay.

Grum managed that anchor despite having already swum, and won, two of the more grueling events, the 200 back and the 400 IM, earlier in the session.

Their time broke both the 15-18 and 17-18 National Age Groups records of 3:23.91 previously set by the SwimMAC team of Kyle Darmody, Michael Chadwick, Jack Manchester, and Matthew Josa in 2013.

The old SwimMAC record took over 2 seconds from the previous mark and then managed to stand for 6 y ears until Dynamo broke it on Wednesday.

While this may may be the last meet where these Dynamo boys suit up as teammates, at least three of the four should be seeing plenty of each other in college competition. Curry has committed to LSU, Auerbach to Alabama, and Grum to Georgia, meaning all three will be swimming the same conference (SEC) next season. Goudie, meanwhile, will be swimming for Division III Emory, which has a dual meet scheduled for next season with Georgia.

Last sentence should be “Goudie, meanwhile, will be swimming for Division III Emory”

Not sure what happened there, added them in. Thanks!

That headline has entered the chat

Brooks Curry definitely one to watch next year at LSU. He’s had some huge time drops over the summer already (53.8 to 50.0 in the 100 free).

that actually got upvotes!?