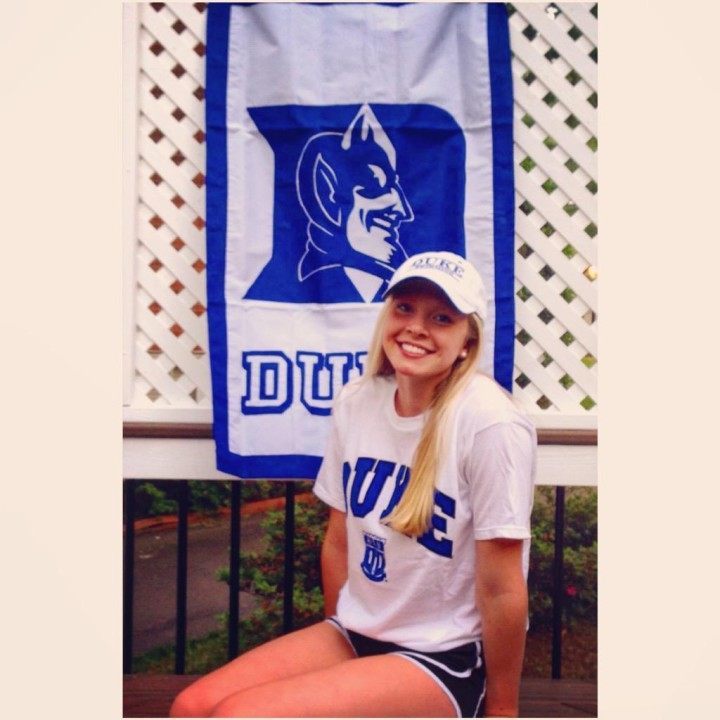 Suzanne Dolan is the second 2016 commit to Duke before the open contact period has even begun.

The Duke Blue Devils are cleaning-up in Virginia early in the class of 2016 recruiting. After NCAP’s Kylie Jordan verbally committed on Wednesday, Suzanne Dolan from Machine Aquatics gave her pledge late Thursday evening.

Dolan and Jordan will make fantastic complements to each other in Duke’s freshman class; whereas Jordan primarily specializes in the butterfly events and the 100/200 freestyles, Dolan’s best races are the breaststrokes, and the shorter 50/100 freestyles.

Best times in yards, through her junior season:

While Duke has some very fast sprint freestylers coming in from their class of 2015, to supplement those already on campus, Dolan should have a shot at all 5 relays as a freshman for the Blue Devils. Besides the sprint freestyles, Dolan will also have a chance to battle for the top spot in what was Duke’s weakest discipline last season – the breaststrokes – with class of 2015 commit Alyssa Arwood, who comes to campus with a best of 1:01.1 in the 100 and 2:15.4 in the 200 breaststroke.

Dolan made huge time drops between her sophomore and junior seasons. At the 2014 Virginia High School League 6A State Championship  meet (the biggest schools), she was 8th in the 50 free (24.4) for Yorktown High School and failed to even make the B-Final in the 100 freestyle (54.4). As a junior, she was the state champion in both, with a best time in the 50, and just shy of a best time in the 100 breaststroke.

As a senior, Dolan says she’s going to focus on getting some Olympic Trials cuts, making long course her effort – similarly to comments made by classmate Jordan.

Dolan also played on her school’s highly-touted varsity tennis team as a freshman.

wow, with the increased scholarships Duke is rapidly improving.

side note, every year NCAP, Machine, and RMSC have a ton of talent and UVA, the closest major school to these teams, basically never gets any of it. I’m curious as to why that is the case

I don’t really understand why keeping recruits in-state is so important. UVA is going to get talent no matter where they are from, right? Some kids may not want to live in the same place for the next four years, or maybe another school fits their needs best. Plus there’s scholarship money offered anyway, so what’s the issue?

Anonymous – cheaper. You can usually get an in-state recruit for fewer fractions of a scholarship, and for fewer dollars out of your budget. Georgia has had a lot of success that way, especially recently.

NCAP has become an absolute monster in the DC area — something 8 practice sites in Maryland, DC and Virginia. NCAP relays at national meets often feature kids who sometimes only see each other at those national meets. Machine has really stepped up the last couple of years, expanding practice sites and hiring Sue Chen — although Chen has now been hired by NCAP. In recent months, Machine actually has picked up a few quality swimmers from NCAP in part because the swimmers thought NCAP was too big for them. RMSC has felt the brunt of defections to NCAP. You really saw the impact of NCAP’s growth at NCSA Junior Nationals in March. NCAP won the girls’ team title, and… Read more »

I thought athletes weren’t aloud to talk to coaches until July 1? Why is she aloud to already commit if she hasn’t been able to openly talk to the coach?

athletes can contact the coaches by email and communicate them though there; If there is a mutual interest then the athletes can commit earlier than July 1; this happens a lot in other sports as well

JibJab – in the interests of any future applications to college , job or even nursing home – it is ‘allowed’ .

I wondered the same thing with all these early committs???? If coaches can’t talk to you how do they make scholarship offers????How do you commit not knowing if you will receive anything??????