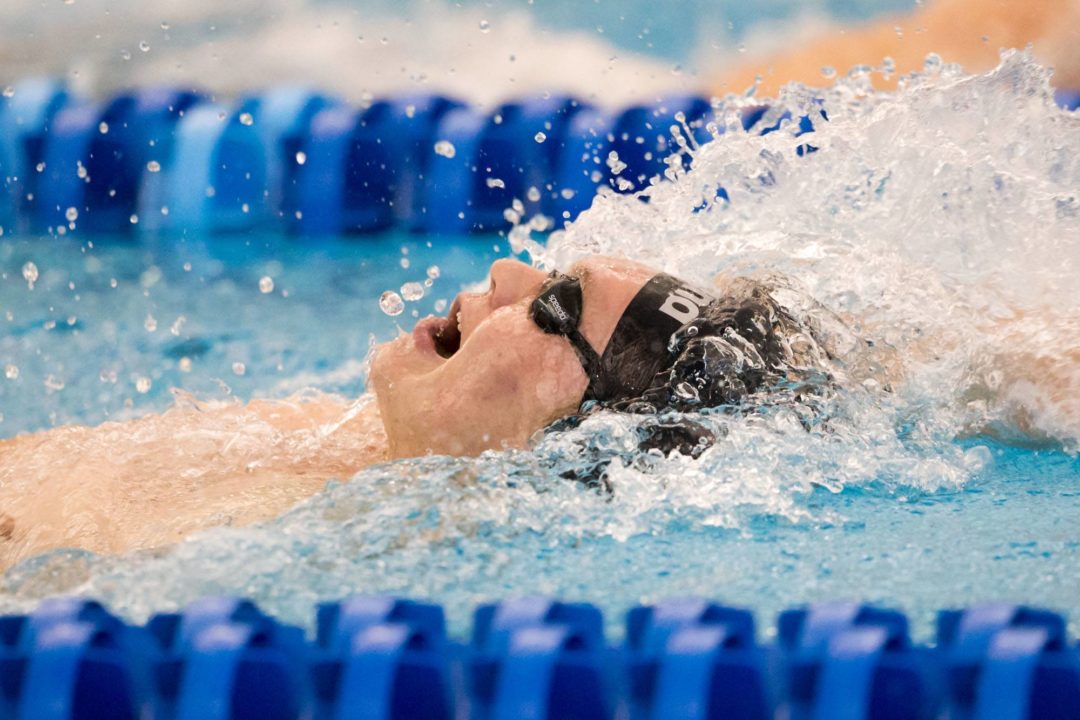 The Duke men and women came away from their double dual with Old Dominion and William & Mary with straight... Current photo via Tim Binning/TheSwimPictures.com

The Duke men and women came away from their double dual with Old Dominion and William & Mary with straight W’s.  These two wins move both the male and female Blue Devil squads to undefeated 5-0 records; the first time in program history that both teams have been undefeated in fall dual meets. The Men took down their competition against ODU and W&M with scores of 181-106 and 164-108; while the women finished with records of 177-100 and 181-87.

One of the stand competitors for Duke included swims by freshman Maddie Hess. She broke a pool and school record when the she touched in  53.95 in the 100 back, all the while earning a NCAA provisional cut. She also bested the school record in the 200 back by almost half a second, touching in 1:57.09.

William & Mary had a strong performance in the 1000 free,  with Morgan Smith and Hannah Vester taking second and third, respectively. Lexy Aitchison of Duke was able to pull out a win by 10 seconds in this event. Later she went on to take second in the 100 free (52.26) to teammate Chelsea Ye (51.63).

ODU scored first and second place points in the 400 IM with Emilie Petit and Julia Vido.

Like the women’s team, W&M was able to pull out second and third place finishes in the 1000 free with Eric Grimes and Conrad Zamparello touching shortly after Duke’s Marco Hosfeld.

The Duke men swept  the top three spots in the 100 breast with  Kropp, Dylan Payne, and  Michael Seaberg.

Both Old Dominion and the Blue Devils will return to action from November 19-21, when they attend the Nike Cup Invitational. William & Mary will attend the Bucknell Invite from November 20-22nd.

Lots of respect to that men’s 200 medley relay throwing down an INCREDIBLY fast time. But at 24.06 and 19.05 for those guys at this time in the season, i’m a little suspect of how fresh they are. Maybe they aren’t but if youre splitting 19.0 right now you better be going well under 18.5 at the end of the year. Let’s see how much time they can drop come championship season.

That’s fair, and yeah your probably right. I guess I’m more curious about the freestyler

Heard he skips leg day though

ACCFAN, give it 10 days. They’ll throw down at Nike Cup. And Polar Bear, you’re totally right, he hasn’t done a squat in years.