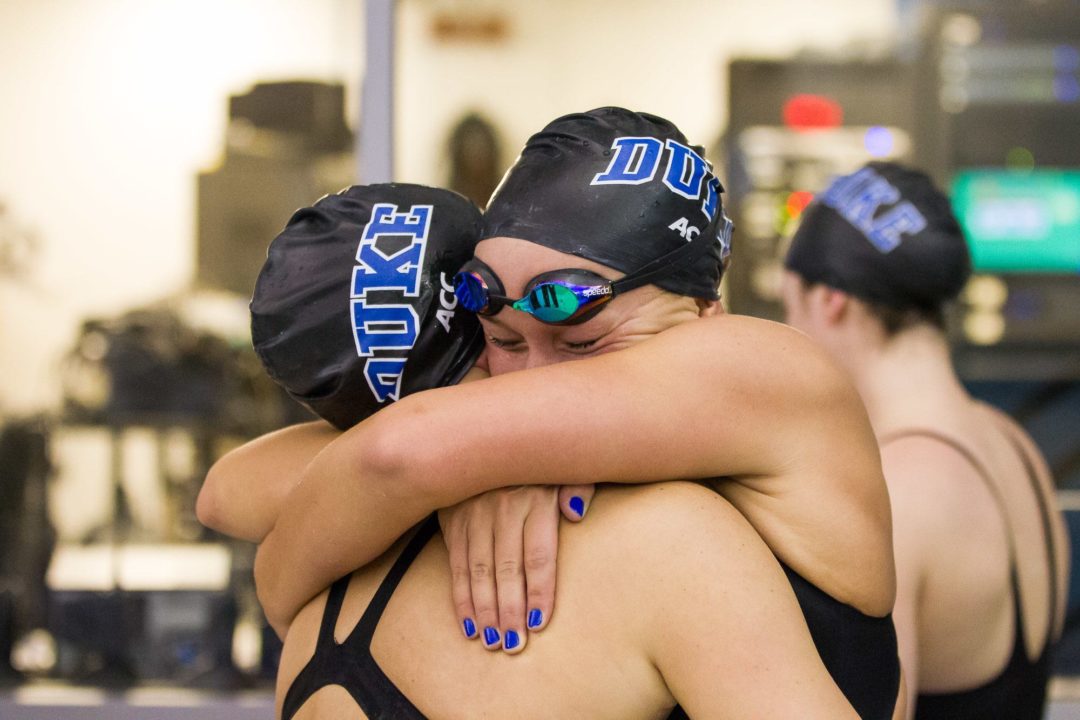 After qualifying the first relay in women’s program history to the NCAA Championship last spring, head coach Dan Colella and the Duke men and women will look to continue the development of young talent in the sprint lanes this season. Current photo via Tim Binning/TheSwimPictures.com

After qualifying the first relay in women’s program history to the NCAA Championship last spring, head coach Dan Colella and the Duke men and women will look to continue the development of young talent in the sprint lanes this season.

The Blue Devils’ 200-yard medley relay of Jessie Sutherland, Christine Wixted, Maddie Rusch and Lauren Weaver was the first in school history to gain automatic qualification to the NCAA Championship. The group broke the previous program record at the ACC Championship with a 1:37.75 clocking to advance to the national meet. The 200 freestyle relay of Weaver, Rusch, Kathryn Eckhart and Chelsea Ye also set a program record with a 1:29.90 showing in the NCAA preliminaries. Individually, Weaver captured All-ACC honors in the 50 freestyle with a third-place finish (22.19) at the conference championship.

On the men’s side, four of the Blue Devils’ five relays at the 2014 ACC Championship were comprised entirely of freshmen. The 200 freestyle and 200 medley relays both raced to an eighth-place finish in the league while James Peek advanced to the finals individually in the 50 and 100 freestyle.

Key Returners:
Juniors Eckhart and Ye and sophomores Rusch and Sutherland return NCAA Championship experience to the women’s sprint group for 2014-15. Although Sutherland focused more on the backstroke events as a rookie last season, Colella says she is expected to be a significant contributor from the sprint lane. Rusch will also look for a strong sophomore campaign after placing 14th in both sprint freestyle events at ACCs a year ago and earning an NCAA provisional standard in the 50 freestyle.

Peek headlines the men’s returners in the sprints after scoring for Duke in the 50 and 100 freestyle at the 2014 ACC Championship. The sophomore from Sussex, England posted an NCAA ‘B’ cut in the 50 freestyle while working on the transition to short course last year, and has seen improvement in his starts and turns during the offseason.

Two other sophomores who have demonstrated improvement since the spring are Adriaan Venter and Mike Seaberg, who earned a U.S. Olympic Trials cut in the 50m freestyle over the summer.

Newcomers to Watch:
Freshman Ryan Nicholson is one of the top men’s sprinters coming out of high school, and will be joined in the group by classmate Nick Bigot, who had a strong spring season. The sprint lane will also be bolstered by the arrival of transfer David Armstrong, while rookie Leah Goldman will look to contribute for the Blue Devil women.

Colella’s Take:
“This was an area last year that we swam well, but we were young. We’re extremely excited about the potential of our women’s sprint relays, both in freestyle and the 200 medley relay. I see our men’s relays really being more towards the top end of the ACC this year. The guys have big goals to get relays to NCAAs and we definitely have the speed and the talent to do that.”

Dan Colella is one of the most underrated coaches in America.

He had great success at Tennessee and will have Duke at the NCAA’s every year.