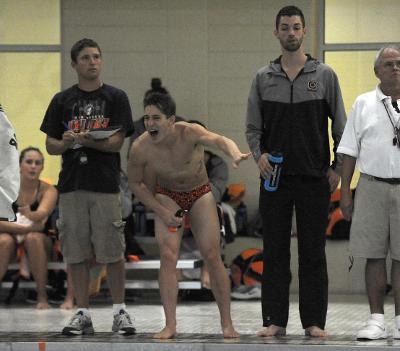 Eagles Head Coach Paige McCord was pleased with the performance. “I’ve been seeing success in small ways in the water already. I know where we were at, but it’s good to actually see where on a live stage like this where we are at time wise, ” said McCord. Several swimmers also went best times, getting their first taste of competition for the 2014-2015 season, but McCord stressed the long-term goals of the team. “We just gotta stay really focused, on conference and making nationals cuts,” said McCord.

In November of 2012, Carson-Newman announced the addition of men’s and women’s swimming. Carson-Newman competes in the Bluegrass Mountain Conference, at the NCAA Div. II level. The Eagles are in their infancy, as their 2013-2014 season was their first. They are building a solid foundation for the future and look to be off to a great start heading into their second season. The Eagle Women have only two seniors and do not have any juniors on their roster, but their sophomores and freshmen are ready to lead the way. The Eagle Men are also relying on a young team of freshmen and sophomores to step up, as they only have two juniors and three seniors on their roster. Both teams will host Lenoir-Rhyne on October 17 to start their regular season.