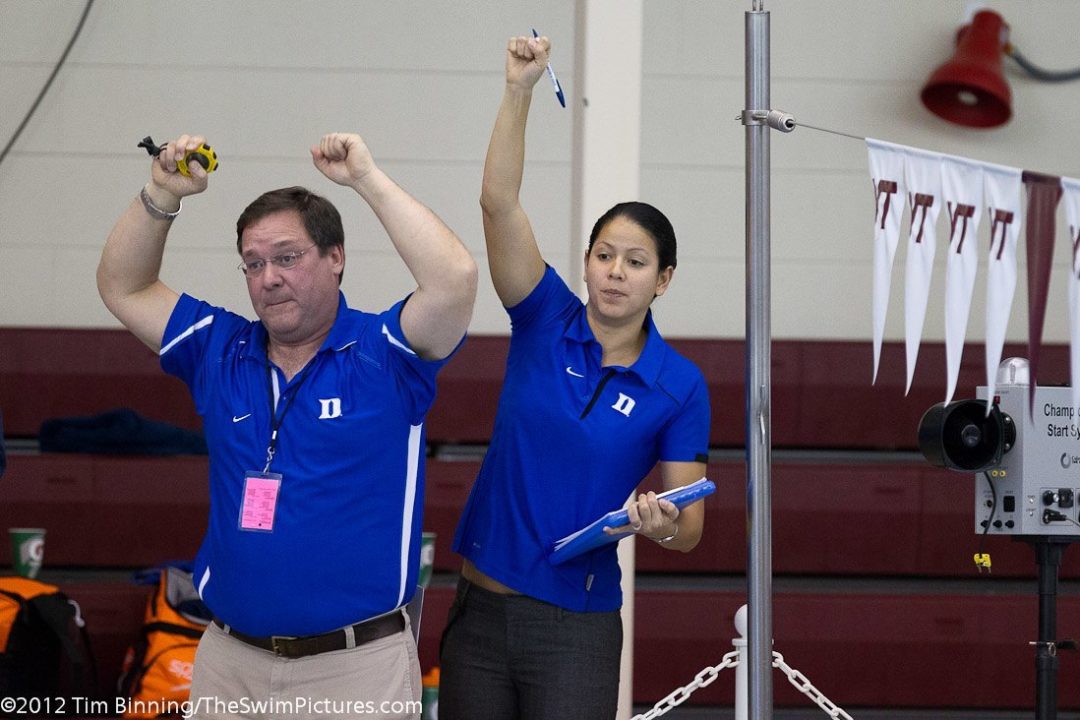 The Duke University men’s and women’s swimming and diving teams conclude fall competition this weekend, traveling to nearby Chapel Hill to take part in the 28th annual Janis Hape Dowd Nike Cup at North Carolina’s Koury Natatorium Thursday, Nov. 21 through Saturday, Nov. 23. Preliminaries will begin at 10 a.m. each day with finals slated for 6 p.m. each evening.

The Blue Devil men and women opened ACC action Friday, Nov. 8 in Raleigh, N.C., taking on NC State and the Miami women at the Wolfpack’s Willis R. Casey Aquatic Center. Both Duke teams fell to NC State (Men: 115-177; Women: 121-168) while the women picked up a win over Miami (198-92). Senior Christine Wixted highlighted several strong individual performances, sweeping the 100 and 200-yard breaststroke events. On the men’s side, senior Hunter Knight finished second in both breaststroke events. The Blue Devils’ sprint freestylers also had an impressive outing, as senior Lauren Weaver won the 50 freestyle in 22.86 for an NCAA provisional standard. Weaver also took second behind freshman Maddie Rusch in the 100 freestyle. Senior diver Nick McCrory continued his strong start to the season, sweeping the men’s springboard events in the ACC opener.

Less than 24 hours later, the Duke swimmers returned to the water for their home opener in Taishoff Aquatic Pavilion against William & Mary. The Blue Devil women (3-1, 1-1 ACC) earned a 162-100 victory over the Tribe while the Duke men (2-1, 0-1 ACC) topped their opponent by a 144-118 score. The Blue Devils started the dual meet with a strong statement, winning the men’s and women’s 200-yard medley relay events with a pair of season-best times. Individually, Hunter Knight paced the men’s squad with three first-place finishes while also breaking his own pool record in the 100 breaststroke at 55.42. Christine Wixted, graduate student Emily Barber and freshman Ashleigh Shanley swept the top three places in both women’s breaststroke competitions and the distance swimmers also had solid performances, led by freshman Lindsay Schlichte’s win in the 1,000 freestyle.

McCrory Repeats as ACC Male Diver of the Week

Senior diver Nick McCrory was named the ACC Male Diver of the Week for the second time this season Nov. 12 after collecting a pair of wins on the low boards against the Wolfpack. The The Chapel Hill, N.C., native posted scores of 401.20 on the 1-meter board and 417.20 at the 3-meter height to garner a pair of NCAA Zone Diving Championship qualifying marks for the second-straight meet. The ACC’s top performer in the 1 and 3-meter events, McCrory was also recognized this week in Sports Illustrated’s ‘Faces in the Crowd’ feature for his performance against UNC Wilmington Oct. 26.

The Blue Devils’ freshman class of 24 student-athletes has already had an impact on the men’s and women’s programs. Maddie Rusch has tallied seven individual wins in four meets, in addition to competing on Duke’s relay squads, while classmates Brittany Friese and Lindsay Schlichte led the distance group against William & Mary. On the men’s side, Bradley Cline turned in a pair of first-place performances against UNC Wilmington and has posted the Blue Devils’ top times of the season in in the 200 freestyle, 500 freestyle and 100 backstroke. James Peek paces the sprint lane with season-best marks in the 50 (20.82) and 100 (46.44) freestyle. On the boards, rookie Kirby Quinn surpassed the NCAA Zone Diving standard on the 3-meter springboard with a score of 280.87 to win the event against the Seahawks.

The Duke men and women and women will face host East Carolina, Navy, NC State, Old Dominion and host North Carolina at this weekend’s meet. The Tar Heel women are ranked eighth and the women 13th entering the three-day competition while the NC State women and men come in at 21st and 23rd, respectively, in the latest College Swimming Coaches Association of America (CSCAA) Division I poll.

“This meet will give us a benchmark of where we are in our training,” said head coach Dan Colella. “It gives us a really good idea of the things we’ll need to work on in the second half of the season. Obviously going to a three-day invitational like this is an opportunity to simulate what’s going to happen at ACCs with prelims and finals. It’s not often we have that opportunity, so there’s a lot of things that can be gained from the weekend. We’re excited. We’ve had some great swimming and diving going on this fall.”