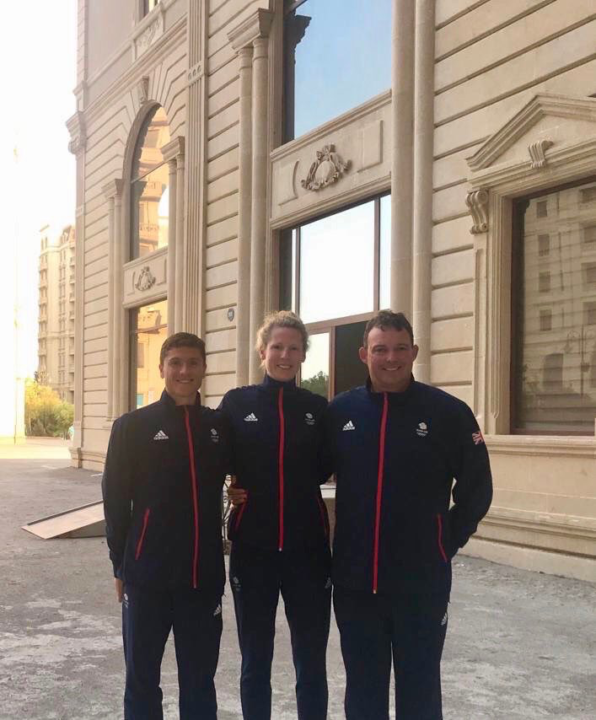 Mandy Bell (center), formerly of the City of Derby Swim Club, has been named as Head Coach of Stockport Metro in England. Archive photo via Mandy Bell

We announced last month how Stockport Metro Head Coach Richard Blackshaw would be leaving his post to pursue a new role as Talent Office with Swim England. We now know which on-the-rise coach will be taking over Blackshaw’s coaching role.

Mandy Bell has officially been revealed as Stockport Metro’s new Head Coach, transitioning from her recent role as City of Derby Head Coach. She had taken over that Derby spot in late 2016 after Mel Marshall and her protege, Adam Peaty, move to Loughborough.

Prior to Derby, Bell was stationed in Alberta, Canada where she was Lead Age Group Coach at the University of Calgary Swim Club, the largest club in Alberta. Bell is credited with coaching multiple swimmers to finals and medals at the Alberta Age Group and Senior Provision Championships, Western Canadian Open and Canadian Age Group Nationals, while also being recognized as Alberta’s Age Group Coach of the year in 2014.

Per Stockport’s announcement to its members, Bell says, “I look forward to beginning the next chapter of my career with Stockport Metro! In the past 3 years at City of Derby Swimming Club, I have had the pleasure of supporting swimmers on their way to European Junior Championships, European Para Championships and Para selection at the Commonwealth Games.

“Personal highlights of my career include coaching for Team GB at the 2019 European Youth Olympic Festival, selection for the Swim England Coach 2024 programme and being on the coaching team for the 2018/19 Swim England Performance Squad.”

Speaking to SwimSwam, Bell explains that she was sent on a professional development opportunity visit Stockport Metro in September 2015 when she was still in Canada. The visit left a lasting impression on Bell, who says taking the Head Coach position now ‘is the right fit at the right time.’

“I look forward to continuing the legacy of national and international success at Stockport Metro,” says Bell.

Liam Selby will also be joining the club as Assistant Head Coach. A former elite swimmer himself, Selby won 2 European Junior Championships silver medalist in Helsinki in 2010. He most recently coached at Hamilton Aquatics in Dubai before returning to England to complete a masters degree in human nutrition and biochemistry, while also earning level 3 personal training certification.

Sean Kelly will remain as Performance Squad Coach, continuing to work in collaboration with the rest of the team on club decisions.

Current swimmers at Stockport Metro include Katie Matts and Holly Hibbott, the latter of which took bronze in the women’s 400m freestyle at the 2018 Commonwealth Games on the Gold Coast, Australia.