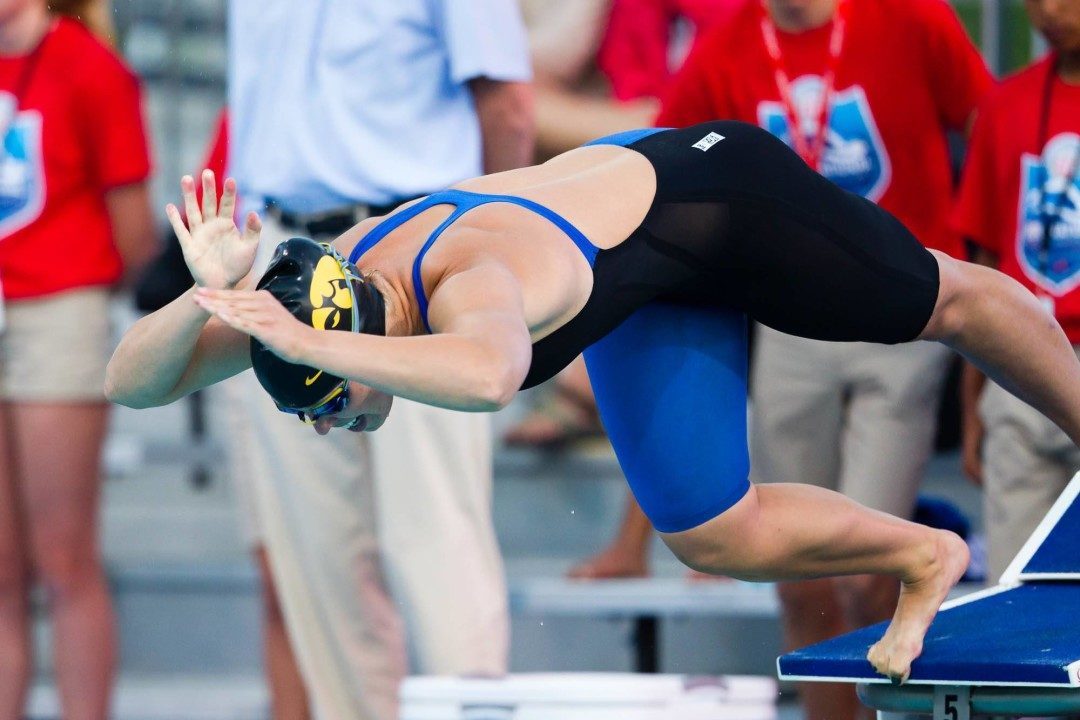 Denver’s men and Iowa’s women lead the Hawkeye Invitational after day one. The men hold a margin of 19 points over Iowa, leading 270 to 251. The women’s meet features a similar gap with Iowa currently topping Denver 240 to 223.

Iowa’s Emma Sougstad lead off in 22.63 to give the Hawkeyes a lead they held through to the end. The team of Sougstad, Olivia Kabacinski, Mekenna Scheitlin, and Kelly McNamara finished in a time of 1:31.52 over Denver’s 1:32.31. Wen Xu anchored Drury’s fourth place relay in 22.33, the fastest split in the field. Xu is the returning runner up in the 50 free at the Division II NCAA championships.

Denver’s men came away with the win in the men’s race, featuring the team of Ryno Bornman, Kyle Robrock, Clarence Guillory, and Timothy Cottam. Robrock split a stellar 18.97 to lead the team to a victory of 1:18.91. Denver finished second in 1:19.58, led by a 19.51 split from freshman Jack Smith.

Denver’s Dylan Bunch claimed the 500 free victory on the men’s side and was the only swimmer to break 4:20 in 4:19.79. Bunch was just outside of returning for finals at last year’s NCAA’s in this event, finishing 19th. His teammate Ryno Bornman and Incarnate Word freshman Kyrylo Shvets raced to a photo finish with Bornman claiming the runner-up position in 4:24.37. Shvets was four hundredths back in 4:24.41.

Emma Sougstad of Iowa picked up her second win of the night in the 200 IM, holding off a late charge from Denver freshman Bailey Andison to take the win. Sougstad and Andison finished in 1:59.25 and 1:59.37, with Denver’s Morgan McCormick placing third in 2:00.54.

The men’s 200 IM became a tight race for third, with Incarnate Word eventually shutting Iowa out of the top three. The Cardinals swept the podium with a lifetime best from David Moore (1:46.55), as well as strong swims from Beau Fusilier (1:48.50) and Aaron Moran (1:49.72).

Wen Xu granted Drury a win in the 50 free, winning in a season best of 22.60 that is a couple hundredths faster than her second-place time from Division II nationals last year. Emma Sougstad also touched under 23, claiming second place for Iowa in 22.91. UW Milwaukee’s Amanda Siehs finished third in 23.02.

Kyle Robrock set a new meet record in the men’s 50 with a personal best of 19.59. Between this morning and tonight, Robrock dropped over a half second off his previous best time. Drury’s Dan Rzadkowski picked up the silver in 20.05, while third featured a three-way tie between Iowa’s Jack Smith and Jackson Allen, and Denver’s Ryno Bornman at 20.14.

Anna Filipcic of Nebraska-Lincoln won the women’s one-meter diving event handily in 314.40, narrowly missing the meet record. She was followed by Wisconsin-Milwaukee’s Rachel Margis who scored 273.85 points. Brandi Heffner and Andrew Hull of Iowa lead the charge in the men’s three-meter, with Heffner coming out victorious with 366.90 points to Hull’s 346.25.