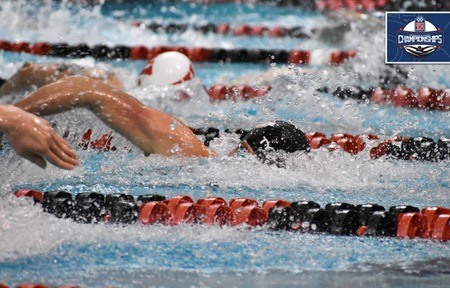 The Lords accumulated 153 total points, while the Big Red women sit in first with 70 points thanks to a first-place finish in the 800 free relay. Current photo via North Coast Athletic Conference

In the diving well on Wednesday night, Kenyon freshmen Drew Albrecht (Aurora, OH/Aurora) and Mason Fishell (Murrysville, PA/Franklin Regional) logged a one-two finish on the three-meter board. Albrecht earned the league title after scoring 500.05 points, while Fishell recorded a score of 425.35 for second. Wooster sophomore Eric Jacques (Columbus, OH/Wellington) rounded out the list of All-NCAC performers in the men’s three-meter competition by finishing third overall with 363.85 points.

Visit the championship website for complete results from day one: (NCAC Championship Site)

I am surprised that there was no mention of Crile Hart’s amazing anchor leg on the women’s 800 Free Relay of a 1:46.99 to come up only .02 seconds short of catching Denison. Pretty amazing!!!!

Wow! Thanks for pointing that out!

No preview or coverage of the women’s NESCAC meet? Arguably the deepest women’s conference in D3

I think when you get beyond the big guns, it’s up to the schools, coaches or SIDs to get their teams coverage. I’ve sent in articles to SwimSwam about meets, and they’ve covered the meets/posted the write-ups.