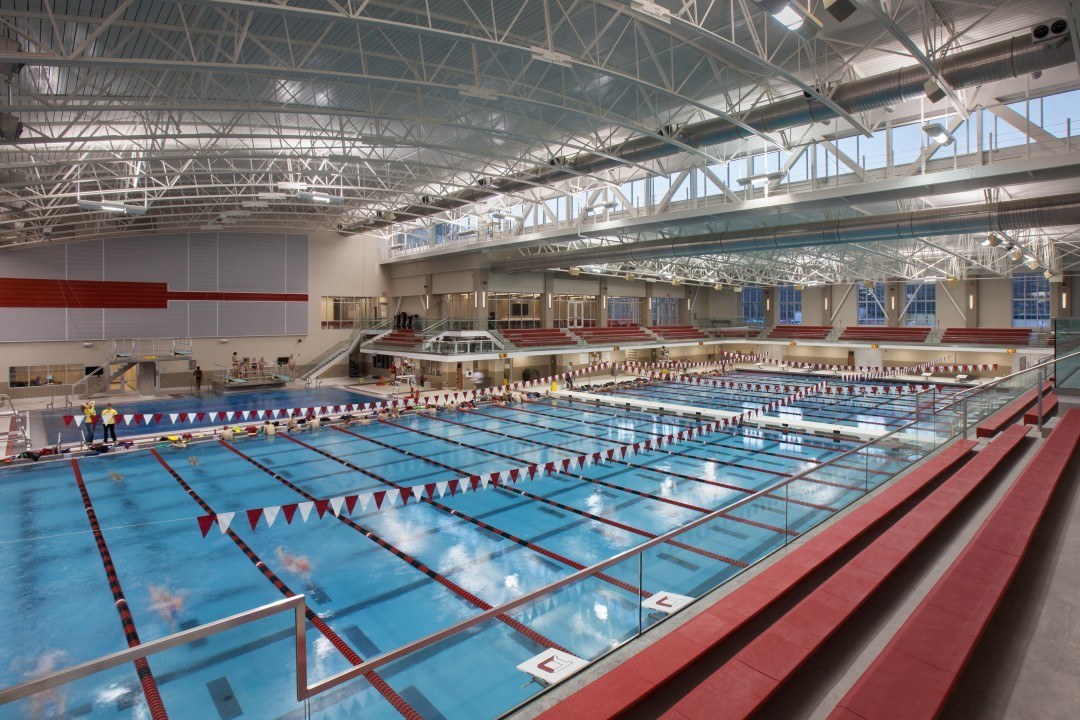 Denison defeated Kenyon in a continuation of the most storied rivalry in Division III swimming and diving. Archive photo via Fentress Photography

Denison and Kenyon are seperated by fewer than 30 miles on a map, but represent two of the biggest powerhouses in NCAA Division III swimming and diving. Kenyon dominated DIII from 1980-2010, a span which included 31 straight national championships for their men’s team. That NCAAw record has yet to be matched by any school, at any level of the NCAA. Times have changed, however, and rivalry between the two schools has entered a new phase since Kenyon’s streak was ended. Denison’s men have won 3 times since 2011, but the two schools have continued battling for the title. On the women’s side Kenyon won the national championship from 2007-2009.

The men won 10 and the women 12 events in a dominant showing for the Denison Big Red. The day included 12 NCAA ‘B’ cut times for Denison, including two ‘B’ cut swims from senior Carolyn Kane and two from junior Halli Garza.

Up next for Denison is the Miami Invitational in Oxford, Ohio on December 1-3, while Kenyon heads to the Ohio State Invitational which runs from November 18-20 in Colombus.

Denison’s other NCAA cut came in the 1-meter dive where Brian Allen won with a six-dive score of 290.93.  Michael Burke was second with a score of 272.18.

The Big Red returns to competition on December 1 when they travel to Oxford, Ohio for the three-day Miami Invitational.

Powered by 12 event wins, Denison women’s swimming & diving rolled to a 192.5-106.5 victory over Kenyon College on Saturday at the Trumbull Aquatics Center.

Denison piled up nine NCAA ‘B’ cut performances at the dual meet. Seven of the nine provisional times were season-best performances.

KT Kustritz continued to raise some eyebrows as she improved upon her provisional qualifying time in the 100 breaststroke by hitting the wall in 1:02.98.  She also won the 200 breaststroke in 2:19.44.

The Big Red will return to competition on December 1 when they travel to Oxford, Ohio for the three-day Miami Invitational.

GRANVILLE, Ohio – Kenyon College‘s annual, early-season, dual meets with rival Denison University continued Saturday with the latest installment taking place in Trumbull Aquatic Center. The host Big Red used the home venue to their advantage and pulled away with a 173.5-124.5 victory over the visiting Lords.

On its way to winning 10 of the 16 scheduled events, Denison swept the two diving competitions, the two backstroke races and the two relay races. The Big Red also picked up early momentum by winning three of the meet’s first four events.

Kenyon’s lone win in those first four events came from freshman Connor Rumpit, who posted a first-place time of 9:39.01 in the 1,000-yard freestyle. Later in the meet, Kenyon proved to be strong in distance events once again, as senior Arthur Conover clocked in at 4:35.54 to claim victory in the 500-yard freestyle.

In between those two Kenyon event victories, senior Austin Pu and sophomore Jon Zimdars tacked on two more wins for the Lords. Pu did so with a winning time of 21.12 in the 50-yard freestyle, while Zimdars raced to a first-place showing in the 200-yard butterfly with a time of 1:52.62, which cleared the ‘B’ standard for NCAA Championship qualification.

Kenyon’s other two event wins came from senior Ian Reardon and freshman Mick Bartholomew. Early in the meet, Reardon took the 100-yard breaststroke with a time of 57.86. Late in the meet, Bartholomew outlasted Reardon in the 400-yard individual medley. Bartholomew won the race with a time of 4:01.33, while Reardon settled for second in 4:04.94. Both of those times also cleared NCAA ‘B’ cuts.

Next up for the Lords is a trip to Columbus, Ohio to participate in the three-day Ohio State Invitational. That meet will get underway Friday, with preliminary heats at 11 a.m. and final heats kicking off at 6 p.m.

GRANVILLE, Ohio – The Kenyon Ladies had a few top performances but weren’t a threat to defeat Denison University on Saturday afternoon as the Big Red won 192.5 to 106.5 at Trumbull Aquatics Center.

Sophomore Abby Wilson had a first-place finish in the 200-yard freestyle and later claimed a runner-up finish in the 50 free. In the 200, Wilson touched the wall in 1:53.11 and she completed the 50 with a time of 24.36. The Columbus native later swam a leg in the 400-yard freestyle relay, another event the Ladies claimed.

In another relay, the 400 freestyle, Orbach-Mandel, Wilson, Zoe Toscos and Princess Vilan Ferguson-Nguyen  claimed the top spot in 3:29.40.

Orbach-Mandel also claimed an individual event title in 100 freestyle. She registered a time of 51.58.

Rounding out Kenyon’s best performances included Julia Wilson‘s second-place showings in the 100 and 200 breaststroke events, Otazu’s runner-up spot in the 100 backstroke and Ellie Crawford‘s third-place mark in the 400-yard individual medley. Additionally, Sydney Matteson took third during the 200 backstroke and Duncan placed third in the 100 breast.

In diving competition, Madeline Carlson came in fifth in the 1-meter event and seventh in the 3-meter.

Next up for the Ladies is a trip back to Columbus for The Ohio State Invitational on November 18-19.

Bartholomew’s 4IM and Hohm’s 2free were big early season swims. Pretty sure those are the fastest I’ve seen in those events at this time of year in D3. Kenyon has had guys under 4:00 at invitationals around this time but I assume those are pseudo-tapered and/or suited swims.

The only caveat I would make is that the level of focus placed on academics and the level of academic rigor at a junior college may not be super comparable to most D3 schools. The whole purpose of D3 is for students to pursue excellence in far more than just their sport and other extracurricular activities. So, while there are many great D2 and Junior College swim programs, if those same people were placed under the same academic stresses and demands as their D3 counterparts…their performance in the pool may not be quite as strong.

I say all this only to point out that if D3 student-athletes didn’t have as much school work to do, they might be as fast… Read more »

D3 is way faster than D2. Just take a look at the NCAA qualifying times.

This just isn’t accurate. 10 years ago, yes, D3 was faster. Take a look at NCAA results. In most events, D2 is faster top end and has more depth. The qualifying time comparison is not the best. Both use an invitational style selection process, so qualifying times only tell a small part of the story. Look at NCAA meet results.

In my experience as a DIII swimmer, that is true in many, but not all, cases. There are some athletes who choose to put in the extra effort (and valuable time) throughout the season, and perhaps more importantly, over the long offseason. From my experience – that’s the biggest difference between D3 and D1. D3 swimmers almost always prioritize doing something career-related with their summers, which almost always comes at the expense of swimming. At least that was the case at my school. That filters down even to the swimmers without jobs/internships/summer classes, who feel like they shouldn’t be swimming in the offseason either.

Kenyon may have had the record at the time but I believe Indian River is up to 41 national championships in a row (men’s) and 33 (women’s) so they would have that record now. And before anyone points out that they are only a junior college, I would like to note that all you have to do is look at their team records to see that they would be very competative with ANYONE at the D3 level. Many of their team records are faster than the D3 national records.

I believe the men’s team is actually up to 48 now. Definitely an impressive record

Step 1 – It literally says “at any level in the NCAA.” It’s a statement of fact that IRSC is not in the NCAA.
Step 2 – so you’re comparing the fastest single swimmer in each event at IRSC from a span of 41 years to the fastest current swimmer in each event at a D3 school? Sounds reasonable. IRSC is a fine program, and serves a fine purpose for athletes who need some time to develop athletically and academically between high school and college, but don’t fool yourself into believing that they’d be “competitive with ANYONE at the D3 level.” If IRSC were in D3, I would bet they wouldn’t have a single D3 team national title. Not… Read more »

No I was comparing Indian River’s fastest ever to everyone in D3’s fastest ever. I just wanted to note that Indian River had an incredible record as well but since you brought up their ability to be competitive, I would like you to check the men’s 50 free, 100 free, 200 free, 100 fly, 200 free relay, 200 medley relay, and 400 medley relay to see just how competitive Indian River would be at the D3 level. Despite my inability to think as intelligently as yourself, I believe I am justified in saying they would be competitive with ANY D3 team.

I’ll grant that IRSC has more titles, faster times per event record, and more titles. However, they’re pretty much the only game in town as it concerns the NJCAA. After the top 3-4 swimmers in each event at nationals, the quality drops off rapidly. The top 16 at D-3 nationals is much deeper than NJCAA, and for NAIA, for that matter.

On a similar note, the NAIA could claim that they’re faster than D-2 or -3. However, the NAIA is nowhere near as deep and they have fewer members (and decreasing annually as colleges go to D-2 or -3). The NAIA has much different recruiting and scholarship rules, perhaps why you see so many international swimmers at places like… Read more »