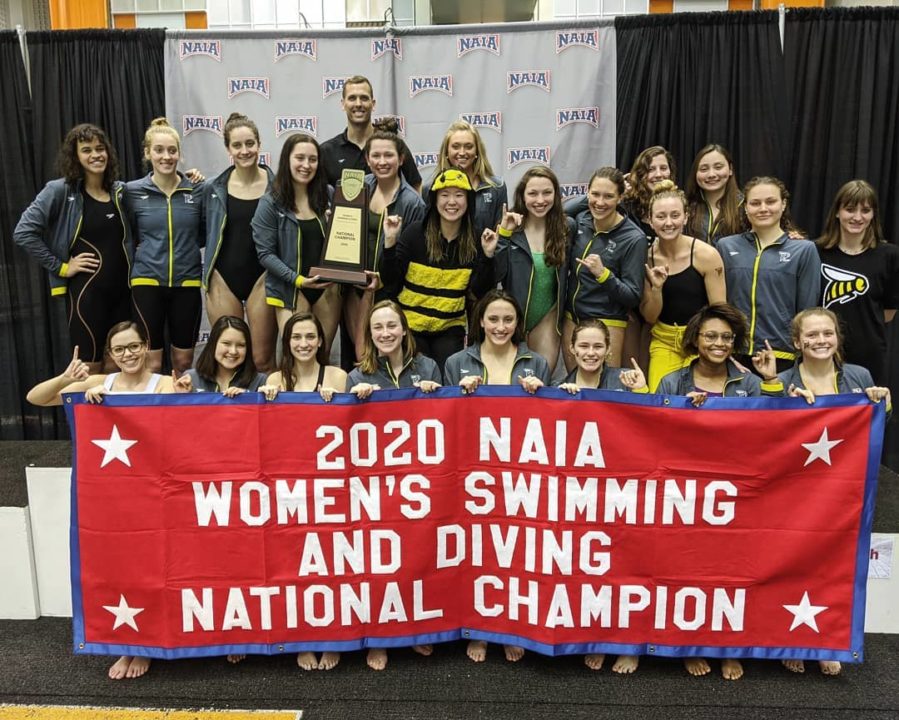 The Savannah College of Art & Design, or SCAD, has canceled all of its winter season intercollegiate athletics, after having previously canceled the fall sports season due to the ongoing coronavirus pandemic.

This means that the school’s powerhouse swimming & diving program won’t participate in the 2020-2021 NAIA season. The information, distributed to artist-athletes on Monday, also says that practices will be canceled until the spring.

The school has campuses in both Savannah and Atlanta, Georgia, and both campuses have athletics programs. The swimming & diving team is based out of the Savannah campus.

The school has already gone to a mostly-virtual class lineup for the fall quarter, which runs until November 19.

SCAD has become one of the top programs in the NAIA. Last season, the SCAD women won the NAIA National Championship by 143.5 points over Keiser University. The SCAD men were 2nd, 62 points behind Keiser. For the SCAD women, that was a third-consecutive NAIA title and its fourth in five seasons.

Like about half of the states in the country, and the country as a whole, Georgia has begun to see a slow increase in the number of new coronavirus cases after bottoming-out in late September. While the numbers are still only about a third of where they were at their peak in July, the state’s 7-day average of 1,314 new daily cases is a slight increase from earlier this month.

Chatham County, where Savannah is located, has fared better than most of the state overall and continues to see a general decline in the number of new coronavirus cases.

The NAIA, meanwhile, is moving forward with both its fall and winter seasons, though it has given fall sports a flexible option to play in the spring. The 2021 NAIA National Championship meet is scheduled for March 3-6 at the Allan Jones Aquatic Center in Knoxville, Tennessee.

Other winter season sports at SCAD impacted by the decision include men’s and women’s bowling, equestrian (a non-NAIA sport), and the League of Legends E-Sports season.

Sorry for not being relevant, but any idea when the college team rankings will be coming out? I feel like most duel meets are starting next week.

Sad for these student-athletes and their coaches. Hopefully Savannah College of Art & Design will have to close it’s doors for lack of funding. Then the administrators who make these bone head decisions can start serving fries, cheeseburgers and coke at fast food restaurants.