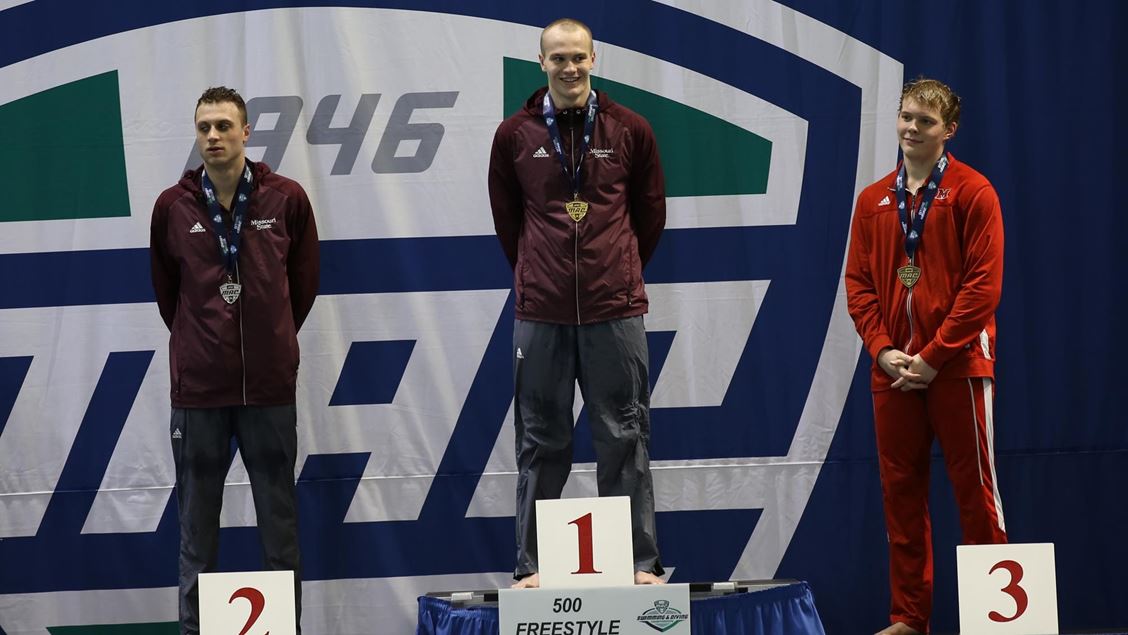 Missouri State won all 4 swimming events on Tuesday, but Miami's divers kept them in the lead after 2 days at the 2019 MAC Championships. Archive photo via Missouri State Athletics

Round 1 of the 2019 MAC Conference Championship on Monday meet went to the Miami University men, who swept the 2 relays and broke 3 school records.

The defending conference champions fought back on Tuesday, though, sweeping the day’s 4 swimming events.

A huge diving performance from a pair of seniors, though, kept Miami in the lead, by a slim 3-point margin, at the end of the day.

Missouri State freshman Pawel Krawczyk won the men’s 500 free in a new Pool Record of 4:20.67. That broke the Pool Record at the Nixon Natatorium that was set in 2017 by then-high school swimmer Grant House (who now swims at Arizona State). That improves on his previous lifetime best of 4:21.66 and jumps him to 2nd-place in school history.

That led a 1-2-4-5-7 finish for Missouri State that pulled his team briefly into the lead.

In the next race, Missouri State senior Artur Osvath won the 200 IM in 1:45.91. That’s a season-best for him, and won the race by over a second, but misses his personal best. That win, though, didn’t keep Miami from earning back the lead in the team battle. This time they had the depth with 4 swimmers in the top 8 and 5 scorers overall.

In the day’s final individual race, Missouri State got another win. This time it was senior Lucas Paloschi. He won by the slimmest-of-margins, .01 seconds, ahead of both Nic Wamsley and Nick Ward of Miami. Former Arizona Wildcat Blair Bish won the B Final for Missouri State in 20.43 (they also won 2 of the 3 swimming B finals on the day).

While Missouri State was dominant at the top of the swimming events, the Miami Redhawks had a pair of aces up their sleeve: senior divers Harrison Moncino and Ryan Nash. They went 1-2 on the men’s 1 meter, with Moncino winning with a score of 344.25. While Missouri State’s Michael Claunch took 3rd, the Miami 1-2-5 finish was enough for them to hold on to the lead after the end of day 1.

And with that dive, Harrison Moncino is your 2019 MAC Champion in the 1-mtr dive!! #RiseUpRedHawks pic.twitter.com/VkSYtWpMET

Miami and Missouri State combined for 18 of the 24 A-finals swims on day 2 of the meet. Southern Illinois scored the other 3.

This was such an exciting meet to follow when Buffalo and EMU were there. Now it’s just kind of a glorified dual meet.

That was my thought exactly. This was the MAC before SIU, MSU, and Evansville entered the mix

That’s the link that’s on the official site too. We’ve asked for a better one…

I heard James Mcguire is planning on winning the 400 IM by 10 seconds in finals. Look out for him.