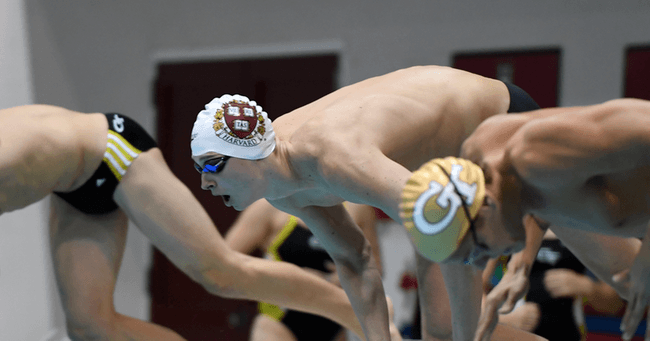 Harvard's men had a double dual against Rider and Bryant, coming away with victories against both and winning all but 3 events. Archive photo via Harvard Athletics

Harvard vs Bryant vs Rider

The Harvard men’s team hosted Bryant and Rider for a double dual on Saturday, January 20th. The Crimson women’s team did not participate in the meet, but the Rider and Bryant women’s teams did. Harvard cleaned up in the men’s meet, winning against both opponents by about 150 points, while Bryant bet Rider handily in the women’s meet.

Bryant’s Benjamin Schulte won the men’s breaststroke events, posting time of 57.03 and 2:06.71, providing Bryant its only wins in the men’s meet. Schulte’s season best times of 55.02 and 2:05.02 are the fastest times in the MAAC (Metro Atlantic Athletic Conference) this season.

Rider’s lone win in the men’s meet came from Zachary Molloy, who won the 100 free convincingly with his time of 45.96. Like Schulte, Molloy’s season best time of 44.95 leads the MAAC rankings.

Raphael Marcoux won the men’s 100 fly with a season best time of 48.42. That time is currently ranked 7th, and is the only time other than teammate Steven Tan‘s that was not set at an invite.

Bryant freshman Trevor Hazelwood broke the school record in the 1 meter, where he placed 6th with his score of 278.60. The previous record was 277.55 from 2013.

CAMBRIDGE, Mass. – Returning to Blodgett Pool for the first time in 2018, the Harvard men’s swimming and diving team picked up two wins over Bryant and Rider on Saturday afternoon.

In the 1,000-yard freestyle, senior Kent Haeffner finished second trailing only teammate junior Brennan Novak, who claimed first in the event for the second time this season.  Touching the wall with a time of 9:28.84, Haeffner clipped five seconds off his time from last week against Penn (9:33.73).

Sophomore Dean Farris swam away for the first-place finish in the 200-yard backstroke, touching the wall with a time of 1:45.80 – five seconds off the Blodgett pool record. Fellow sophomore Raphael Marcoux edged out Rider sophomore Justin Carey for first place in the 100-yard butterfly, finishing with a time of 48.42.

Seniors Bobby Ross and David Pfeifer highlighted the Crimson on the boards. Ross finished first in both the 1- and 3- meter dives, posting scores of 332.55 and 376.50, respectively. Pfeifer registered a second-place finish in the 3-meter dive with a score of 359.55, after collecting third-place in the 1-meter (298.25) earlier in the day.

Freshman diver Austin Fields also had a solid performance on the boards, posting a second-place finish in the 1-meter dive (300.20) and third-place in the 3-meter (321.15).

The Crimson closed out a dominating afternoon in the pool the same way it began, with back-to-back top-place finishes in the 400-yard relay. The foursome of seniors led by Morgan-Scott touched the wall with a time of 3:05.44, one second ahead of the quartet of Levente Bathory, Daniel Tran, Mahlon Reihman, and Eric Whisenant.

What’s Next
Harvard returns to Blodgett on Feb. 2 with the two-day Harvard-Yale-Princeton meet. Action gets underway at 6 p.m and will be broadcast on the Ivy League Network.

SMITHFIELD, R.I. – Freshman Trevor Hazlewood (Corpus Christi, Texas) broke the 1-meter dive school record, finishing with a score of 278.60, but the Bulldogs fell to Harvard and Rider in a double-dual meet in Cambridge, Mass. on Saturday afternoon.

“The men competed against two very strong programs today. Harvard and Rider are very talented. We stayed very tough throughout the meet. Ben had one of the best meets of his collegiate career and Trevor broke a school record! We look forward to seeing Rider again in Buffalo at MAACs in a few weeks when we are healthy and rested.”

Bryant heads to Poughkeepsie to take on Marist at 1:00 p.m. on Saturday afternoon.

“It was a great team effort for the women today. They swam strong and showed great depth in many events. We like where we are at this point in the season. We had many women win multiple events and we remained strong today, even though we came off a very difficult training phase in the season.”

Bryant heads to Poughkeepsie to take on Marist at 1:00 p.m. on Saturday afternoon.

Cambridge, MA – The Rider University men’s swimming and diving team closed out its 2017-18 dual-meet season with a split against Harvard and Bryant on Saturday afternoon at Blodgett Pool on the Crimson’s campus.

Up Next
Saturday was the final dual meet of the 2017-18 season as the Broncs set their sights on championship season. Rider returns to action in two weeks on February 14-17, competing in the four-day Metro Atlantic Athletic Conference (MAAC) Championships. The Broncs have won six straight conference titles and have their eyes on a seventh in a row. The event is contested at Eerie Community College in Buffalo, New York.

Cambridge, MA – The Rider University women’s swimming and diving team closed out its dual-meet schedule with a 185-115 loss to Bryant at Blodgett Pool on the campus of Harvard University on Saturday afternoon.

The Broncs finish the season with a 2-6 overall record, while the Bulldogs earned their fifth victory of the year.

Up Next
Saturday was the final dual meet of the 2017-18 season as the Broncs set their sights on championship season. Rider returns to action in two weeks on February 14-17, competing in the four-day Metro Atlantic Athletic Conference (MAAC) Championships. The Broncs have finished second the past two years at the event, which is contested at Eerie Community College in Buffalo, New York.

Epic. Legend has it he used open turns on this swim…

and with his head tarzan-esque above the water

Actually he got out after every 50 and did ten burpees.

I believe that the top 4 finishers in the 200 free from last year’s NCAA championship meet will be back to battle again.

Dylan Carter, Blake Pieroni, Townley Haas and Golden Boy Dean Farris swam an exciting race. Dylan led most of the way, capitalizing on his turns. Townley made his move in the final 50 to take the title. Dean swam in Lane 1 and came in 4th.

Top 6 actually. Pieroni is in great form so far too. We had 3 guys go 1:30 last year, and I expect them to again and possibly a couple others (Held, Craig, Farris, Rooney, Switowski, and Dressel wouldn’t shock me if they joined the club).

I think it’s one of the Races to Watch at the meet. Townley will have to be razor sharp to win it this time.

Now if Dean wins, the Internet may break.

I don’t see why seeing as how the position isn’t different from last year.

This could be a solid young summer Us 800 relay Team …..with some changes here and there …

He is a poser and will be defrocked at NCAAS

Why is Dean Farris the meme of swimming.

Dean Farris swam 1:35 while carrying an adorable cat on his back (hence the need for open turns).

He was a 1:39 when he committed to Harvard and last year he threw down a 1:31 for an astounding 3 second (might have to verify me on this) drop. He’s obviously smart and typically you don’t have Ivy League swimmers making a mark on the national scene. He just seems like a likable dude who’s talented on multiple fields of life

I heard the pool opened like the red sea, right down lane 4, and he swam on concrete, would have been 1:33 but had to make an extra stroke with his bloody nubs

The blood was, of course, not his, but the concrete’s after prolonged contact with his physique

This month, Harvard Magazine did a story on Dean and his swimming career.

You mean Dean Farris Magazine did a few extra stories on Harvard.

you know I hear Dean Farris waits until the last possible moment to make the jump to lightspeed and win.

Dean Farris did the Kessel run in 11 parsecs.