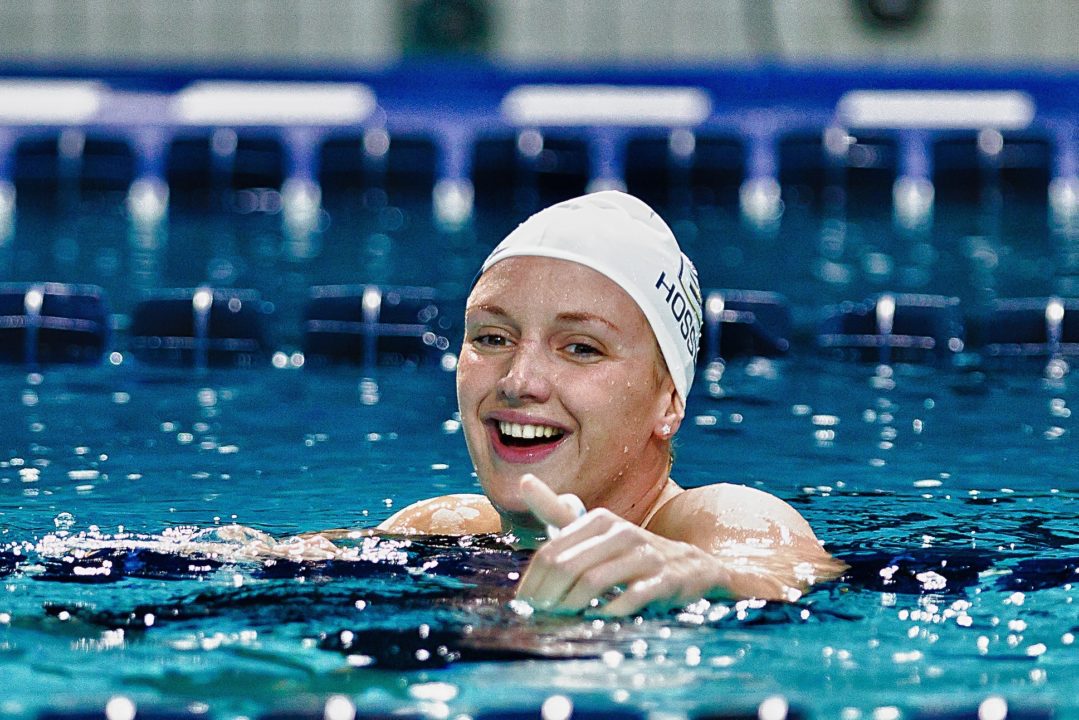 Three young Bulgarian swimmers say their federation required them to take pills at a training camp, leading to the trio testing positive for stanozolol.

Sarah Sjostrom Returns to the Pool 3 Weeks After Elbow Surgery

Sarah Sjostrom was in the pool for the first time in 3 weeks on Monday morning after undergoing surgery to repair a broken elbow.

After breaking the world record in the 400 freestyle last weekend France’s Yannick Agnel began European Championships with a whimper winning the event in a time of 3:37.54 over five seconds slower than his record setting time of 3:32.25.

Agnel may have his sites more focused on the 200 freestyle world record which alluded him at the French Nationals, “I had to control this race and win it because I have to think about two more races, the 100m and 200m freestyle.”

Hungary’s Katinka Hosszu started her seven events program with a win in the 200 IM in a time of 2:05.78. Hosszu who just came off a marathon World Cup journey where she swam 39 events equalling 104 swims (42 heats and 62 finals) and totalling 27.6 kilometres in 40 days will be swimming seven events at this year’s European Short Course Championships.

“The race was quite all-right for me. It wasn’t as tough as I expected it to be.”

Great Britain’s Hannah Miley, who is scheduled to swim 10 events, finished second in a time of 206.21.

“I’m really happy and satisfied with this race, I didn’t expect to be that fast. I want to start in ten competitions here – just as long as I can do it. We changed my training programme and it works. I take this event as competitive training.”

Hungary’s Zsuzsanna Jakabos finished third in a time of 2:06.66.

Katinka Hosszu is not used to much rest, which is good because she won’t be getting much. Hosszu went on to win the 200 fly which started less than 15 minutes after her 200 IM and she took the time in between to give the media a quick quote!

She commented on the how she felt after the 200 fly, “I’m having haevy legs now. It’s quite amazing that clocked exactly the same time as in the 200m individual medley just 15 minutes before… I always checked where I was during the race and thus controlles it.”

“It’s quite a good time, because I’m training really hard for the World Championships in two weeks time. I had a two-day rest before this event.”

The top three qualifiers from early in the evening finished in the same order in the final. Olympic Champion Florent Manaudou of France won in a time of 20.70, Vladimir Morozov of Russia finished second in a time of 20.89 and Manuadou’s teammate from France Frederick Bousquet finished third in a time of 20.97.

Manaudou’s reaction after the race was short and sweet, “Goal achieved!”

In the semi finals Vladimir Morozov broke the Russia National Record finishing in a time of 20.79.

“Unbelievable! I would never have thought to win here. I don’t know whether anybody from the Czech Republic has ever achieved a women’s breaststroke medal. Four weeks ago I couldn’t have envisaged to swim that fast.”

The French men picked up the third victory of the evening for the host country winning the 4 x 50 Medley Relay in a time 1:32.35.

Frenchman Giacomo Perez Dortona who swum the breaststroke leg of the really commented on the win,”This is my very first international medal, and I’m thrilled to share this joy with my team-mates from Marseille Frédérick Bousquet and Florent Manaudou.”

In one of the most exciting races of the evening the Denmark narrowly defeated Finland. Denmark held the lead at the 150 meter mark after Laura Kurki out swam Julie Levisen in the third leg of the relay, but Perville Blume came roaring back on Hanna-Maria Seppala to give Denmark the win in a time of 1:38.10.

Both team’s were extremely happy with the result

Kelly Riber Rasmussen commented on the win, “For me as a young swimmer this is a really overwhelming success.” None of us four had ever reckoned with gold.”

“The team swam a fantastic race. Finally we have gained a relay medal again, which we certainly didn’t expect. Though it was close with the Danes, we are happy,” said Hanna-Maria Seppala of Finland.

Is Morozov not swimming at USC this semester?

He is not. Taking a semester to focus on international competition like Shields (Colupaev is doing the same); everyone I’ve talked to says he’ll be back in January.

does he still want to swim for the US?

3 gold medals for France! Not surprising. And there will be many more. The country is now, thanks almost exclusively to freestyle, in the top 5 in the world, very far behind the USA but in the mix with China, Japan and Australia, so it’s logical they dominate this competition with a big team, with motivated swimmers who are at home.
The men’s 200 free world record, the women’s 200 free world record and the women’s 400 free world record have a good chance to be broken, of couse if Yannick Agnel and Camille muffat still have enough energy. They are not robots.

Indeed, French swimming is going extremely strong. Do bare in mind that other European powers (Germany, Spain, Netherlands and Great Britain) have sent very small and largely experimental squads though.