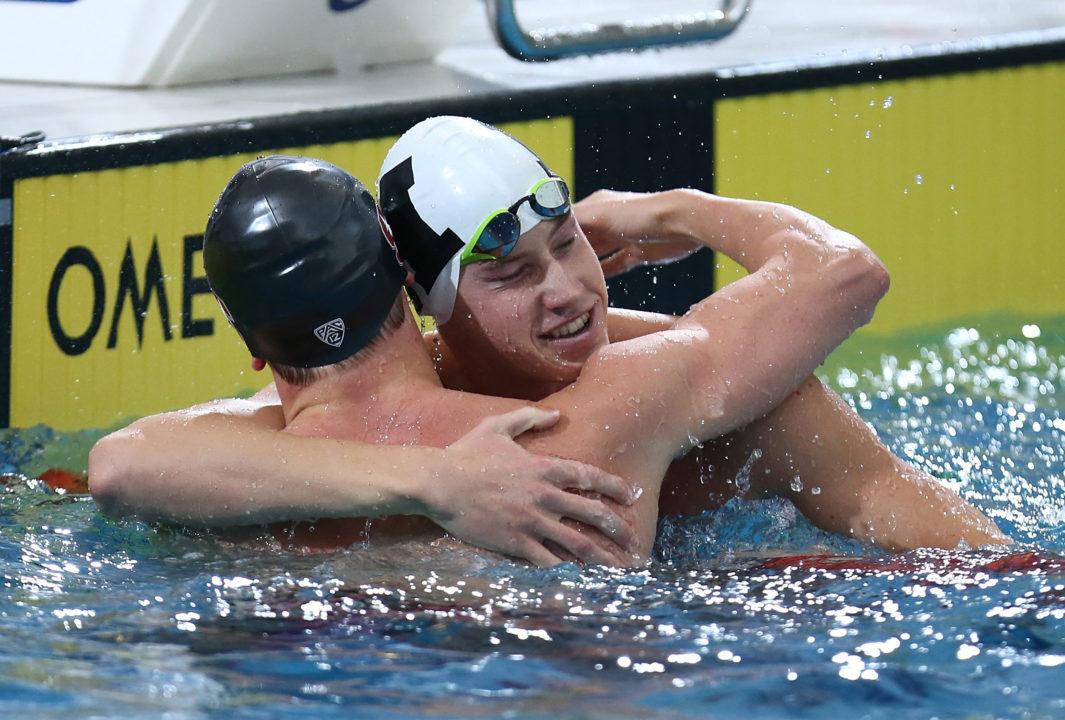 New Zealand teammates Sam Perry and Daniel Hunter congratulate one another after both having notched World Championships qualifying times in the men's 50m freestyle. Current photo via David Rowland/www.bwmedia.co.nz

The list of Kiwi swimmers having qualified for this year’s World Championships keeps growing, as additional time cuts were achieved on day 3 of the New Zealand Open Championships. 21-year-old Bradlee Ashby missed the Budapest-qualifying mark in the 400m IM on day 2, but took revenge on the sprint IM in tonight’s heats. Clocking a swift time of 1:59.54, Ashby knocked .02 off of his own New Zealand national record in the event, while also comfortably dipping beneath the 2:00.22 qualifying mark for Worlds.

Of his achievement, the Fairfield Swimming Club athlete commented, “The feel from the first 100 going into the breaststroke felt so much better than this morning. Something I have been working on with my coach Jerry (Olszewski) is that back-end freestyle with the kick coming in on the way home and the way I controlled it set me up well for it.”

“Yesterday was a big day with a 200m free and a big PB in the 400 medley after several years of not swimming it. So to back-up tonight is incredible. It feels amazing personally to come here and do a PB and to swim fast is very encouraging especially under Jerry’s coaching.”

Fellow Olympian Helena Gasson also saw success in the women’s 200m IM event tonight, notching a World Championship qualifying time of her own. Gasson notched a time of 2:13.14 to take the win, adding this event to the 50m butterfly for which she already qualified on day 1. After her feat, Gasson commented, “I just gave it everything I had. I didn’t want to leave anything behind. I am so happy to do a qualifying time in an Olympic event.

“I knew I had to nail the freestyle part of the leg and luckily I managed to hit it how we planned to. It gives me a lot of confidence. I have such a range of events that I can contest in now so I am definitely excited for my future in this sport.”

A pair of men got the job done in the splash n’ dash, with Sam Perry and Daniel Hunter both earning marks under the Budapest qualification time. In the morning, Perry, who competes for Stanford in the U.S. roared to the wall first in a time of 22.47, equaling the qualifying time for Worlds. Hunter’s prelims swim of 22.48 was just off the target, but he soon made up for that in the evening by winning the final race in 22.39.

For Hunter, the close call wound up being a big relief. “It is indescribable really,” said the Howick Pakuranga swimmer. “I’ve been feeling sick all day as last year was going through my mind constantly. To knock it off and tick the box is awesome. It wasn’t my best time but I think this swim here was about qualifying.”

For his part, Perry is excited that there’s a pair of men representing New Zealand in the big boy 50m freestyle race. “I was relieved to make the time this morning but gutted for Dan and so I was really pleased he got the job done tonight.

“It is always challenging going from the bathtub to the big pool. I am really happy to have been able to hold it together and happy to get another chance to do it at the world champs and hopefully we will both be in even better form there.”

The 5th qualifying time of the successful day of racing came in the morning, with teen Gabrielle Fa’amausili‘s 50m freestyle outing in prelims. The 17-year-old United Swimming Club athlete fired off a quick 25.02 to register a time under the 25.18 qualifying mark. Her time fell just .01 shy of the national record, which has been held at 25.01 by Hayley Palmer since 2010. Fa’amausili would ultimately win the event tonight in 25.26.

Is the 800m free not competed at World Champs for both men and women? I thought that it is…

800 free for men has been part of the previous few WC’s but never at the Olympics (have not looked at order of events for this summer).

Looking Good! There’s some good looking swims this week and there seems to be more depth than in the past.