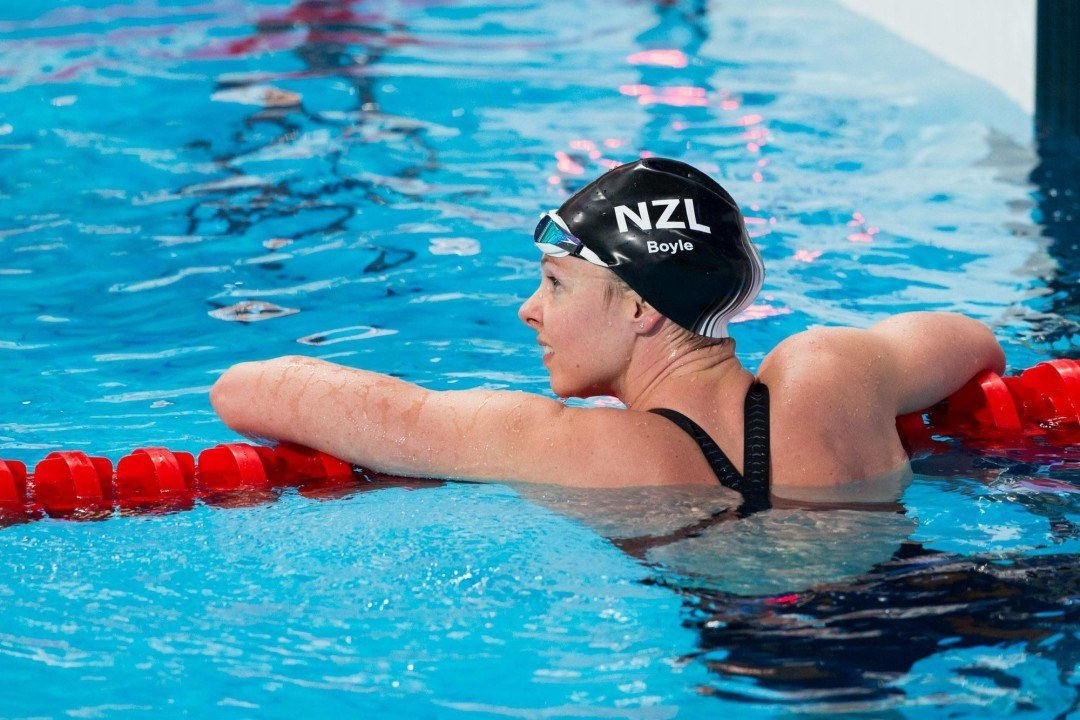 2016 Olympian Lauren Boyle will be joined by 11 teammates on their way to the World Championships in Budapest this July. Archive photo via Tim Binning/TheSwimPictures.com

Swimming New Zealand has announced its 12-strong roster for the 2017 World Championships in Budapest. Along with open water swimmer Charlotte Webby and 2016 Olympian Lauren Boyle, the remainder of the qualifiers were selected based on times at the recently concluded New Zealand Open Championships in Auckland. We previously reported how Boyle, who is still nursing a nagging injury, planned on sitting out of her nation’s championships, but received notification her times from Rio would indeed qualify her for Budapest.

The average age of the Worlds roster is 21, with notable teens Gabrielle Fa’amausili and Bobbie Gichard among the line-up. The 9 swimmers having attained individual qualification in the pool is New Zealand’s highest number since 2005, a fact with which new national head coach Jerry Olszewski is pleased.

“The quality of performances at the national championships was better than expectation and it was very pleasing especially from the young swimmers,” Olszewski. “Basically all of this team and a number who just missed teams we have a healthy group of swimmers as we prepare for Tokyo 2020 and beyond.

“I am encouraged by the size of the team which was more than we expected. I was impressed that the swimmers who had come back from the NCAA championships in USA have been able to produce strong performances which is challenging coming from a major short course event in yards and converting to long course in metres.

“The feedback from those swimmers is that there is more support now and certainly a more positive vibe on pool deck.

“The young swimmers like Gabrielle, Bobbi, Hayley McIntosh and Latacia Transom who is based in Australia but just missed the team, and some younger male swimmers like Lewis Clareburt are exciting for the future.

“Others like Andrew Trembath, who had stalled in his swimming development of late, has moved forward and others like Matt Scott from Gisborne have improved significantly. It is very encouraging.”

The squad will now head to Flagstaff, Arizona for altitude training, an important component of the fresh roster’s preparation says Olszewski.

“Altitude training for swimmers is commonplace in the US and was a regular thing in the past for New Zealand swimmers. It will become an integral part of our plans going forward. For some it will be a first time and we will ease them through that but others, like Lauren, have been regulars in training at altitude.”

Most qualifiers because Swimming NZ has slowed down the qualifying standards to pad their stats after they lost 40% of their state funding after Rio.

NZSWIM, this statement is absolutely false. As with your facebook page, you make every attempt to cut New Zealand Swimming and our swimmers down. You need to crawl back into your hole.

Slowed down? They are FINA A standards, the same as most nations are using. For a nation of 4 1/2 million people, not exactly a power house swimming nation I suggest these are tough enough.