Day 3 Finals Preview: Three or More World Records on the Bullseye for Tuesday 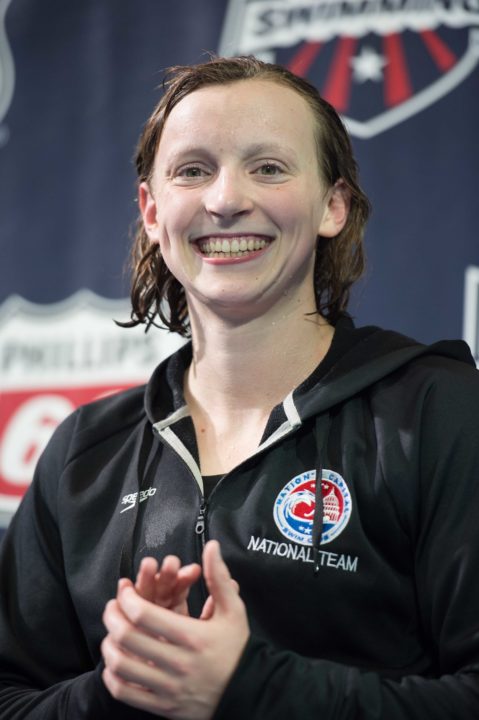 We've already seen one 16-year old break a World Record at this meet. Will we see another on Tuesday? (File Photo: Mike Lewis/OlaVistaPhotography.com)

The story of the finals on day 2 is record watches; with 8 total races, there could be as many as four different World Records broken. First, the schedule for tonight:

A reminder of all the links you need to follow the meet.

The most obvious World Record on notice is Ruta Meilutyte’s in the 100 breaststroke; though as many have pointed out, breaking it in the semi-finals and then repeating it in finals can be a challenge. Note, though, that Rebecca Soni did just that in the 200 breast at the Olympics, so it wouldn’t be unprecedented.

It might be more of a stretch, but both Katie Ledecky and Lotte Friis looked comfortable to their 15:49’s in prelims of the women’s 1500 freestyle. That’s still 7 seconds away from the 15:42.54 set by Kate Ziegler in 2007, now the only long course World Record from before the supersuit era, but expect them both to at least make a run at the mark.

In the men’s 50 breaststroke, South Africa’s Cameron van der Burgh was a 26.78 in prelims. As he seems to gain more confidence in his ailing knee with every swim, that’s within a tenth of the World record he set at the 2009 World Championships in 26.67.

There’s also an outside shot of Missy Franklin or Emily Seebohm taking a run at the 100 backstroke World Record. They were both very close in London in 2012, but nobody has been great through two rounds of this event (59.3 is the closest we’ve seen, which is over a second away from Gemma Spofforth’s 58.12).

One event where it doesn’t look like anybody’s going to get close to a record is the men’s 100 backstroke, but it could be the most exciting final of the night. Every single one of the eight finalists has a legitimate chance to take gold, and I don’t say that lightly.

Another eye will be on an intriguing women’s 200 free semifinal that comes later in the session. That will see Missy Franklin, Katinka Hosszu, Camille Muffat, and Melanie Costa-Schmid, who have had different levels of success so far in this meet, as well as some intriguing names like Bronte Barratt, Charlotte Bonnet, and Femke Heemskerk. My biggest question is around Sarah Sjostrom from Sweden. After winning the World title in the 100 fly on Monday, she expended a ton of emotional energy. She implied on her Twitter account this morning that she wasn’t exactly thrilled with her prelims swim in the 200 free (1:57.64), but felt that she could be better in the semi-finals.

So, the question then becomes will having the weight off of her shoulders in that 100 fly free her to have some good swims in the rest of her events? Or did she put so much into that win that she will be spent? As of now, she’ll have to be better tonight if she wants the chance to find out in Wednesday’s finals.

There is something oddly familiar with the podium for the 100 back..

Am I the only one who has sometimes has problems remembering Connor Dwyer and Conner Jaeger are two different people?

that was a heck of a swim by Agnel

OMG!!! I did not even see Dwyer in there

So much for Agnel being out of shape