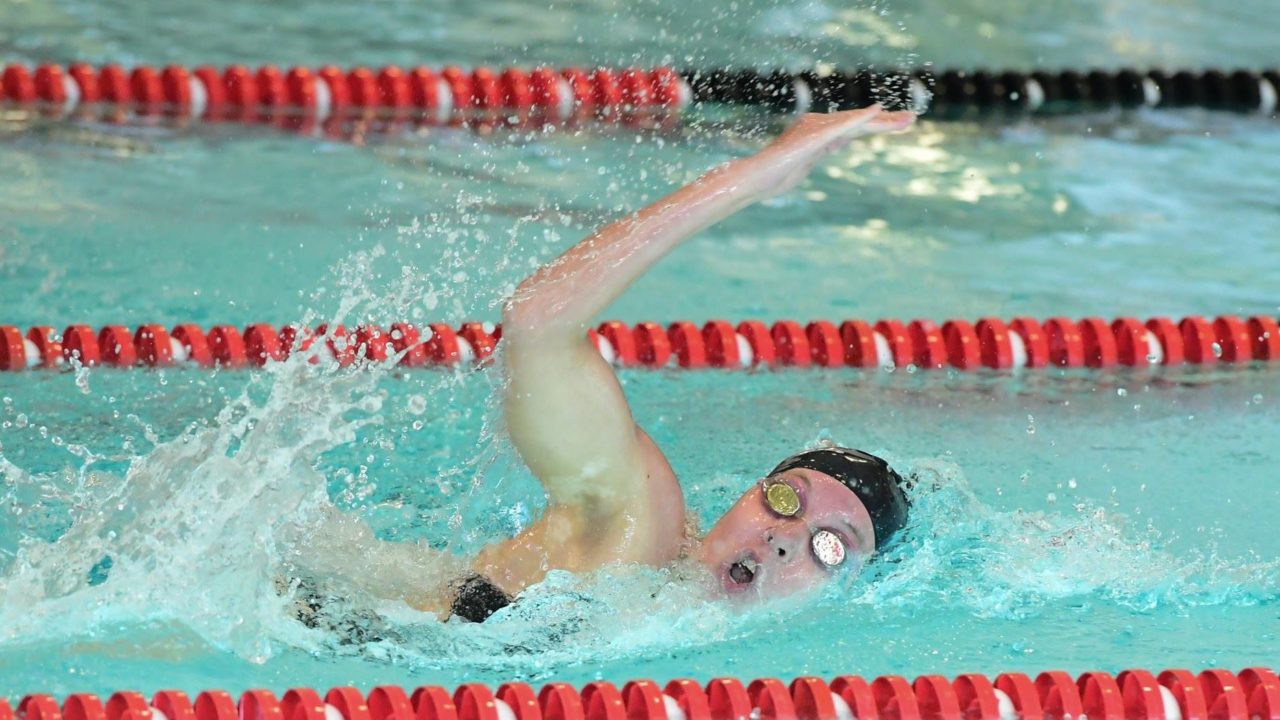 The Davidson women topped George Mason 165.5-95.5 while the Patriot men boast a 130-56 lead over the Wildcats at the Richmond Duals. Current photo via Tim Cowie, DavidsonPhotos

RICHMOND, Va. — Siena Senn, Sarah Helen Shepherd and Shelby Stanley won two events each Friday — and the Wildcat women topped George Mason in the team scores — to highlight the first day of swimming and diving action at the Richmond Duals.

The Davidson women’s team emerged with a 165.50-95.50 win over the Patriots and will now face host Richmond on Saturday beginning at 10 a.m.

“The women were outstanding tonight,” said coach John Young. “It was fun to see them start to explore what they’re capable of.”

In all, the Davidson women won nine events, beginning with the 200 medley relay, as Hope Carpenter, Stanley, Olivia Stanley and Abby Francis swam it in 1:47.64.

Julia Goodhead posted a win in the 100 backstroke (58.07), and Hannah Gould won the 200 breaststroke in 2:25.11. Diver Liz Goei was unopposed and added key points in two events.

The top finish for the Davidson men came from junior diver Daniel Valmassei, who won the 1-meter competition. The reigning Atlantic 10 Performer of the Week continued his strong start to his first Davidson season, totaling 263.10 points to win by 18 points.

The Davidson men are back in action at 10 a.m. Saturday in Richmond and will conclude their two-day meet with George Mason.

RICHMOND, Va. – Facing Atlantic 10 opponents for the first time this season, the George Mason men’s swimming and diving team leads Davidson, 130-56, while the women’s team fell to Davidson, 165.5-95.5, on Friday in the first day of competition at the Richmond Duals.

On the women’s side, Mason won five events against the Wildcats.

The top three finishers in the 200-yard freestyle were separated by just over two seconds, with Mason sophomore Laura Hodge third in the event (1:56.50).

The Patriots took two of the top three spots in the 100-yard backstroke, with sophomore Hannah Milikich second (58.46) and freshman Lauren Ashton third (59.87).

In the final event of the day, Clabeaux, Lewantowicz, Hodge and Ashton won the 400-yard freestyle relay (3:33.20).

On the men’s side, the Patriots won eight events and hold the lead over the Wildcats after day one of the two-day dual.

The combination of seniors Ryan Donnelly and Christopher Stankiewicz, along with junior Dylan Peck and sophomore Will Rastatter took first in the 200-yard medley relay (1:34.22).

The Patriots are back in action on Saturday morning, with the men’s team continuing their dual meet against Davidson, while the women’s team will face Richmond.

Diving will be held at the Robins Center Natatorium and swimming at SwimRVA on Saturday beginning at 9:30 a.m.