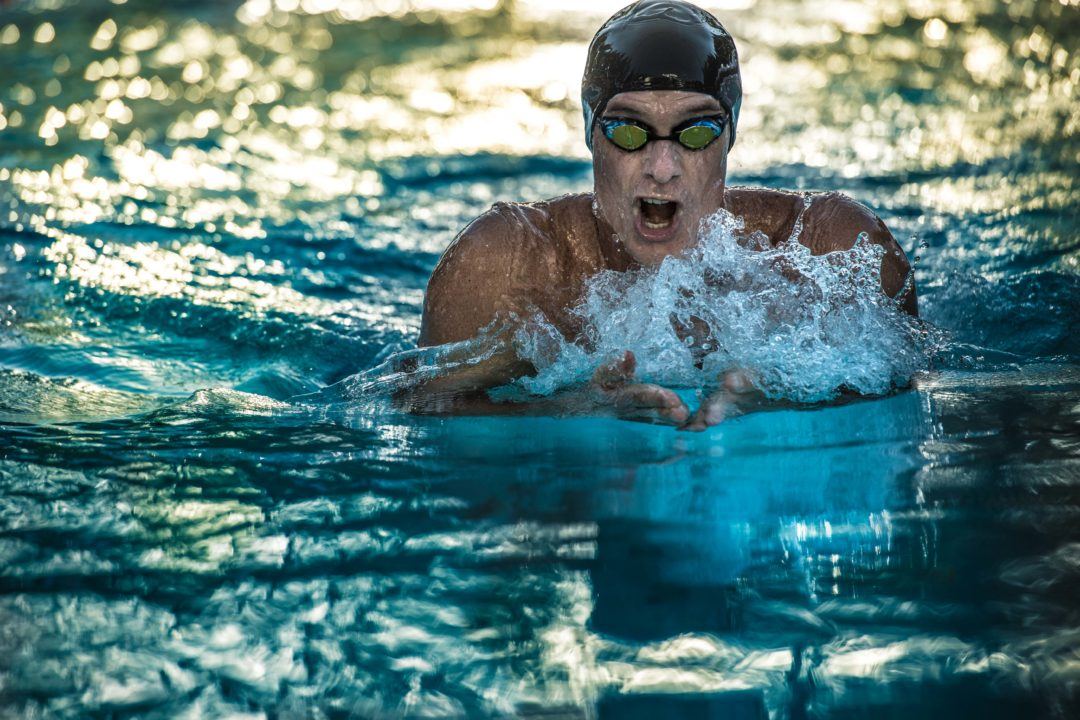 Sims was a part of the 1980 U.S. Olympic Team that never got to compete because of the boycott. Archive photo via Mike Lewis/Ola Vista Photography

Mark Urban contributed to this report.

David Sims of Illinois Masters’ swimming broke the USMS National Record in the 200 yard fly on Sunday at the Illinois Masters Swimming Association (ILMSA) Short Course State Swimming Championships. The meet was held across the border at Munster High School in Munster, Indiana.

Sims was a part of the group of athletes that qualified to represent the United States at the 1980 Olympic Games but didn’t get the chance when the U.S. boycotted the event; he was scheduled to swim the 1500 free. Most of his major youth exploits came as a distance freestyler, including a YMCA National Championship in the 1650 free in 1978, a Junior National championship in the 400 meter free in 1979, and a 1650 free U.S. senior National Title in 1980. He then took 2nd in the 1500 meter free at the 1980 USA National Long Course Championships that served as a replacement for the cancelled Olympic Trials.

How was he scheduled to win the 1500 free at the Olympics?

I think that it was referring to the trails, not the Olympics.

Great swim, but we’ll be looking for sub 2:00 next month at USMS Nationals in Indy!

C’mon, Kirk, don’t egg him on. We don’t need any more records out of reach!

Congratulations, Dave! In your honor, here’s an excerpt from the 1981 YMCA Nat’s meet program: Event #32: Men’s 1650; National Record: Dave Sims, 15:19:24; “This Event Sponsored By: David Sims 1980 Olympian”. All of you, I noticed that the preceding page is an advertisement from Hewlett Packard, selling a small business computer solutions, beginning at $28,100 … I paged through some more, and found the “Goggl’Cap”. Anyone remember those? I tested one of them, and thought I was going in on something big (I was promised that I would be an endorser)!