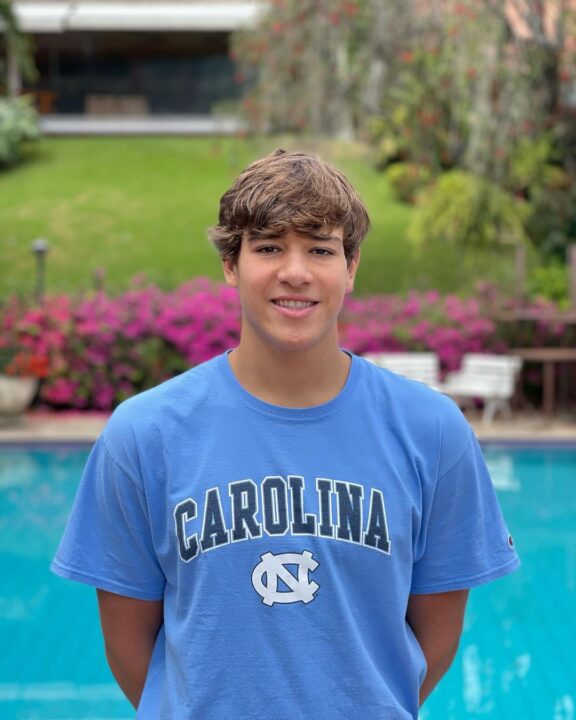 David Quaresma from Wake Forest, North Carolina has announced his decision to remain in-state and swim for the University of North Carolina Tar Heels in the fall of 2023.

“I am extremely excited and grateful to announce my verbal commitment to continue my academic and athletic careers at the University Of North Carolina Chapel Hill!! I’m thankful for all my family, friends, and coaches for helping me get here. #goheels #commitedsw”

Quaresma is currently a senior at Wake Forest High School, only 40 miles away from UNC’s campus in Chapel Hill. At the club level, he competes for the Marlins of Raleigh, a team that notably practices out of N.C. State’s campus, not UNC. Quaresma holds Junior National cuts across 6 different events and holds a US Open cut in the 500 freestyle (4:26.08). At the recent Winter Junior Championships – East, Quaresma swam personal best times in both the 100 freestyle (45.12) and the 200 freestyle (1:37.63). He also made finals in the 200 freestyle, placing 20th overall.

With his speciality events coming in the 200 and 500 freestyle, Quaresma will be a good fit on UNC’s roster. The Tar Heels currently boast a deep group of 200 freestyle swimmers, along with a formidable 500 freestyle group. The team’s 800 freestyle relay currently ranks 14th in the NCAA after midseason invitationals, led by a slew of swimmers under the 1:35 barrier. In addition, there are currently 4 swimmers on the roster who have achieved the NCAA B-cut in the individual 200 freestyle: Patrick Hussey, Tomas Sungalia, Louis Dramm, and Nick Radkov. Of those swimmers, Sungalia is the only senior or graduate senior, meaning Quaresma will overlap at least 1 season with the other top swimmers. In the 500 freestyle, the team currently has 3 swimmers with NCAA B-cuts, including the aforementioned Hussey and Dramm, along with sophomore Aidan Crisci. However, after Crisi the team lacks the same level of depth in that event as it has in the 200.

With his commitment, Quaresma will join Tuck Valliere, Craig Bohlman, Reese Stoner, Keith Williams, Ben Delmar, and Colin Whelehan in UNC’s class of 2027. Notably, every committed recruit, with the exception of Bohlman, is an in-state recruit for the Tar Heels, showcasing head coach Mark Gangloff’s ability to draw from a talented pool of local athletes for his recruiting classes. The same trend was present in Gangloff’s recruits from the high school class of 2022, as more than half of the team’s recruits were from in-state.