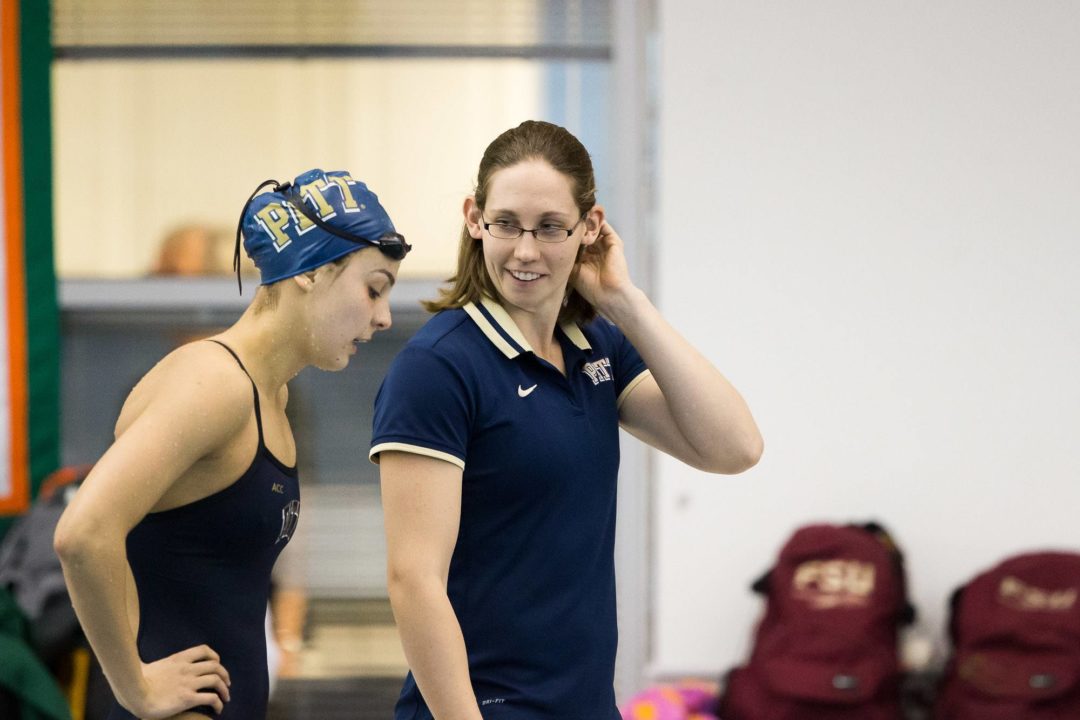 David Dixon was just off his best times in the 100 and 200 fly, while The Mountaineers won 11 of 16 events in the men's meet, but the WVU women fell to Pitt. Archive photo via Tim Binning/TheSwimPictures.com

Meet records already started falling in prelims this morning, so we’re sure to be in for a fast finals session tonight in Greensboro, North Carolina.

The West Virginia men beat Pitt handily in the “Backyard Brawl” on Thursday, January 18th, while the WVU women fell to Pitt by a large margin. The Mountaineer men won 11 of 16 events, and the Panthers women won 14 of 16.

The Mountaineer men won the 200 medley relay in a near season best time of 1:29.94. The WVU season best sits just .44 seconds faster at 1:29.50. WVU also got second in the medley relay, with the ‘B’ relay providing some very close swims to back up the ‘A’ relay. A quick breakdown of the 2 relays can be found below:

The Mountaineer men won 11 events and set three pool records to earn a 187-113 victory in the Backyard Brawl. The WVU women won two events in a 193-107 defeat.

“I am really proud of both teams today, we discussed focusing on creating our own environment and I think both teams did a great job of that today,” WVU coach Vic Riggs said. “Morgan Bullock and Amelie (Currat) continue to compete at a high level with our underclassmen improving meet to meet. For both teams we discussed improving upon our times from last weekend, and as a team we did that by setting three pool records, two for the men and one by the women.

“For the men to come out with a victory today was fantastic. Coming out with a 1-2 finish in the 200 medley relay really set the tone for the rest of the meet. David (Dixon), Merwane (El Merini), Tristen (DiSibio), Luke (Hene), Logan (McHenry) and Michael (Proietto) had key victories today.  (Diving coach Michael Grapner) and our divers did a great job on the boards today and were a key factor in securing the victory for the men. Overall it was a very solid performance for both teams.”

The men’s win over Pitt was their second in three years and eighth all-time. Four of those wins have come in Riggs’ 11 seasons.

For the West Virginia women, sophomore Morgan Bullock posted two individual wins and finished second in one individual event and in a relay to pace the squad.

Competition in the pool began with the 200 medley relay. After the women posted a second-place finish, the men followed with their pool-record time to win the event. Freshman Angelo Russo, DiSibio, Dixon and El Merini touched the wall in 1:29.94, winning by more than two seconds and breaking the WVU Natatorium record by nearly a second.

West Virginia wasted no time recording its third pool record with a win in the next event, the men’s 200 butterfly. Dixon’s 1:45.80 led the way for a victory by nearly five seconds.

The Mountaineer men notched another win in their next event, thanks to DiSibio. He finished the 100 breaststroke in 55.68 to claim his second victory of the meet and first individually.

El Merini followed with another win in the 100 freestyle, his second individual victory and third overall. His time of 45.75 came ahead of Damich, who finished second with a 46.01 to fuel a 1-2 WVU finish.

Later on, Bullock notched her second win of the day in the 100 butterfly. Her 55.67 helped WVU to a 1-2 finish, as senior Amelie Currat followed in second place with a 56.83.

The men also recorded a win in the 100 butterfly, courtesy of Dixon’s second individual victory. He touched the wall in 48.66 to win by nearly two seconds.

The meet concluded with a final victory for the men in the 400 freestyle relay. Damich, freshman Max Gustafson, Neaveill and El Merini won with a 3:03.08, winning a tightly-contested race by 0.62 seconds. For the women, the Mountaineers scored a second-place finish in the event with a time of 3:32.06.

“Tonight’s meet was a big one for the divers,” WVU diving coach Michael Grapner said. “I’m thrilled with the outcome for both the men and women. Logan McHenry is just returning for both 1- and 3-meter and stepped up and capitalized on his 1-meter performance. Mike Proietto was very consistent on his lists, and I was really happy to see him apply the corrections we have been working on this week. For Mike and Logan to both walk away with victories tonight is a great sweep for the WVU men.

“The women had their work cut out for them tonight. Pitt brought four competitive girls. We started out a little tense, but as the meet progressed, all the ladies started to settle in and rise to the competition. I’m really happy with their hard work and focus, especially as we head into next weekend with Iowa State and Villanova coming to town.”

For the women on springboard, junior Madelyn Woods‘ 252.37 led WVU with a second-place finish on 1-meter, while junior Julia Calcut placed second on 3-meter with a 281.55.

Up next, the Mountaineers host Iowa State and Villanova on Saturday, Jan. 27. The Senior Day meet commences at 11 a.m. ET at the WVU Natatorium.

MORGANTOWN, W.Va. — The Pitt women’s swimming & diving team produced a dominant display to triumph in the Backyard Brawl, 193-107, against West Virginia on Thursday evening at the WVU Natatorium.Competing in a dual meet for the first time in more than two months, the Panthers (9-2) knocked off the previously unbeaten Mountaineers (3-1) in convincing fashion thanks to several standout swimmers and a historic diving performance by senior Meme Sharp.Sharp won both women’s diving events, scoring 319.87 points on 1-meter and 306.60 points on 3-meter. Her 1-meter points total set a WVU Natatorium all-time record, besting the previous pool record at West Virginia, which had been held by Virginia Tech’s Ashlynn Peters since 2015.That was just the start of Pitt’s history-making success at the WVU Natatorium on Thursday evening in Morgantown. Sophomore Valerie Daigneault led the Panthers in women’s swimming by taking home three individual event wins, claiming top spot in the 100 back (55.71), 200 back (1:58.28) and 200 IM (2:03.04) — and her 200 back and 200 IM times were also the best in the history of the home of West Virginia swimming & diving.Joining Sharp and Daigneault in winning multiple events for the Panthers on the women’s side were junior Rachel Brown triumphed in the 50 free (23.70), 100 free (51.93) and 200 free (1:51.50); senior Lina Rathsack took the 100 breast (1:03.56) and 200 breast (2:18.25); and senior Amanda Richey cruised in the 500 free (4:56.48) and the 1,000 free (10:06.00)Also on Thursday night, the Pitt men (5-3) fell to undefeated West Virginia (4-0) by a score of 187-113.Leading the Panthers on the men’s side was sophomore Samy Helmbacher. Helmbacher won three 200-yard events himself — the 200 free (1:39.38), 200 breast (2:03.02) and 200 IM (1:48.40) — and his mark in the 200 IM was the Panthers’ fourth WVU Natatorium pool record of the meet.Junior Aaron Sett also gave Pitt a clean sweep in all of the freestyle distance events by claiming the titles in the 500 free (4:32.67) and 1,000 free (9:27.09).The Panthers won’t have to wait long to compete in a dual meet again. Pitt host Division III power Denison on Friday at Trees Pool. The meet begins with diving at 4 p.m. before swimming starts at approximately 5 p.m. Admission is FREE to all fans.