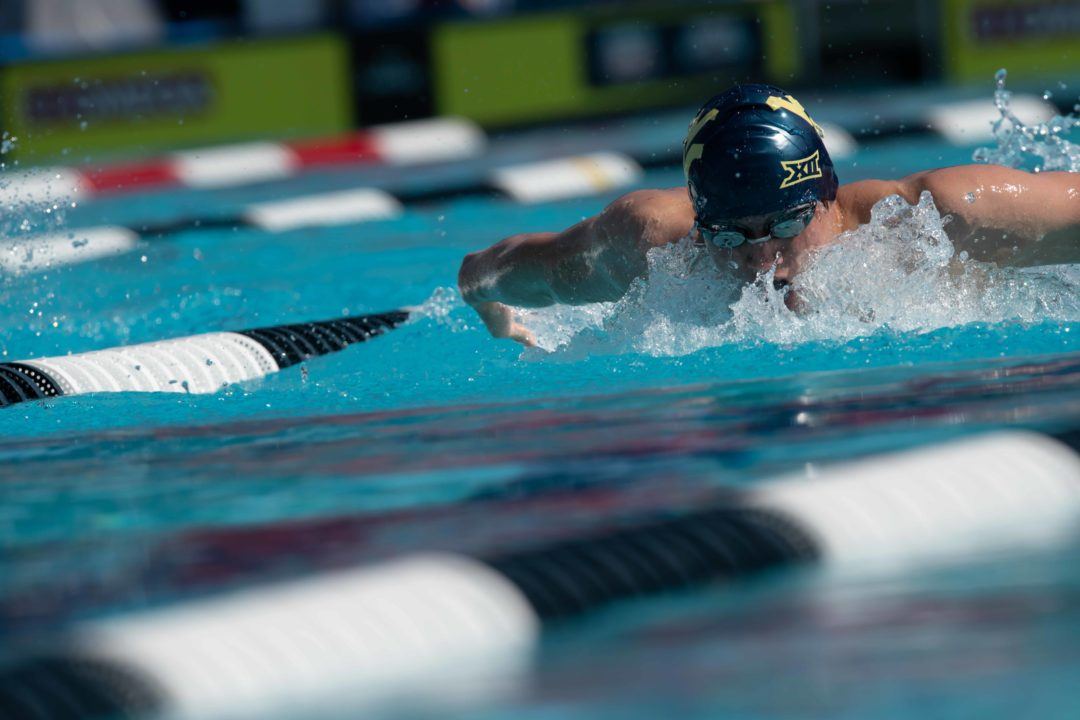 Mountaineer David Dixon broke the SMU pool record in the 200 fly, where Dixon clocked a 1:42.65 to win the race by nearly 9 seconds. Stock photo via Mike Lewis/Ola Vista Photography

West Virginia went to Dallas over the weekend to face SMU, coming away with a 182-117 victory. Mountaineer David Dixon broke the SMU pool record in the 200 fly, where Dixon clocked a 1:42.65 to win the race by nearly 9 seconds. That time comes in just a second off Dixon’s season best of 1:41.59. Dixon also won the 400 IM with a 3:56.18, marking another decisive victory, this time by over 7 seconds. Dixon’s 400 IM was a season best.

With Dixon absent in the 100 fly, teammate Angelo Russo claimed victory, touching in 49.95. Fellow Mountaineer Jack Frazier touched right behind Russo, clocking a 50.06. Russo also won the 100 back earlier in the meet, swimming a 49.68.

West Virginia and SMU split the breaststroke events. Fausto Huerta won the 100 breast for WVU, swimming a 56.33. Caleb Rhodenbaugh of SMU was 2nd in that race, touching in 56.80. Rhodenbaugh then won the 200 breast, clocking a 2:04.22.

In the pool, the Mustangs were led by event winners Petar Bozhilov, Caleb Rhodenbaugh and Stephen Cheng, while Peter Smithson and Parker Hardigree split diving wins.

The first victory of the night came from Bozhilov in the 1,000-yard freestyle, as the sophomore continues to lead the Mustangs in the event. Bozhilov covered the distance in 9:37.78 for the win. He also placed second in the 500-yard freestyle in a time of 4:37.35.

Rhodenbaugh won the 200-yard breaststroke on Friday night, leading a pair of Mustangs in the top three. The junior paced the field in 2:04.22 ahead of teammate Colin Feehery, who clocked in at 2:06.01 for runner-up honors.

Hardigree led the field on 1 meter, finishing with a six-round 343.80, just ahead of teammate Smithson at 339.08 for second. Smithson’s win on 3 meter came from a 340.20, a score over 17 points better than his closest competition. Hardigree was third in the event, registering 319.20 points.

The Mustangs are back in action Saturday when they host UIW at 1 p.m. at The Nat. Follow live results and video at SMUMustangs.com.

MORGANTOWN, W.Va. – After collecting 11 total victories on the night, the West Virginia University men’s swimming and diving team (2-1) defeated SMU, 182-117, on Friday night at the Barr-McMillion Natatorium in Dallas, Texas.

Freshman Hunter Armstrong paced the Mountaineers with four total wins, including two individual victories in the 100 and 200 freestyle. Junior David Dixon also captured multiple solo victories against the Mustangs, including a pool record in the 200 butterfly with a time of 1:42.65.

“It was a very strong day for the men,” Mountaineer coach Vic Riggs said. “We discussed racing well, having fun, making every point count and being proud to be Mountaineers before the meet. The team did all of that and more. We took control of the meet in the first session with a win in every event. It was a team win today, and everyone did a great job.”

The meet opened with the 200 medley relay, as WVU began the meet with a win. The team of junior Angelo Russo, sophomore Fausto Huerta, Dixon and Armstrong combined to finish in 1:29.41 for first place. Seniors Austin Hartke, Jack Portmann, Sam Neaveill and junior Ryen Van Wyk followed in second with a time of 1:32.10.

In the diving well, sophomore PJ Lenz paced the Mountaineer divers with a third-place, 282.90 finish on 1-meter springboard and second-place finish on 3-meter with an NCAA Zones-qualifying score of 340.20. Redshirt senior Austin Smith followed in fourth place (276.90) on 1-meter and sophomore Nick Cover was fourth on 3-meter (318.75).

“Tonight was a great opportunity to compete against a good diving team,” diving coach Michael Grapner said. “Our performances on 3-meter made for a good contest on the boards. PJ was consistent and applied his corrections throughout the night.”

Back in the competition pool, the Mountaineers finished in dominating fashion in the 100 backstroke, securing the top four spots. Russo was first (49.68), Hartke grabbed second (50.50), senior Trayton Saladin finished third (50.93) and sophomore Josh Harlan rounded out the top four with a time of 51.35.

Huerta secured another victory for the Mountaineers in the 100 breaststroke, finishing in 56.33. He was followed by junior Ben Brooks in third (57.33).

West Virginia’s sprinters showed off in the 50 free, where Van Wyk collected a victory for the Mountaineers in 20.80 and Neaveill took third (21.21). Armstrong followed with his third win of the night in the 100 free in 45.32, while Van Wyk grabbed third place in 46.40.

Dixon represented the Mountaineers in the 400 individual medley, securing first with a time of 3:56.18. In the final event of the night, the 400 free relay, the team of Armstrong, Van Wyk, junior Christopher O’Shea and Neaveill led the pack with a time of 3:03.66 to secure WVU’s final win of the night.

The Mountaineer men return to action on Saturday, Jan. 18, as they meet up with the women’s team in Fort Worth, Texas, for a Big 12 dual meet at TCU. Action at the University Recreation Center is set to begin at 12 p.m. ET.

I heard this wild man wears a jammer