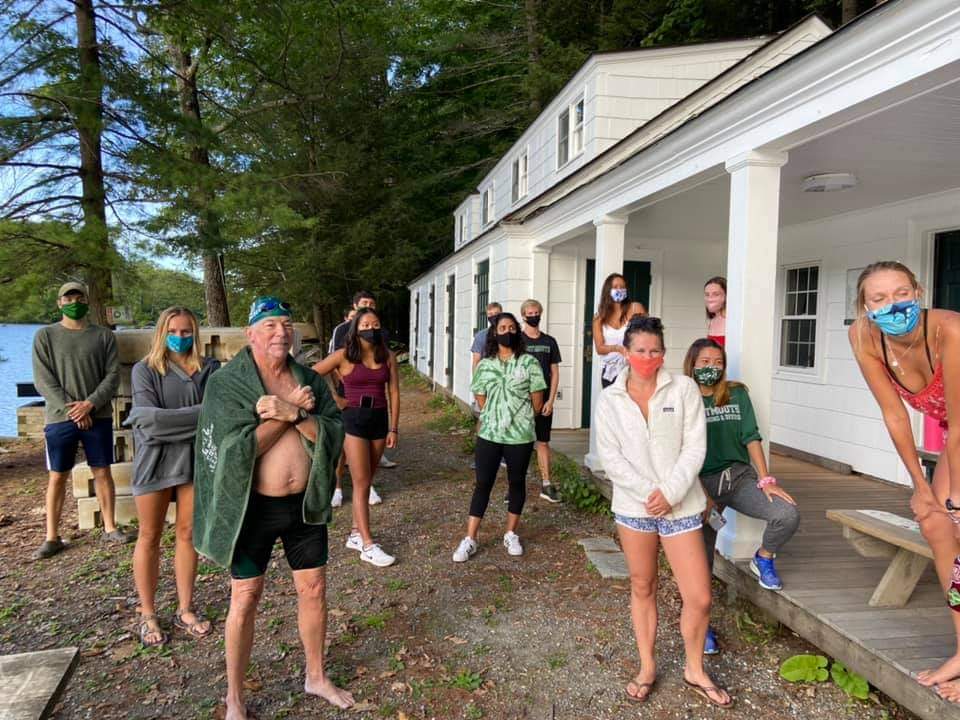 The Big Green community gathered together for Jim Bayles' (68) open water swim which was dedicated to raising pledges for the recently cut swim and dive team. Current photo via Trina Bayles

Actions spoke louder than words in Connecticut on Saturday when Jim Bayles, class of ‘74 Dartmouth Alumni and former Dartmouth swimmer, completed a 15.6 mile swim in the Connecticut River to raise pledges for the reinstatement of the Dartmouth swim and dive team. The team was cut in July alongside men’s and women’s golf and men’s lightweight rowing.

Bayles swam nonstop for 7 hours and 45 minutes from Lyme to Hanover, with guidance from a small crew onboard a boat. The boat was piloted by Jim Wilson, the Dartmouth men’s swim and dive head coach for 23 seasons and the women’s program head coach for 10 seasons before he retired in 2016. Wilson was joined by the former women’s swim and dive coach and the current Senior Associate Athletic Director at Dartmouth for PE and Recreation, Joann Brislin. She monitored Jim’s health and safety in the role of the official observer. Jim’s wife, Trina Bayles, served as the support crew.

Bayles was handed food, gatorade, and water over the side of the boat every 45 minutes. According to the United States Geological Survey, the Connecticut River was about 69 degrees Fahrenheit that day, and Bayles forewent a wetsuit anyway.

Ron Keenhold, the men’s head swim coach at Dartmouth during Bayles’ collegiate career, was the first to greet him at the finish line. Bayles was then congratulated by more than a dozen current Dartmouth student-athletes, alumni, friends, and supporters .

Jim Bayles after completing the swim – courtesy of Marilyn Deppe

“I want Dartmouth to reinstate the teams,” Jim Bayles said in a statement. “Varsity athletics prepare students to be leaders in the world. Cutting these teams was a mistake, and it is time for President Hanlon to acknowledge there is a better way forward than curtailing the role of athletes on campus.”

Onboard the sport boat on Saturday Trina Bayles spoke with SwimSwam over the phone. “The program brought so much to him throughout his life in so many ways,” she said.

Since graduating from Dartmouth in 1973, Jim has continued to train and compete in Masters open water swims. In 2005 he became one of five known swimmers to ever complete the 13 mile swim from Point Judith, RI, to Block Island, RI. It took the then 53 year-old 5 hours to complete in the 64 degree water.

For the past 23 years, Bayles has participated in at least one marathon open water swim per year, many of which he dedicated to charities. His Rhode Island swim in 2005 was dedicated to the Epilepsy Foundation. Most recently, in 2009, Bayles was inducted into the Dartmouth Athletics Hall of Fame.

Amidst the coronavirus pandemic, funds were listed as one reason for Dartmouth’s decision to cut five varsity sports teams (men’s and women’s swimming and diving, men’s and women’s golf, and men’s lightweight rowing.) This decision was projected to save the college over $2 million.

Despite this, Athletic Director Harry Sheehy and Dartmouth President Phil Hanlon have refused to say how much pledge money would be sufficient to reinstate the swim and dive team. However, in a July interview with the college newspaper, The Dartmouth, about the decision to cut all seven varsity sports programs, Sheehy was asked:

Could you discuss further why, if alumni come in with donations to provide significant funding to these teams, it would not be possible to keep them?

HS: “First of all, I don’t think the alums have an understanding of what it would actually take. For example, in ’02-’03, when we eliminated swimming, the alumni stepped up to save the program, but they didn’t endow the program. So some of the articles have been wrong. They’ll say, “Well, the alumni stepped up to endow the team back in ’03.” Well, they didn’t. What they gave was $2 million of current use money. That means the budget every year came out of that, and that was a spend-down account. It wasn’t spinning off any income because $2 million spins off about $80,000 a year. That doesn’t pay for anything. That number has to be five times bigger to be an endowment.”

This suggests that it is technically possible to raise such funds, but he doubts the ability of the Dartmouth swim and dive team and its alumni to do so.

Additionally, in the same interview he addressed Dartmouth’s second reason for cutting five athletic programs: its requirement to reduce admission slots by 10%. He said, “You can argue with us about what teams. That would be a debate. I don’t think you can debate that that’s what we needed to do at this point in our history in order to maintain a program.”

These statements have not dimmed the spirit of Dartmouth swim and dive athletes, similar to the athletes of the many swim and dive teams that have been cut this year. They have continued to fight the decision by filing a grievance with the college saying that the five cut programs represented “almost 50% of Asian athletes” at the school, placing 853 pairs of goggles on the Dartmouth Green to represent the 853 Hanover children whom they gave swim lessons in the past five years, and posting statistics of the team’s academic success on social media.

800+ children! That’s how many kids our team has taught to swim over the last 5 years. Today, we filled the college Green, the main lawn in front of the library, with goggles representing each child whose life we have touched with this critical life skill. It’s symbolic of the broad reach our team has on our campus and community. Because we aren’t just swimmers, and we aren’t just divers. And we have the power and talent to make valuable contributions to the college community and beyond. We implore the administration to reverse its decision to cut our program and allow us to keep doing – and sharing – the sports we love.

Dartmouth Swimming and Diving excels in the classroom, and we have the numbers to prove it. President Hanlon stated in his announcement that “athletic recruitment at Dartmouth has begun to impact our ability to achieve the right balance between applicants who are accomplished in athletics and applicants who excel in other pursuits”. Dartmouth swimmers and divers excel in many other pursuits, and academics is certainly one of them.

Trina Bayles spoke about the collective support Dartmouth swim and dive has received from its alumni, some of whom were current athletes the last time the team was cut in 2002, when they successfully raised $2 million to reinstate the team. She said, “We’re doing everything we can…anything we can do to contribute to reinstate the program for all future generations.”

The exact amount of pledges that Jim Bayles’ swim raised has not been reported, but as of today Dartmouth swim and dive’s pledge total has reached over $1.42 million. Their petition to get reinstated has received over 32,000 signatures.

Incredible swim by Jim Bayles for a good cause, 8 hours of swimming in a chilly Connecticut River is no small feat! Hopefully this will help some higher ups at Dartmouth will recognize the drive and fortitude exemplified by Dartmouth Swimming and Diving.