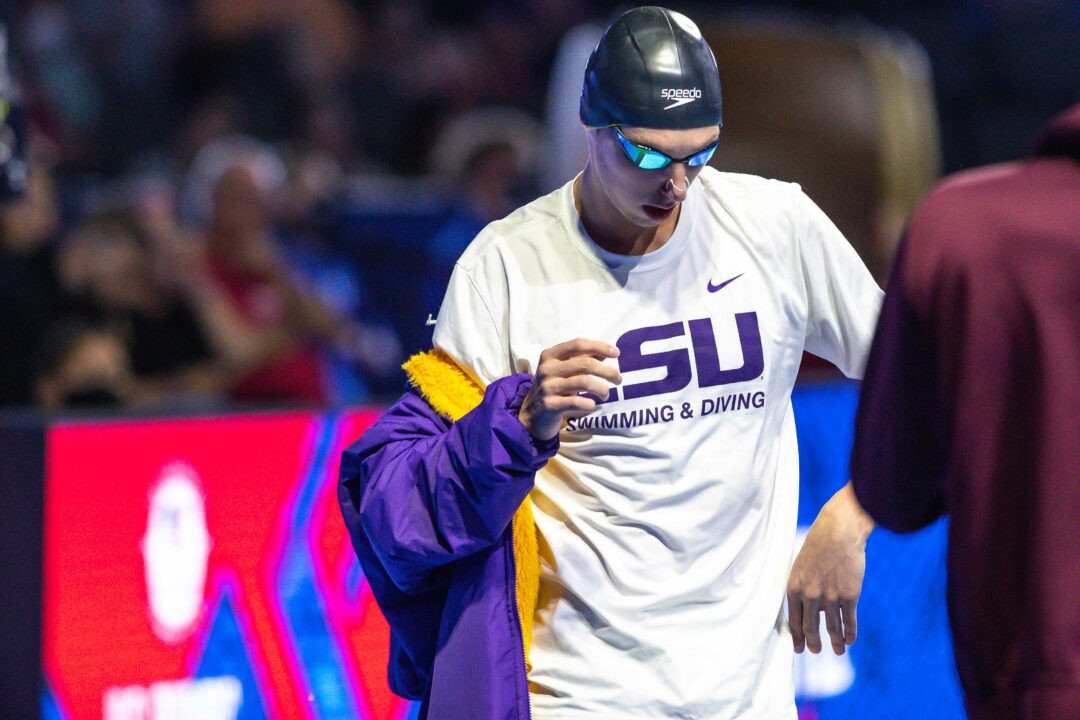 LSU Olympian Brooks Curry broke his own pool record in the 50 free, but Texas A&M won both the men's and women's meet in Baton Rouge. Current photo via Jack Spitser/Spitser Photography

Texas A&M traveled east to take on LSU on Saturday and the Aggies emerged victorious in both the men’s and women’s meet.

The men’s meet came down to the wire, with Texas A&M coming away with an 8 point victory on the road to spoil the Tigers’ senior day.

LSU American Olympian Brooks Curry led the way for the Tigers, sweeping the sprint freestyle races. In the 50 free, Curry broke his own LSU pool record in 19.42 to take the win. He later returned to win the 100 free as well, touching first in 43.76. Curry, who won a gold medal in Tokyo as a prelim-only member of the 4×100 free relay, holds the 3rd fastest time in the NCAA in the 50 free with a 19.02, while his 42.10 100 free stands 7th in the nation this season.

The Aggie women were dominant during their trip to the bayou, heading back to College Station with a 70 point victory while exhibitioning the last two events.

Also impressing for the Aggies was freshman Sarah Holt, who swept the butterfly races on Saturday. The Shreveport, Louisiana native first won the 200 fly in her return to her home state, touching first in 1:58.95. She later returned to win the 100 fly as well, touching in 54.27 to take the win. Her 200 fly was a new lifetime best, while her season and lifetime best in the 100 fly checks in at 53.49 from November’s Art Adamson Invite.

The Tigers were led by their stout diving program, including mid-season addition Chiara Pellacani’s LSU debut. Pellacani, who competed at this past summer’s Olympic Games for her native Italy, swept both the 1 and 3 meter events. In the one meter, Pellacani posted a score of 315.45 to take the win and later returned to win the 3 meter as well in 350.70. Pellacani’s arrival should provide a huge boost for the Tiger women in the championship season, as the Italian is a 7-time medalist at the European Championships in various events.

LSU will next suit up at the SEC Championships in Knoxville, while Texas A&M will host SMU on Friday for their final dual meet of the season.