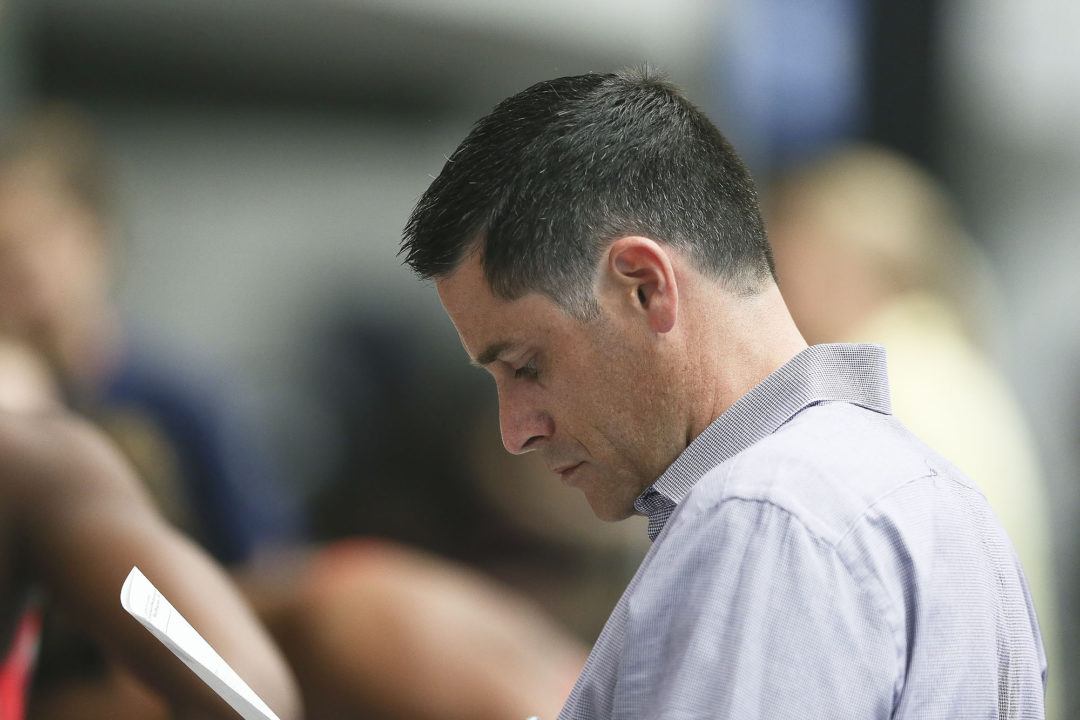 Head coach Greg Meehan led the United States women to their most successful World Championships in history, with 20 total medals, 9 of them gold. Archive photo via Tim Binning/TheSwimPictures.com

Head coach Greg Meehan led the United States women to their most successful World Championships in history, with 20 total medals, 9 of them gold.

And unlike the overall medal tally, that doesn’t include mixed relays, which means the number of total medal opportunities was identical in 2017 to every season back to 2001.

Those 20 total medals are the most for any American women’s team in World Championships history. With 20 medal events for women, the U.S. averaged a medal per event. In fact, there were only four events in which an American woman didn’t medal: the 50 back, 50 fly, 200 fly and 400 IM.

Comparing that medal total to the event lineups in previous years (Worlds featured 20 women’s events from 2001 to the present, 16 women’s events from 1986-1998 and 15 from 1973-1982), this is only the second time the Americans have averaged one medal per event. The 1978 team won 16 medals over 15 events – that was a pretty stellar team that included Tracy Caulkins, Sippy Woodhead, Joan Pennington and Linda Jezek.

This year’s American team nabbed 9 golds, tied for the most in American history. Other years to win 9 medals were 2013 (thanks to the dynamic combination of young Katie Ledecky and peak Missy Franklin), 2007 (Katie Hoff, Kate Ziegler, Natalie Coughlin & co.) and that 1978 team.

And before the arguments start about exactly how much a head coach is directly responsible for a team of swimmers from different programs, Meehan’s own swimmers were the biggest powerhouses of the bunch. Katie Ledecky and Simone Manuel led all women with 5 gold medals and 6 total medals apiece, and Lia Neal was a valuable relay piece who won two golds herself. Though Ledecky probably didn’t have the meet she’d hoped for, she still finished tied with Sarah Sjostrom for the most individual medals of the meet on the women’s side, and Manuel was better than she’s ever been.

For all of that, Meehan is July’s Competitor Coach of the Month.

The women’s COACH of the year has to be Arthur Albiero.

I think it all depends on the criteria. If last year they gave it Gemmell, just based on Katie’s performance, then the award should go to Troy or Looze. Katie was a one person wrecking crew, as was Caeleb this year. And King set two WR’s. Or their assistants if they were doing the actual coaching?

Strange pick considering he really only had success with one swimmer this summer (Simone). Lia made the team for one swim and ledecky for the first time in years was underwhelming (still insanely fast but not what anyone was expecting…or maybe exactly what everyone was expecting based on a blah yards season).

I’d go with Looze, Baurele, or Caeleb’s coach over Greg.

what does that all mean ?

A double question mark for Katie Ledecky? What does that mean? Katie had just won five golds and one silver and yet many of you are not satisfied with her performance.!!! You should be grateful and proud that Katie is a member of the USA Team. Other countries would have been very proud and more!!!

Short memory regarding Ledecky’s performance. She broke American records 9 times across multiple events and NCAA records 12 times, won 5 NCAA titles and was named the top female collegiate athlete in the nation in her freshman season. At Worlds, she won more gold medals than any other country except U.S., swam the 2nd fastest 400 Free ever, won fhe 1500 Free by 19 seconds with the fourth fastest time ever, and crushed the competition in the 4×200 relay with a time 1.5 secs faster than anyone else in the world. She six-peated in the 800 Free. Anyone expecting her to take down her own WRs in first year of quad is misguided.

OBSERVER….no coach on your list won an NCAA Championship this past year. Greg Meehan is all by himself. Three women from Stanford brought home 14 medals….more than any other school.

Congrats to Greg Meehan. Whatever he is doing right has led to a stellar year for him and his athletes and Team USA. Definitely winning the west coast college recruiting war.

i feel the same here – that Coach did a great job …..period !

Greg and Simone Manuel have it going in the 100 freestyle. She won 2 big races where she was not the favorite.

I totally agree. I’d love to hear how he and Manuel worked on the psychological and strategy side of 100 freestyle.

She seems to be able to control her speed very well. She’s not the fastest going out, but she maintains her speed throughout the race. And then passes everyone before the finish.

Kinda the strategy Adrian is working on which paid off for him. Now if only Simone can work on her front end while maintaining her back half. She would be legendary

Her training on the 200 freestyle helps on the physical side. But she also has honed in on her killer instincts and being able to hold back the first 50 meters rather than burn her jets right from the get go. These are psychological aspects of sprinting that aren’t easily taught.

Steve Bultman can teach it. #BultmanMagic