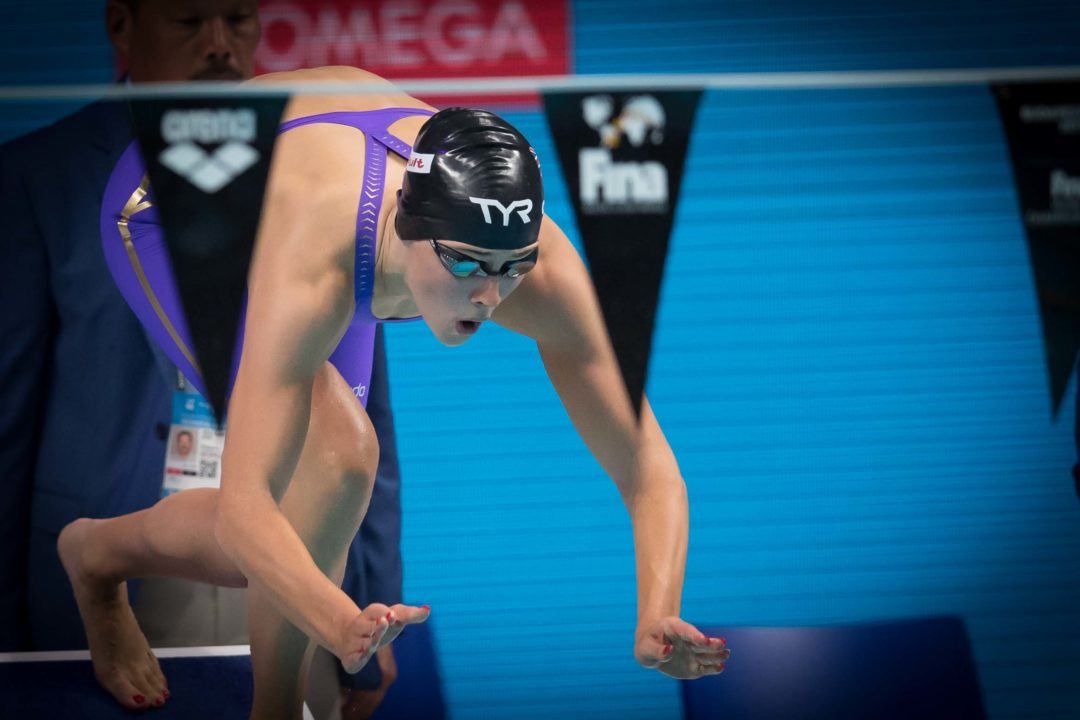 Siobhan Marie O'Connor of England is the odds-on favorite to win the 200 IM at the upcoming Commonwealth Games. Archive photo via Mike Lewis/Ola Vista Photography

While the Australian and Canadian women will likely dominate the medal stand in most of the strokes, especially freestyle and backstroke, the individual medley looks to be where the Brits will shine. Both defending champions from last year return in Siobhan-Marie O’Connor of England and Hannah Miley of Scotland, with several others likely to contend for medals.

The 22-year-old O’Connor comes in as the big favorite in the 200, being the #3 all-time performer in 2:06.88, done when she won the Olympic silver medal in 2016. Though she was a bit off form last year, placing 7th at the World Championships, she was still the only swimmer in the field sub-2:10 over the course of 2017.

The veteran Miley, who has moved up two spots in this event in the last three Commonwealth Games (7th to 5th to 3rd), was just off making an appearance in the final at last year’s World Championships placing 9th. Though she has yet to top her 2009 best of 2:09.46, she remains elite and brings a ton of experience. Joining her and O’Connor in the mix for the British women are England’s Abbie Wood and Aimee Willmott, who both were 2:12 last year.

The Canadians come in with a solid trio of Erika Seltenreich-Hodgson, Sarah Darcel, and Kayla Sanchez. Seltenreich-Hodgson, a semi-finalist in both Rio and Budapest, was the 2nd fastest of anyone in the field last year in 2:10.97, and is coming off a 5th straight Canadian University title in the event. She’ll battle with Miley for silver, while Darcel and Sanchez will be also be in the hunt having gone bests of 2:12.3 and 2:12.6 in 2017.

The Australian contingent of Blair Evans, Taylor McKeown and Meg Bailey will have their work cut out for them if they want to medal, having all gone between 2:12.8 and 2:13.5 at their Trials. If Evans (2:11.1) and McKeown (2:12.1) can get down to their 2016 bests then they’ll be right there. Bailey, who is coming off her senior year with Ohio State, will be more of a factor in the 400 IM.

The two-time defending champion Miley is the big favorite to three-peat in the 400, swimming the top times in the field in both 2017 (4:34.12) and 2018 (4:38.91). Despite her impressive pedigree, she is coming off a disappointing 8th place finish at the World Championships, her worst at either an Olympics or Worlds since debuting in Beijing in 2008, and will no doubt be coming in with some extra motivation.

England’s Willmott hasn’t gotten under the 4:33.01 that won her silver behind Miley four years ago, but has seen some international success with appearances in the final both in Kazan and Rio. Like Miley, she’ll be motivated to come in and perform after being forced government withdraw from last summer’s World Championships due to injury.

Behind those two, the top billed swimmers in this event are Canadian Mary-Sophie Harvey and Australian Blair Evans. Harvey, just 18, swam sub-4:40 five times in 2017, with her best showing coming at the Sette Colli Trophy in June where she went 4:36.48. A month later she failed to follow up, adding ten seconds and missing the World Championship final. She’s gotten some international experience recently competing for the Energy Standard team, and will challenge for a medal here. Evans, owning a best of 4:35.26 from 2016, has rebounded after a poor 2017, winning the Aussie Trials in 4:38.97. If she has a little more time in her she’ll be a medal threat as well.

The other Australians and Canadians all have a shot to be a factor as well. Kaylee McKeown was right with Evans at Trials, putting up a best of 4:39.14. Erika Seltenreich-Hodgson was 4th in this event four years ago, but has yet to hit the 4:36.88 that got her there. She’s made great strides in the 200 since then, so that may be her primary focus now. Both Meg Bailey and Sarah Darcel will make the tough transition from NCAAs to a LC Championship meet, both earning All-American status in this event last month. Though the Australian finished one spot ahead of the Canadian in Columbus, Darcel has historically been better long course with a best of 4:39.29.

England’s Abbie Wood and Rosie Rudin are the two others to keep an eye out for, having gone personal bests of 4:37.25 and 4:38.74 at the 2017 British Championships. They both got a taste of major international experience last summer, with Wood placing 20th in the 400 IM and Rudin 21st in the 200 back in Budapest.

Isn’t attending; Fortunate for SMOC who hasnt looked her best yet this year and would have been vulnerable to Pickrem on her current times.

She’s not on Canada’s roster for the Commonwealth Games. This year would be a hard meet for any current collegian to attend – besides coming just off NCAAs, the Canadians have been in Australia for a week already and have another 10+ days there. That’s a lot of school to miss.

Sarah Darcel is competing – isn’t she a student at Cal?

Sarah Darcel is in the same situation at Cal. Just came of NCAAs, but she is choosing to compete at the Commonwealth Games. I guess its just a personal decision in terms of missing school.