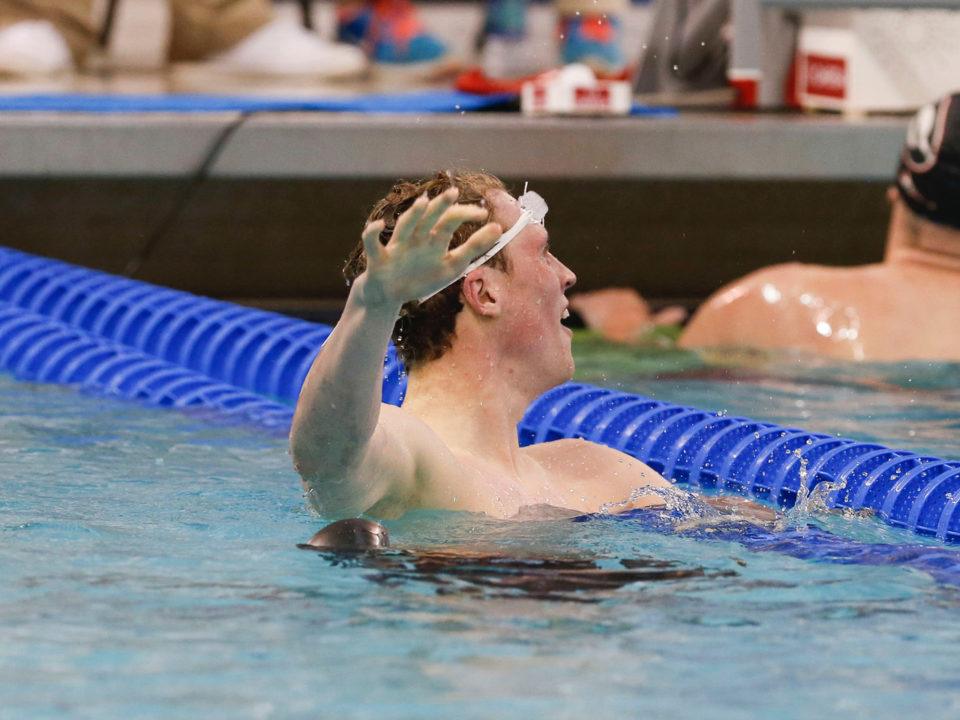 SWIMMER OF THE YEAR: Abrahm DeVine, Jr., Stanford (Seattle, Wash.)
DeVine is the 2018 Pac-12 Swimmer of the Year after helping Stanford finish second at the Pac-12 Swimming Championships and seventh at the NCAA Championships. The two-time Pac-12 Swimmer of the Week won Conference titles in both the 200-yard individual medley and 200 backstroke before going on to set a pool record (3:35.29) in winning the 400-yard IM title at the NCAA Championships. DeVine also placed fourth in the 200 IM at the national meet to earn First Team All-America honors in the event for the first time, adding to a haul of three consecutive years of All-America accolades in both the 200 and 400 IMs. DeVine also competed for the Cardinal’s relays which finished second in the 400 freestyle relay and third in the 800 free relay in the Conference championships as those two relay teams went on to finish 10th and eighth, respectively, at the NCAAs.

SWIMMING FRESHMAN/NEWCOMER OF THE YEAR: Robert Glinta, Fr., USC (Baia Mare, Romania)
Robert Glinta was named 2018 Pac-12 Freshman of the Year for his individual and relay efforts that contributed to USC’s successful season. At the Pac-12 Championships, Glinta took the podium twice as an individual with a runner-up finish in the 200 back (1:40.57) and tie for first place in the 100 back in the first-ever three-way tie at the Conference title meet. Glinta also swam the lead leg on USC’s 200 medley relay that finished third at the league championships. The four Trojans went on to become NCAA champions in the 200 medley relay, posting a new pool record (1:21.82). The freshman came into USC with plenty of experience as he competed as a national team member for Romania at the 2016 Olympics where he finished eighth in the 100-meter back (53.50) and 18th in the 200-meter back (1:57.91).

SWIMMING COACH OF THE YEAR: David Durden, California
Durden has been named Pac-12 Men’s Swimming Coach of the Year for the seventh time in the last eight years after he led the Golden Bears to a Pac-12 Championship and runner-up finish at the NCAA Championships. In the collegiate ranks under Durden’s tenure, the Golden Bears have finished first or second at the NCAA championship in each of the last nine seasons, including NCAA team crowns in 2011, 2012 and 2014. He has produced three Pac-12 Newcomers of the Year – Josh Prenot (2013), Ryan Murphy (2014) and Andrew Seliskar (2016). Durden has been named NCAA Coach of the Year four times (2010, 2011, 2012, 2014) since joining California’s coaching staff in 2007. Other highlights include being named assistant coach for the U.S. Olympic Team and coaching six Cal swimmers to 11 medals in the 2016 Rio Olympic Games.

DIVER OF THE YEAR: Dashiel Enos, Sr., USC (Studio City, Calif.)
Dashiel Enos is named Pac-12 Diver of the Year for the second consecutive season. Enos reached the podium in a pair of Pac-12 Championships events as the senior placed second in both the 3-meter (420.25) and platform (397.75). Enos’ large point total contributed to the Trojans’ third-place finish at the Pac-12 Championships. The two-time defending Pac-12 3-meter champion earned NCAA All-America honors for the second consecutive year with an eighth-place finish on platform (373.20) and 15th on the 3-meter (376.00) as the only Pac-12 Diver to place in both final events.

DIVING FRESHMAN OF THE YEAR: Jonathan Robinson, Fr., California (Irvine, Calif.)
Jonathan Robinson has been named Pac-12 Freshman of the Year for his breakout season in Berkeley. Robinson was one of two California divers to compete at the NCAA Championships after he secured the final qualifying spot on the platform at the NCAA Zone E Championships. At the NCAA Championships, Robinson was one of eight freshmen to compete in the platform preliminary round that was composed of 43 divers.

DIVING COACH OF THE YEAR: Hongping Li, USC
Li three-peats as Pac-12 Diving Coach of the Year, collecting his fourth Conference men’s award of his career (2009, 2016-18). He coached USC to four top-3 finishes at the 2018 Pac-12 Diving Championships, led by Henry Fusaro’s 3-meter championship and 1-meter runner-up finish, and Pac-12 Diver of the Year Dashiell Enos’ second-place efforts in the 3-meter and platform. Li has helped junior Enos win back-to-back Pac-12 Men’s Diver of the Year awards and become a two-time All-American and three-time NCAA scorer. In his 19th season at USC, he has established himself as one of the most successful NCAA coaches and is a two-time NCAA Coach of the Year (2002, 2006).