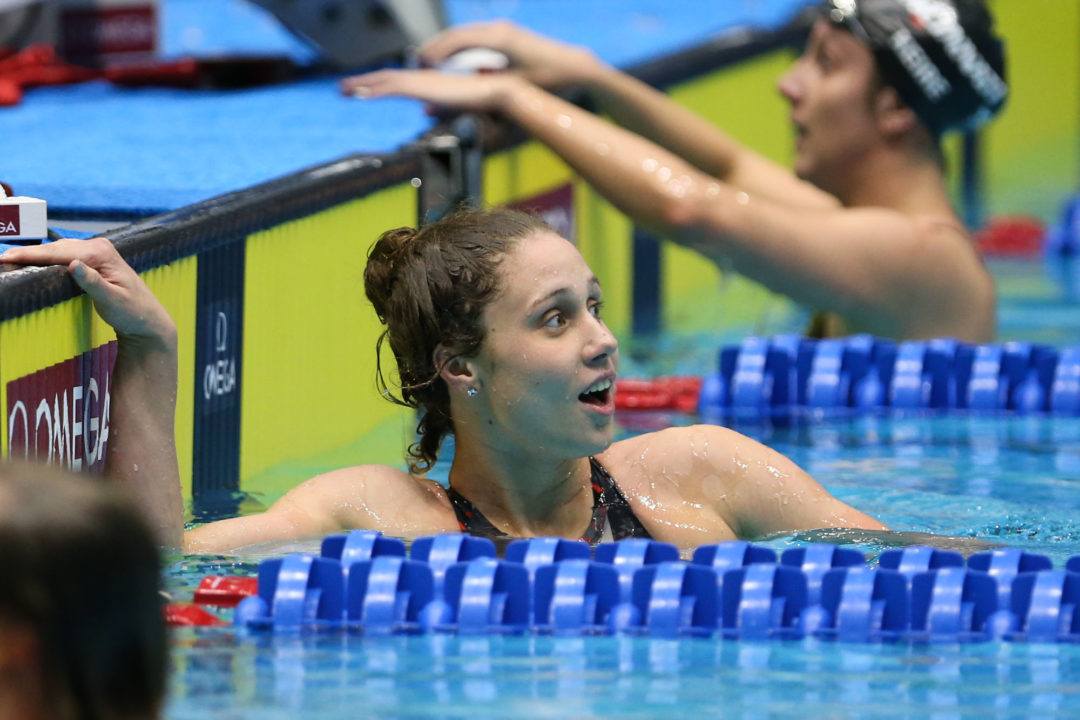 In prelims of the IU Bucceto Open this morning in Bloomington, Mallory Comerford of Cardinal Aquatics put down a best time of 1:58.54 in the 200 free. Archive photo via Tim Binning/TheSwimPictures.com

In prelims of the IU Bucceto Open this morning in Bloomington, Mallory Comerford of Cardinal Aquatics put down a best time of 1:58.54 in the 200 free.

After her insane progressions in college, which culminated in a 200y free tie for the NCAA title with none other than Katie Ledecky, the swimming world waited for Comerford to translate that success into long course. It didn’t really happen as expected– before the 2016-17 NCAA season, Comerford went 1:59.24 at the Olympic Trials. That was a personal best, but it still didn’t really live up to her then-best yards time of 1:42.54.

In late May, she talked with SwimSwam about finding the right gear in long course, and how she was still figuring out how to swim the 200 free in meters. “The transition from short course to long course has been really challenging for me,” said Comerford, who talked about how she tried different strategies like even-splitting or just going out hard right off the bat, but nothing was quite working.

Comerford was 54.46 in the 100 last night– not a season best, but definitely a competitive time, seeing as only Simone Manuel (53.66) and Lia Neal (54.38) have been faster out of any American swimmer since last summer. Manuel and Neal, too, went 54’s last night in Santa Clara. While her 100 wasn’t quite as fast as she’s been this year, her 200 looks like it’s finally coming along.

The key move for Comerford this morning was to hold strong in that middle 100– she was much faster on both of those 50’s than she was in her two other fastest swims in this event. That strategy paid off, as it brought her best time down by seven tenths (albeit from the Olympic Trials to a much smaller meet in Indiana) and her final 50 was still almost as strong as it was the other two swims.

With the American women’s 800 free relay in disarray, Comerford finding the right gear in long course could be key in the USA’s quest for gold in Budapest. We’ll see what she can do in finals tonight, but a 1:58-mid right now is a very good sign for the rising Louisville junior.

Hard to really say that the American women’s 800 free relay is in disarray when they still have Ledecky and Smith. I don’t expect them to face a real challenge this summer.

True, I meant it more in the sense that it’s really not clear who’s going to be joining Ledecky and Smith. Comerford is incredibly talented and looks to be moving in the right direction, but we’ll see in Indy if she can unleash the 1:55/1:56 that she seems capable of.

I think it’s not so much that they’re not in disarray, it is that everyone else is too. For the Aussies, Barrat retired, Ruck bombed Canadian Trials which means that Canada is out a potential 1:55 split, no one knows what’s going on with China, and the Swedes never found a fourth swimmer.

“they still have KL”

you can just pretty much stop there.