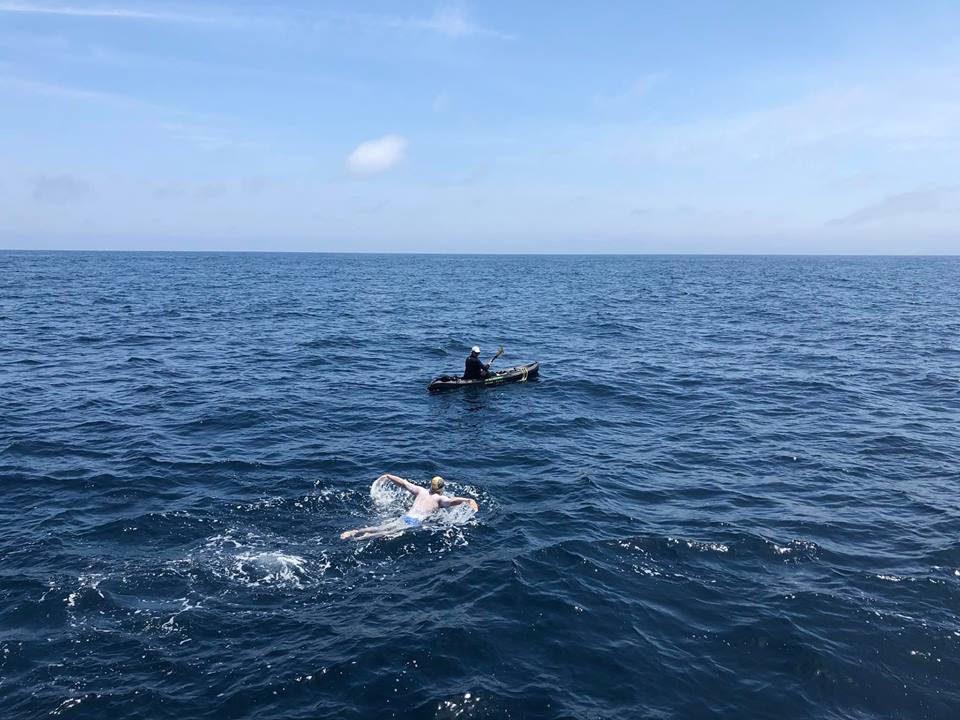 Swimming the Catalina Channel is an impressive feat in and of itself. But one man took it a step further... Archive photo via Sarah Thomas

After Kazakhstan’s Vitaly Khudyakov appealed to the Court of Arbitration for Sport, FINA acquiesced and granted a 26th qualification spot for the Olympics.

After discussions with both the president of FINA and the Tunisian Olympic Committee, Ous Mellouli will indeed race in a sixth Olympics in Tokyo.

Amid a rise in coronavirus cases in Russia, organizers of the European Junior Swimming Championships implemented new quarantine requirements on their athletes

While the worst of the heat fears seem to be waning for open water swimmers, triathletes, and other outdoor athletes, the issue of water quality persists.

A lot of rain in the forecast during the Olympic Games will help keep temperatures substantially lower in Tokyo than it was during last summer’s heat wave.

The six-episode series that shares the stories of various people in the swimming community who are all striving to make waves in the fight against cancer.

Swimming the Catalina Channel is an impressive feat in and of itself. But one man took it a step further last month, completing an all-butterfly swim in 17 hours, 14 minutes, and 57 seconds.

John Batchelder, in his late 30s, had attempted the swim once before – in August 2017 – but had to stop due to seasickness about four hours in. He tried again in October, but the weather wasn’t right. After two failed attempts, Batchelder upped the ante: he decided he would attempt a two-way swim his third time around.

“Getting back out to finish what I started was super important to me for this season,” he told SwimSwam via email.

Note that Batchelder is not the first person ever execute the all-fly swim, just the first man. Canadian Vicki Keith completed it back in 1989, and American Melissa Berkay, now the world record holder for the butterfly crossing, did it in  2016.

Batchelder swam through his childhood and until junior year of high school, and then picked it up again in 2013, motivated by a workplace Biggest Loser competition.

“I was really obese when I first started, but I quickly fell back in love with the water,” he explained. “In my first few months of swimming I lost over 50 pounds and have kept it off ever since.  In just six months I found myself beating the times I had set back in high school, and I think that was when I knew for sure I was hooked.” He now swims Masters six days a week, and when he does get out in the open water, he mixes fly and free training.

It might sound crazy that he decided to opt for a more difficult swim the third time, but Batchelder is no newbie when it comes to all-fly swims.

“All-butterfly ultra-marathon swims has been my thing pretty much right from the beginning when I did my first swim over 10 miles back in 2016 at the 36-mile END-WET (Extreme North Dakota – Water Endurance Test),” Batchelder said. “I did not quite finish that swim, withdrawing at 32 miles, but it was at that point when I was hooked on doing these really long butterfly swims.  Previous to that I had several long butterfly swims, building up to a 10K at Horsetooth Reservoir in Colorado, mostly in response to hearing of others who had done these butterfly swims in years prior.”

Before attempting Catalina the first time, he also successfully swam across Tampa Bay and around Manhattan all-fly. Even with all other swims behind him, this one was still “brutal.” Despite temperate 72-degree water, Batchelder’s escort boat crew told him conditions were “the worst they’ve ever seen for a successful channel crossing.”

“This was hands down the toughest conditions I have ever swum in to date. The winds were blowing pretty good for much of the day, especially all afternoon, and the chop was really intense,” Batchelder said.  “I was also fighting a strong westward current for most of the swim. In fact, while the course was mostly north to south, I found myself swimming much of the day in the southeast, even east southeast, direction just to counteract the current.  It was also extremely hazy, and I never did see Catalina Island until the very end when I was less than a half mile from the finish.”

Much of the battle in conditions like the aforementioned is mental, but of course, it’s hard to ignore the physical aspects. Like in his first attempt, seasickness was a major factor: “I didn’t even make it to my first feed before I started vomiting, and it would not improve at all throughout the entire swim,” said Batchelder. “My crew were trying all day to find ways to help me counteract the seasickness, which included reaching out and getting tons of suggestions from followers on Facebook.”

Food items including canned peaches and baby food pouches were his best options.

“However, at no time did I think I was not going to finish the single crossing,” he said. “The seasickness was extremely frustrating, and I knew it was causing my calorie intake and hydration to be far lower than where they should have been, but I still was determined to persevere.  Quitting was never an option.”

As he was completing the first leg of the swim, however, Batchelder had to decide if he could handle the second. He considered just starting it to see how far he could get, but ultimately opted against it.

“I believed I had the physical and mental strength to complete the return trip, but in the end I decided it was too great a health risk to make the attempt. It was my decision alone to stop after just the single,” he said. “At no time did my crew suggest what I should do one way or the other, and I am thankful that they left it entirely up to me.  While I won’t say for certain if I’ll ever return to attempt a double crossing again, I will say I do really hate leaving behind unfinished business.”

Swimming fly for more then 3 straight minutes sounds like torture to me – so I can’t imagine doing it for 17 freaking hours.

I was there, it was brutal. If I can share, I did a video of it here (https://youtu.be/RGUHgrcjjmk)

And he beat his times he set in high school??

I like the idea of all-butterfly marathons though. Since everything is symmetrical, over time fly is easier on the shoulders than freestyle.

Easier on the shoulders, but harder in every other way…