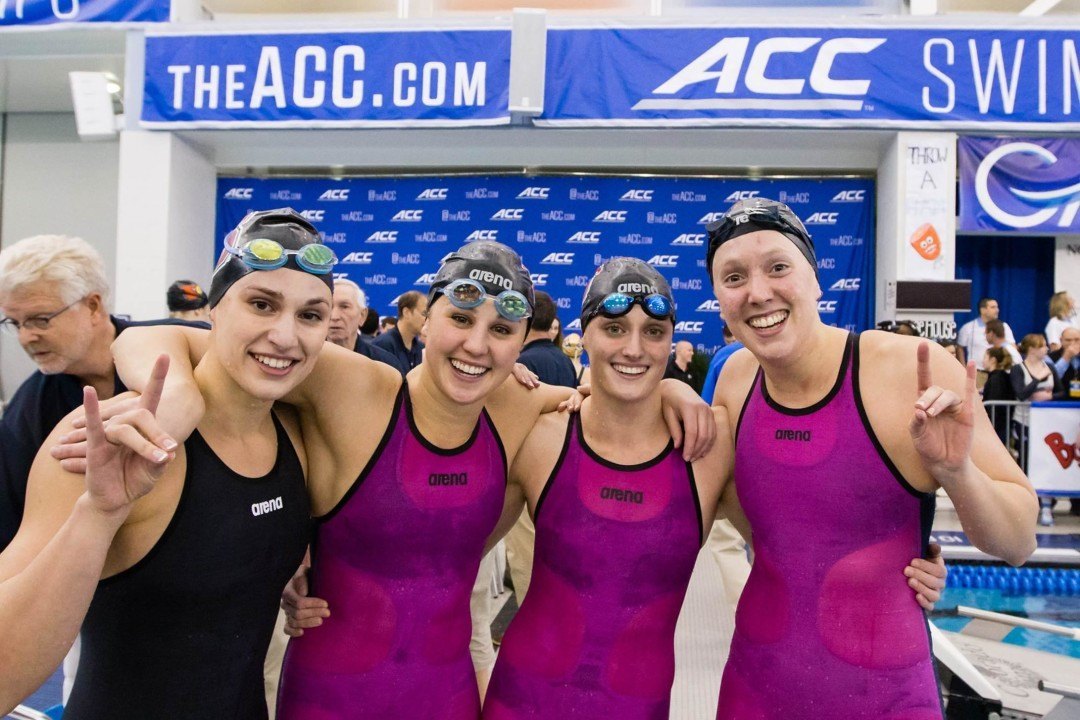 With Alexia Zevnik, Hannah Moore, and Rachel Muller coming off a strong 2016 NCAAs, and Ky-Lee Perry bringing immediate individual scoring potential, NC State should be able to compete for another top 10 finish this season. Archive photo via Tim Binning/TheSwimPictures.com

The NC State Wolfpack women were a force to be reckoned with last season, rewriting 17 school record to kick off the post-season with a 2nd place finish at the ACC Championships. Of the 21 events at ACCs, the Wolfpack stood on the podium for 15 of them.

Weeks later at the NCAA Championships, they battled their way to a 9th place finish, breaking 6 school records in the process. That was the 2nd highest finish in program history, and their first time placing in the top 10 since 1982.

The big losses to graduation for the Wolfpack this year come in the sprint freestyles, as Riki Bonnema and Ashlyn Koletic, who were on both sprint free relays last season, have completed their eligibility. Even without those two, the team is returning a loaded sprint group, and they’ve got a couple of incoming freshman to help fill the gap.

Now-senior Natalie Labonge is returning for NC State, coming off a 2016 season that saw her score individually at NCAAs and play a role in 4 relays. Labonge’s individual score came in the 100 fly last season, but her 22.23 and 48.51 in the sprint freestyles give her the potential to score individually in those as well if she can drop a tenth or two.

Similarly, NCAA qualifiers Krista Duffield (22.48, 48.98) and Courtney Caldwell (22.73, 48.95) also participated in the sprint free relays last season, and will look to drop down into individual scoring range at 2017 NCAAs.

Another piece of the relays, Alexia Zevnik, hasn’t competed in the sprint frees individually, but does give the relays a boost with her sub-48 100 free splits.

Joining the sprint training group this season will be Ky-Lee Perry (22.79, 48.79) and Vassiliki Baka, who are both candidates for the relays this season. Perry is already one of the fastest women on the team, and has potential to score individually at NCAAs with marginal improvements. Baka, a Greek sprinter, doen’t have any yards experience yet, but her 25.99 and 56.47 in the 50 and 100 LCM freestyles bode well for her sprint potential.

The NC State distance group turned heads last season, with Hannah Moore (4:37.92, 15:47.20) and Rachel Muller (4:39.11, 16:02.15) both earning top 3 finishes at ACCs and scoring in 3 individual events each at NCAAs. Moore, a rising junior, swam her way to All-American status in the 500 and 1650 freestyles last season. Paired with Muller, the distance duo gives the Wolfpack the potential to land multiple A-finalists in both of those events if they continue to improve this season.

Muller (1:44.61) will also be a returner in the 800 free relay this season alongside Alexia Zevnik and Natalie Labonge. Missing from that team, however, is now-graduated Shelly Craddock, which opens up a spot in the lineup. Hannah Moore (1:47.34) makes a good candidate for that relay, as well as incoming freshman Vassiliki Baka, (2:03.59 LCM) and transfer Elise Haan (1:46.20).

Freshman Brooke Rubendall (1:49.26, 4:50.91) also has a chance to challenge for a relay spot, as she’ll likely be swimming middle distance freestyle for NC State this year.

Alexia Zevnik was the major player for NC State in the 200 IM last season, placing 2nd at the ACC Championships. At NCAAs, however, she scratched the race to focus on the backstrokes and relays. Should she choose to swim it at NCAAs this year, she could potentially make the top 8, as her 1:56.02 from ACCs was just a tenth away from what it took to get 8th in prelims.

Aside from Zevnik, Kayla Brumbaum (2:00.12) is their only returner who swims this event in the post-season. She was 13th at ACCs, but also ended up scratching the race at NCAAs.

In the 400 IM, Hannah Moore (4:07.64) is a returning NCAA scorer after placing 3rd at ACCs and 16th at NCAAs. While Moore’s big points have come in the distance freestyles, she could tack on a few more points this season in the IM race.

After scoring individually in the 100 fly at NCAAs, Natalie Labonge could bring in some more individual points for the Wolfpack this season. If she can lower her personal best 51.93 at NCAAs, she may have a shot at a top 8 finish, as it took a 51.58 to get 8th in prelims last season.

Krista Duffield will also return in this event after swimming it at NCAAs and placing 10th at the ACC championships. She wasn’t at her best in this race at the NCAA meet, but her personal best 52.64 could put her within a few tenths of B-final scoring range this season.

The Wolfpack didn’t have anyone in the 200 fly at NCAAs, but Lydia Jones (1:57.64) got the job done with a top 8 finish at ACCs, and will return as a senior this season.

Also swimming in the 100 back at NCAAs last season was Courtney Caldwell, who swam a lifetime best 52.26 for 6th at ACCs. If she can dip below the 52-second mark, she could bring in some B-final points at NCAAs this season.

Fresh faces in the backstrokes this season include Ky-Lee Perry and Mackenzie Glover. Perry may opt for the 100 fly or 200 free instead of the 100 back, but she has ACC scoring potential with her lifetime best 54.68. Glover, on the other hand, is primarily a backstroker. Coming from Canada, she hasn’t competed in yards yet, but she’s put up fast long course times with a 1:01.58 in the 100 and 2:13.47 in the 200.

Elise Haan (51.65,1:54.76), a transfer from FGCU, will join the Wolfpack as a sophomore this season. Haan could have an immediate impact at the NCAA level, as she scored as a freshman with her 16th place finish in the 100 back.

Kayla Brumbaum is the only returning breaststroker who made it to NCAAs last season, and is heading into 2016-17 after earning a pair of 4th place finishes in the breaststroke events at ACCs. She was a few tenths shy of making the top 16 in the 100 breast at NCAAs, but if she can swim her personal best 1:00.11 or better this year, she could add some points for the team. Her 2:09.69 in the 200 is in range of the top 16 as well.

The Wolfpack has a strong freshman class that should help them make up for the gaps in the relays this season. Even without Ashlyn Koletic and Rikki Bonnema, they should have fast sprint relays with Ky-Lee Perry coming in and several top ACC sprinters returning.

All of their individual scorers are returning this season except for Bonnema, who scored 1 point in the 50 free. With Alexia Zevnik, Hannah Moore, and Rachel Muller coming off a strong 2016 NCAAs, and Perry bringing immediate individual scoring potential, NC State should be able to compete for another top 10 finish at the end of the season.

Gotta give Ky-Lee Perry a little more credit since she went 22.27 in the 50 Fr at YNats. Pretty sure the Wolfpack Women will continue to rewrite the record book again this year.

Do you think they know one of the men on the team won an Olympic gold medal? If they don’t then they need to stay woke

Without Bartholomew I think UVA gets 2nd at ACCs but finishes top 5 at NCAAs still.

Forgot the backstroke transfer Haan. Never, ever would have imagined NC state women would be better than UNC

They also have transfer Elise Haan, who scored at NCAA’s last year in backstroke.