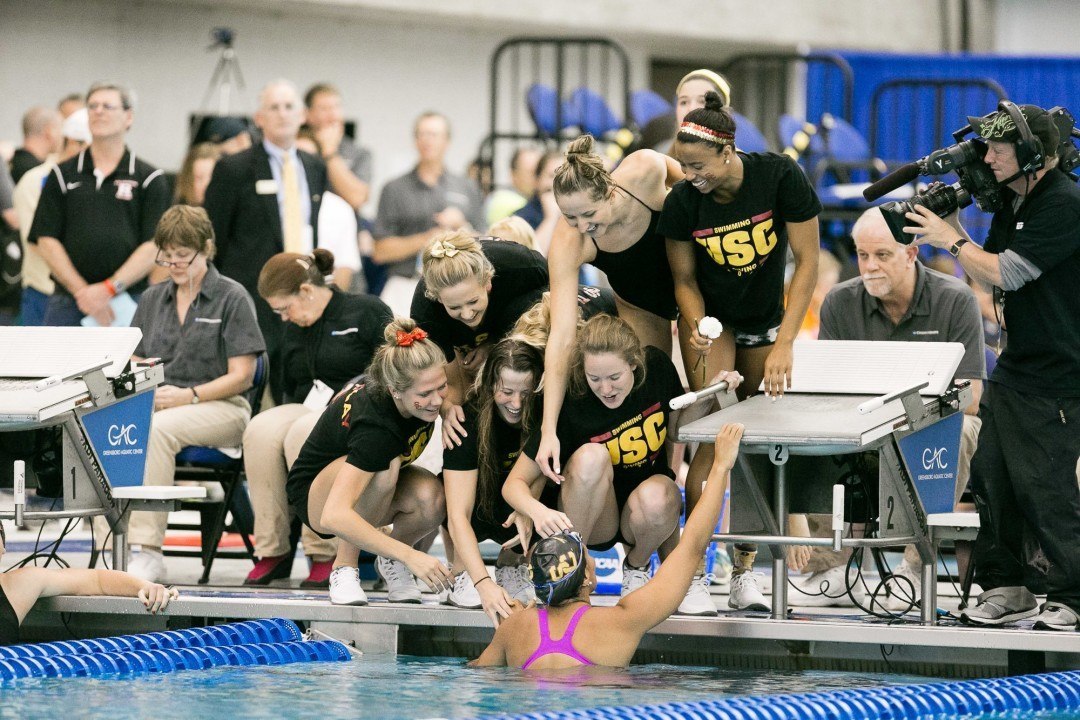 The Trojans have brought in more than enough talent to keep their relays intact, and could easily find themselves matching or improving on their 6th place finish from last season. Archive photo via Tim Binning/TheSwimPictures.com

The Trojan women made program history last season, bringing in the school’s first-ever women’s Pac-12 Championship title. Their success continued at the NCAA meet, as they won their first-ever NCAA title in the 400 free relay and closed the season with a 6th place finish overall.

The Trojans may be without Kasia Wilk and Evan Swenson this season, but they should be more than fine in the sprint department with the addition of Stanzi Moseley and Louise Hansson this year. Moseley joins the team with top times of 22.1 and 48.1 in the 50 and 100 freestyles, making her an immediate NCAA scoring threat and a good fit for the NCAA relays.

Hansson, on the other hand, has shown her speed in long course, as she’ll be heading to USC from her home country Sweden. Despite a lack of yards experience, Hansson’s 54.8 in the 100 LCM free shows that she’s got the speed to make an impact individually and on relays this year.

When they arrive at USC, the newcomers will join senior Anika Apostalon. Apostalon has the speed to throw down crazy splits on relays (exhibit A: her 21.3 and 46.7 splits at NCAAs), as well as score A-final points in both sprint freeestyles individually.

Also looking to return to NCAAs in the freestyle races is All-American Chelsea Chenault, who has big point potential in the 200 and 500 after scoring 11 points at 2016 NCAAs. She was off her bests at NCAAs in her individual races, but she could be swimming in multiple championship finals if she matches her bests of 1:42.5 in the 200 and 4:36.6 in the 500 this season. The Trojans could wind up with multiple A-finalists in the 200 free with Chenault.

In addition to her individual points at NCAAs, Chenault has been an important piece of the Trojans’ 800 free relay, splitting a 1:42-mid to help them to 2nd place in 2016. Also returning from that relay are Anika Apostalon (1:44.3 split) and Kirsten Vose (1:43.0 leadoff), leaving just one leg missing from last season’s team.

As a freshman, Kirsten Vose swam her way into the top 3 at NCAAs in the 200 IM, posting a new best time of 1:54.27. Those were the only points for the team in the IM events, but things are looking up this season. In addition to Vose being  a likely finalist, freshman Tatum Wade could also score in this event with some improvement. Wade comes in with a 1:57.5, within a second of what it took to make the top 16.

The 200 fly is another area where Chelsea Chenault could pull in big points this season with a better NCAA meet. She was 11th at 2016 NCAAs, but her personal best 1:53.1 could be good for a top 5 finish. Swimming in the 200 fly with Chenault was rising sophomore Maddie Wright, who looks like a potential top 16 scorer if she can improve on her season-best 1:56.4 from that meet.

Freshman Louise Hansson could choose to do the 100 fly as her 3rd event, but it does fall on the same day as the 200 free. If she does choose that event for her lineup, she has strong potential with her 58.3 in the 100 LCM fly.

Now returning for her junior season, Hannah Weiss (51.6/1:53.1) will continue to be a key peice of the Trojan team in the backstroke events. In addition to her role as the backstroker on their medley relays, Weiss could be a scorer in both individual backstroke races. Last season, she wasn’t at her best times at the NCAA meet, but if she can match or improve her times from 2015, she should be in contention for a 2nd swim in both at NCAAs.

Kirsten Vose (2:07.46) has been strong for the Trojans in the 200 breast, achieving All-American status with her 8th place finish last season. Another rising sophomore, Riley Scott, gives the Trojans a chance at multiple scorers in that race.

In the 100 breast, Scott is the Trojans’ most likely individual scorer and medley relay swimmer, having placed 2nd in both breaststroke races at the Pac-12 Championships. Her best times of 59.3 and 2:08.8 have her in a good position to score in multiple events this season.

The Pac-12 will be loaded with talent this season, with the likes of Ledecky and Weitzeil among the freshmen in the conference this year. Even so, the Trojans will put up a fight for another Pac-12 title with several returning NCAA scorers and a loaded freshman class.

While USC has plenty of depth at the conference level, they may need to improve in the fly and breast races at NCAAs to bring in enough points for a top 5 finish. They’ve brought in more than enough talent to keep their relays intact, and could easily find themselves matching or improving on their 6th place from last season.

Did the article not say that they would be without Evan Swenson this season?

Article says “May be” with Evan Swenson. Poster says more definitely she will not be swimming.

To clarify, the article isn’t saying “maybe” in the sense that she’d possibly be swimming. It’s saying that despite the losses, the sprint group will be fine

Louise Hansson has the Swedish national record in 200 IM scm in 2:06:29. The record was set in november 2015. I think that time in yards maybe could make an impact.