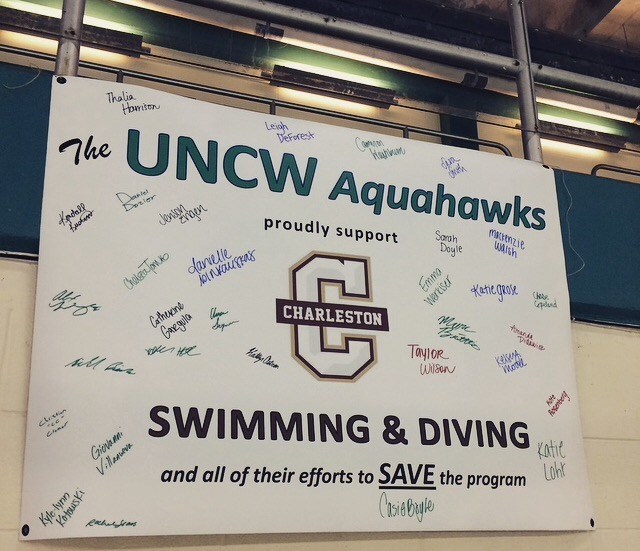 The University of North Carolina-Wilmington welcomed their CAA rivals, The College of Charleston, with a show of support during the quad meet in North Carolina over the weekend.

The College of Charleston closed out the 2014-15 season with a trip to Wilmington, North Carolina for its final dual meets on Saturday. The women competed in a quad meet against UNCW, Liberty, and Georgia Southern while the men swam against UNCW.

For the second weekend in a row, CofC faced off against programs that had once been on the chopping blocks. UNCW’s Chancellor reinstated swimming and diving a year and a half ago, after a strong rally of support to save the program. Last week, the Cougars hosted their last home meet against Clemson, who phased out men’s and women’s swimming in 2012 but maintained their women’s diving program.

Bora Yatagan, Head Coach at CofC, told SwimSwam he was incredibly proud of his swimmers and divers. Rather than focus on their impending fate, the team “really stepped up and swam great. We had a lot of fast swims. The guys won a lot of events and the women did the best they possibly could, given some of their biggest stars were not at the meet.” Yatagan went on to say that the team is scheduled to meet with The College of Charleston’s President, Glenn F. McConnell, on Wednesday to discuss options. “We have put together a plan where we would use a different facility for training and competition. We would consider doing lessons, clinics; maybe in a couple of years we could be self-sustaining from a financial standpoint.”

“The team is looking for a hero. Hopefully President McConnell will be that hero; hopefully he’ll step in and save the program.”

Georgia Southern got strong performances from a number of swimmers and divers. Kylee Parsons won the 200 free and was runner-up in the 100 and 500 frees. The Eagles had several second-place finishers: Abbie Lavallin (100 breast), Lauren Campbell (200 fly, 200 IM), Megan Heller (100 fly), Erin Hembree (1-meter diving). The 200 medley relay of Christina Moran, Lavallin, Campbell, and Elaina Lanson took third; Lanson was also a bronze-medal winner in the 50 free. The Eagles were third in the 400 free relay with Parsons, Moran, Kaylyn Thomas, and Heller.

College of Charleston’s Alexa Namestnik gave the Cougars a third in the 1000 free; Corrine Taylor took fourth in the 200 fly; and Sarah Graif picked up a fifth (50 free) and a sixth (100 free). Diver Megan Norton finished second in the 3-meter dive and third in the one-meter.

UNC-Wilmington earned early points from their medley relay’s second-place finish with Hannah Stephenson, Jenson Engen, Catherine Gargula, and Chelsea Tomko. Engen doubled up with wins in the the 100 breast and 200 breast. Bronze medalists included Stephenson (100 back and 200 back), Gargula (500 free), Christine Souther (200 breast) and Sara Smith (200 fly). Diver Rachel McCormick swept the boards (winning both 1-meter and 3-meter), while teammate Hannah Croxton picked up a third (3-meter) and a fourth (1-meter).