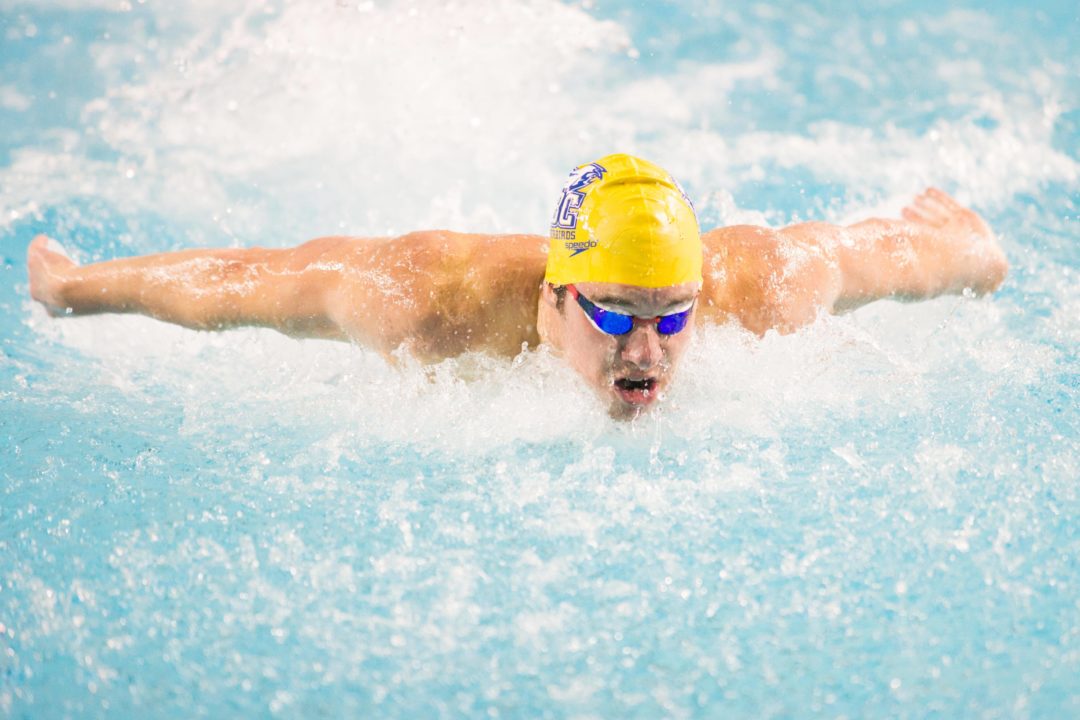 Two big records fell today at the CIS Championships at the Varsity Pool in Toronto today, both broken by University of British Columbia swimmers. Following the completion of night one finals the UBC Thunderbirds are currently sitting first in both the men’s and women’s rankings.

Note: this meet is swum in a 25 meter course.

Barbara Jardin from the University of Montreal took home the first win of the meet with a victory in the 200m freestyle. Jardin faced off against fellow Olympian Heather MacLean from the UBC Thunderbirds, beating her to the wall 1:56.47 to 1:56.93. Top seed heading into the finals Lindsay Delmar from the University of Calgary Dinos finished third in 1:57.23.

Multi-time CIS champion from last year Coleman Allen took home his first win of the meet in the 200m freestyle, bettering his time from last year with a 1:45.13. Dinos captain David Woodman finished second followed by the University of Victoria’s Keegan Zanatta. That win was followed up with a huge win in the 100m fly. Allen broke his own record en route to swimming a 51.44 and taking down Olympian and UofT swimmer Zack Chetrat.

French-Canadian University swimmers dominated the women’s 50m backstroke; Marie-Pier from Laval won the event in 27.71 followed by McGill’s Simone Cseplo in 28.24. Gabrielle Soucisse rounded out the medallists with a 28.55.

Russell Wood from the University of Calgary won the 50m back in 24.32 coming very close to Kelly Aspinall’s meet record. Wood is one of the top backstrokers in the meet and is projected to medal in the 100 and 200. University of Toronto’s Matthew Myers who’s the top ranked university swimmer in the 200m backstroke  grabbed the bronze in 25.07.

Fiona Doyle from Calgary took down Olympian Tera Van Beilen to win the first of the breaststroke races tonight. Doyle won the 100m in a 1:06.27 to Van Beilen’s 1:06.35. Van Beilen’s teammate Rebecca Terejko picked up the bronze in 1:07.15.

After Konrad Bald was disqualified this morning it opened up a medal position in the 100m breaststroke finals. Sergey Holson from the UBC Thunderbirds came into the meet as the sixth ranked swimmer in the event, yet managed to pull off a stunner and take home the gold tonight. Holson threw down a 1:00.18, taking down University of Alberta’s Nick Kostiuk to the wall. Kostiuk finished just behind him in 1:00.24 followed by Dillon Perron in 1:00.58.

Kendra Chernoff was able to grab the University of Alberta their first gold of the meet with a 59.31 in the women’s 100m fly. Marie-Pier Couillard finished second in 59.36 giving her, her second medal of the night after winning the 100m backstroke.

Freshman Tristan Cote looked as though he was going to come home with a big win for Calgary in the men’s 400m IM, but ended up settling for bronze in 4:15.49.Luke Reilly ended up winning the event for UBC with a time of 4:10.95. followed by David Riley from UofT.

Calgary has won the women’s 4x100m freestyle relay a lot over the last couple years at the CIS Championships, but this year’s all about the Thunderbirds. The UBC took down the University of Montreal women en route to gold. The Calgary Dinos finished third.

The UBC men rounded off day one with a huge win over the University of Toronto and University of Calgary in the men’s 4x100m freestyle relay. The team finished in 3:16.21 over Calgary’s 3:16.57. UofT finished third in 3:17.21. The win gave Coleman Allen his third win of the night.

The meet will continue tomorrow, prelims at 10am and finals at 6pm. For full meet results click here.

Patrick – they’ve been added above.