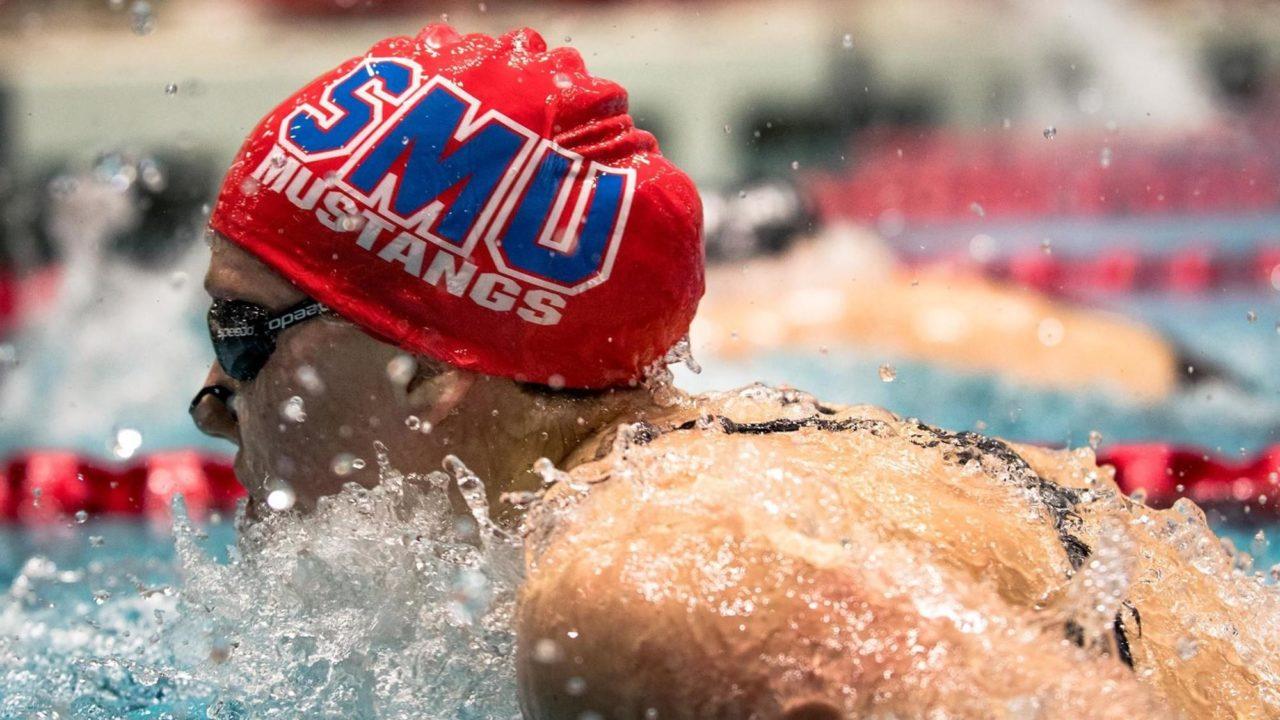 Known to most on the Hilltop as “Coach Mac,” legendary SMU swimming coach George McMillion has died. Current photo via SMU Athletics

Known to most on the Hilltop as “Coach Mac,” legendary SMU swimming coach George McMillion has died. McMillion’s passing on Nov. 7 came just days after the dedication of the new Robson & Lindley Aquatics Center and Barr-McMillion Natatorium last week. McMillion was the head coach of the SMU men’s swimming team from 1971-88 after a standout career as a student-athlete and 14 years as an assistant coach. His impact on the SMU swimming program helped inspire the construction of the new center and led to his name being attached to the facility.

“I will always be grateful to have had the opportunity to be involved with SMU swimming while attending SMU,” said former SMU swimmer and a lead donor to the Aquatics Center, Bruce Robson. “Coach Mac made an impact on my life and the lives of so many others. His influence will continue to be felt at SMU for years to come.”

A lead donor, Steve Lindley, said, “I always admired Coach Mac’s commitment and dedication to and passion for SMU, its swimming and diving programs, and especially his swimmers. You can’t put a value on this. Not only was he a very successful coach, but he was truly interested in and positively impacted all the people he touched. I am also very thankful to all those that helped make the new Aquatic Center and Natatorium a reality. This was Coach Mac’s vision and it is certainly a very fitting legacy to him.”

“Coach Mac’s legacy as a student-athlete, mentor and coach will live on has an enduring legacy at SMU and in the world of swimming,” Turner said. “His accomplishments at SMU are legendary, but it’s the positive impact he had on those around him that will forever define his greatness.”

Former SMU swimmer and a lead donor, Dr. Jody Grant, said McMillion built on a history of winning at SMU.

“Coach Mac added to the outstanding swimming tradition established by Coach Red Barr many years ago,” he said. “It’s been an honor to be associated with the program over the years. Coach Mac will be greatly missed by all of us in the swimming community, but what he helped build here at SMU will live on forever.”

“The Robson & Lindley Aquatics Center is a reality because his commitment and love of SMU swimming and diving inspired others to give back,” Hart said. “While we are saddened by his passing, and I will personally miss visiting with him on Thursday mornings, we take solace in knowing that the Barr-McMillion Natatorium will serve as a fitting tribute and a legacy to his influence and impact on our program.”

“Coach Mac was a fixture on the SMU campus for over six decades, as a student, athlete, teacher, coach administrator and alum,” Sinnott said. “He impacted literally thousands of lives, both young and old, throughout his time on the Hilltop.”

As a student, McMillion was captain of the 1954 SMU team, winning seven Southwest Conference individual championships. McMillion also helped the Mustangs to team championships in 1953 and 1954. He returned to SMU to become an assistant coach for 14 years, then succeeded Coach A.R. Barr in 1971. That same year, McMillion was honored as the Collegiate and Scholastic Swimming Trophy recipient, which is presented annually to an individual or organization which, in the estimation of the recipient’s peers, has contributed in an outstanding way to swimming as a competitive sport and healthful recreational activity.

McMillion led the program to eight consecutive Southwest Conference Championships and was named SWC Coach of the Year four times. He coached 78 All-Americans and 15 NCAA Champions, while his teams earned 14 NCAA top-10 finishes.

“Coach Mac was a big influence on my life and coaching career,” said head women’s swimming coach Steve Collins. “I came to SMU in the fall of 1977 to work as a graduate assistant with the SMU men’s team to learn from George McMillion. During the course of my career, Coach Mac was a mentor and a friend whom I will miss dearly.”

“Our dream of building an Aquatics Center has been realized, and I am so grateful that he was able to see the finished product shortly before his death,” Collins added. “His legacy will live on and be honored in the Robson & Lindley Aquatics Center and Barr-McMillion Natatorium, and through the lives of the many people touched as a teacher, swim coach and friend.  Our thoughts and prayers go out to the McMillion family.”

Memorial gifts may be made to The Coach George McMillion Men’s Swimming Endowment Fund at SMU, online at www.smu.edu/giving or by mail to SMU Gift Administration; PO Box 402; Dallas, TX  75275-0402.

“From the Learn to Swim Program to the Olympic gold medal, he helped young men and women reach their goals, while helping them develop into the people they ultimately became. His legacy will forever be remembered in the hearts of those he touched. He has run his race, and he has won,” Sinnott concluded.

Coach McMillion was also a mentor to me when i started at TCU in 1979. I would go over to Dallas to “pick his brain” about recruiting, team items, and his philosophy. He developed great teams while at SMU. Everyone in the city knew Coach Mac. The best dual meet in the country was in the SMU pool vs Texas in the 1980’s which was always a sell out. We remained friends and colleagues throughout his retirement. So great he was able to see the new SMU pool dedicated last week. His legacy will live on. Richard Sybesma

I’m deeply saddened to hear this news. Coach was a mentor, colleague and friend who taught me much during our year together on the deck and the years after his retirement. I’ll cherish the Maverick games we went to at Reunion and our treks to the old Arlington Stadium and the ballpark in Arlington to watch the Rangers. I quickly learned not to let him drive as, if you ever were in the car when he was behind the wheel, can attest to the fact that it was a white-knuckle experience. He loved B-B-Q, used to change from dress clothes to a shirt, athletic shorts, pulled up white socks and tennis shoes for practice everyday. Oh, and don’t forget the… Read more »