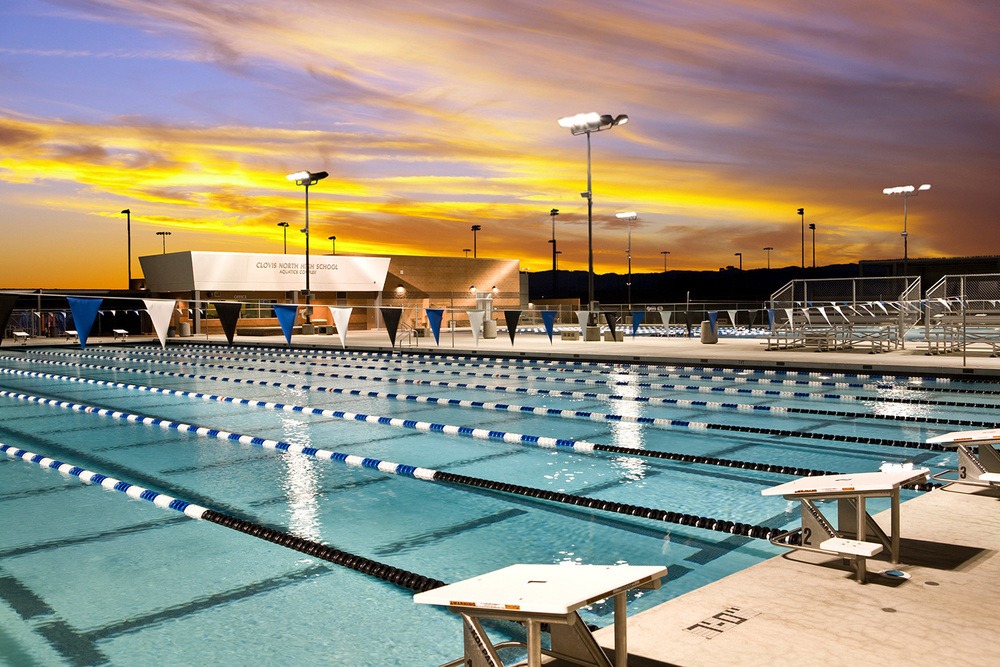 Clovis will be the lone meet on the stop in the western half of the United States. Archive photo via Aquatic Design Group

USA Swimming has announced Clovis, California as the 5th-and-final stop of the 2019 TYR Pro Swim Series circuit. Clovis was the only site previously unannounced, though sources indicated when the other 4 were announced in October that California was likely to be home to the 5th meet.

While a California conclusion to the circuit is traditional, it has historically been Santa Clara in the Bay Area that has hosted the last meet of the series. Now the meet will move about a 3-hour drive inland to the Central California city of Clovis, which is a suburb of Fresno.

Clovis will host the meet at the Clovis North High School Aquatics Complex, which has two 50-meter by 25-yard pools. The main competition pool is a constant 2-meter depth pool, while the other pool has a diving well at one end and a shallow 3-foot depth area on the other end with a 2-meter depth on the other. The facility has permanent spectator seating for 740, with room to bring in additional bleacher seating.

For the first time in 2019, USA Swimming changed the bidding model for the Pro Swim Series shift from one where USA Swimming paid a $20,000 management fee to one where host cities and facilities pay a ‘rights fee’ to host meets. The result is 5 cities that have not recently (if ever) hosted, while long-time hosts like Austin and Santa Clara have been boxed-out.

“We are very excited about the tremendous interest from teams, convention and visitors’ bureaus and sports commissions from across the country, wanting to bring a high-level swimming event to their community,” USA Swimming President & Chief Executive Officer Tim Hinchey III said. “Beyond their great competition venues, our five selected hosts have the resources, contacts and commitment to help market and facilitate incredible events for our athletes.”

It’s a bold strategy Cotton. Let’s see if it pays off for them.

TRYING TO FIND MY BOY WITH THE SANDIEGO TEAM,hAVE A HARD TIME WITH COMPUTORS SORRY!

Claire Tuggle will get a w

So will Justin Wright

Do it for the little guys!!

It will be interesting to see if the same visitors bureaus, sports committees and host sites in addition to paying the $10k to even bid have also secured reasonable lodging, car rental rates and flights for teams traveling to these relatively small regional sites. If not, I think there will be an influx of competitors attending such meets as Atlanta Classic, Charlotte Ultra Swim, Fran Crippen Invite, etc which is the exact opposite of probably what USA Swimming and TYR had hoped for the future of the Pro Swim Series. But major cities generally offer more options in flights, rentals, lodging something clearly not considered. Ticket pricing last I heard had not been released. Will be interesting to see what… Read more »

Knoxville currently has ONE hotel listed and the entry fee price has increased from $15 to $20 per event. That is a 33% increase from fees charged last year for Pro Swim. Maybe USA Swimming should answer to where the bid money and additional entry fee money is going?

This could be a situation where USAS wants $X/event, and the meet host wants $Y/event, so the cost is $X+Y/event. The additional $$ is likely going back to USAS to cover the meet host fees!

Kind of related: turns out at least one team in the country increases meet entry fees for their swimmers (when not the meet host) and pockets the difference. Is this normal?

“For the first time in 2019, USA Swimming changed the bidding model for the Pro Swim Series shift from one where USA Swimming paid a $20,000 management fee to one where host cities and facilities pay a ‘rights fee’ to host meets.” USA Swimming is no longer covering host fees. They are charging fees, $10,000 fees, for teams to even bid!

There’s still a huge financial incentive for National Teamers in the APA to swim these meets. So at the top end, it won’t be a full-sail blowout.

You do bring up an interesting point, though. I wonder if the bigger cities didn’t bid at all, or were out bid. It’s definitely a gamble for USA Swimming. I can see why they wanted to stop paying meet hosting fees, but asking for payments was the gamble. Guess we’ll find out if it pays off.

I have to believe Santa Clara will still have a meet and it will be highly attended.

I wonder if meets like the Charlotte UltraSwim, the Irvine Grand Challenge, and the Mission Viejo SMOC will see a resurgence in interest this year due to the less common (and harder to access) venues being chosen.

Do they not want spectators from afar to attend? If travelling and lodging are hard to come by, the inconvenience of it all is enough to deter any potential viewers.

Clovis/Fresno is large, there are plenty of hotels, and the venue is way better than Santa Clara’s. We’ll see if the van drive from the airport to Clovis will be a huge issue.

I have to imagine athletes will enjoy having a way larger area for warmup/warmdown compared to Santa Clara’s diving well. Santa Clara was going to build the 2nd pool and it didn’t happen.

I think Clovis will be fine. It will also give athletes experience dealing with the heat (if it does get hot) so they are more used to dealing with situations like the heat at nationals last summer.

103 degrees is more heat than they need to have experience dealing with. They had better install a ton more shade and masters than they currently have on that deck.

2
-2
Reply
break it down
Reply to  CraigH

The second week of June is before the hottest time of summer, with average highs in the low 90s. The more worrisome issue will be the air quality.

2
-1
Reply
Stan Crump
Reply to  break it down

Usually, Yosemite isn’t burning down yet in June. Air gets worse in August.

Pretty sure it got hotter than 103 in Irvine last summer so not sure what you are getting at here. 103 would be perfect experience

…sorry I may be insensitive to the indoor pool population. I’m used to sitting at all day outdoor summer meets in the super hot stuff. Just bring a big hat and sit under an ezup and it’s all good

Irvine rarely gets that warm haha. Last summer during Nats it was between 80-90 degrees outside, which is good swim meet weather IMO as a fellow outdoor summer meeter

I remember the last time it was in Irvine (was that 2014?), our computers were overheating and shutting down.

Are you sure Joe? I thought there was some crazy heat wave and it was bothering the swimmers. Maybe I’m remembering things incorrectly

Here’s historic averages for the zip code that the pool is in: