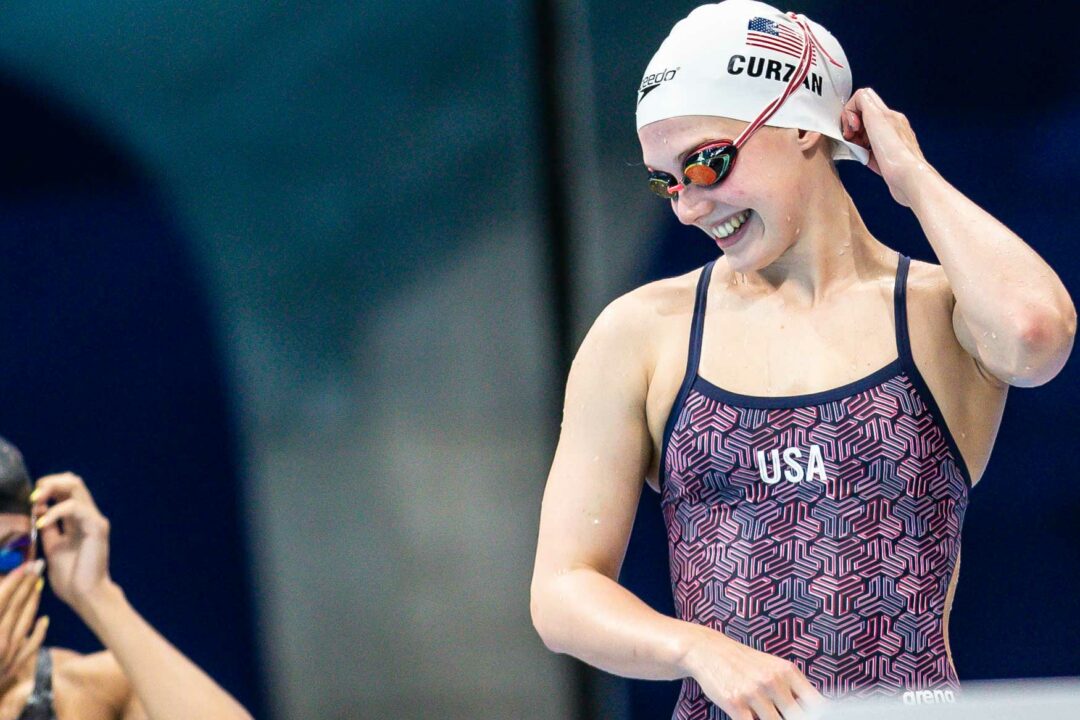 The Tokyo Olympian and Stanford commit broke the 100 fly, 50 free and 100 back records in a dual meet against the Baylor School. Current photo via Jack Spitser/Spitser Photography

Cardinal Gibbons High School senior Claire Curzan broke three National High School Records on Saturday in her team’s dual meet against the Baylor School. The two teams have set up a series of regular dual meets across state lines; this year, Gibbons made the 7-hour drive west from Raleigh, North Carolina to Chattanooga, Tennessee for the meet.

The meet was held in short course meters, meaning in a 25-meter pool. That is not the usual high school course, but it is an approved course alongside the much-more-common short course yards.

More and more teams have been holding meets in short course meters, which has resulted in a dramatic improvement in the quality of short course meters National Records in recent years, with big names like Destin Lasco, Brendan Burns, David Curtiss, Matt Fallon, Ellie Waldrep, Erika Pelaez, and Josh Zuchowski among the recent additions.

First, in the 100 fly, Curzan swam 57.08. That crushed the previous record of 1:01.01 that was set by Aspen Gersper of the St. Andrew’s School in Florida in September of this year. At that meet, there were five National Independent High School records set.

The next record to fall was the 50 free when Curzan split 24.94 to lead off Cardinal Gibbons’ 200 free relay. That broke Erika Pelaez‘s record of 25.01. Pelaez also swam her record at that meet in Florida in September, though her 100 free time of 54.75 survived Saturday’s meet in Tennessee. It was a close call, however, as Curzan went 54.80 leading off the 400 free relay in the last event of the day.

That Cardinal Gibbons 200 free relay finished in 1:48.75, which missed the National Independent High School Record of 1:45.70 set by the St. Andrews School in September – a relay that included Gersper.

Curzan finished her record-breaking streak with a 58.40 in the 100 backstroke. That broke the National High School Record of 59.87 that was set by Ellie Waldrep of the Baylor School, which hosted this met, in 2019.

In spite of the regular series between the two schools, there was no big matchup between Curzan and Waldrep last season because of scheduling conflicts. Waldrep is now a freshman on the swim team at Auburn.

Curzan was a member of the Tokyo 2020 U.S. Olympic Team, where she won a silver medal as a prelims leg of the women’s 400 medley relay. While best known for her butterfly abilities, the Stanford commit is a backstroke National High School Record holder in both long course and short course.

For Curzan, this meet was a good tuneup ahead of the short course meters World Championships coming up in December. There, Curzan is scheduled to swim the 50 free, 50 fly, and 100 fly for Team USA.

That is a really nice high school pool facility.

I guess there’s not a class on “good burns” at whatever rival school you go to, because this was not one.