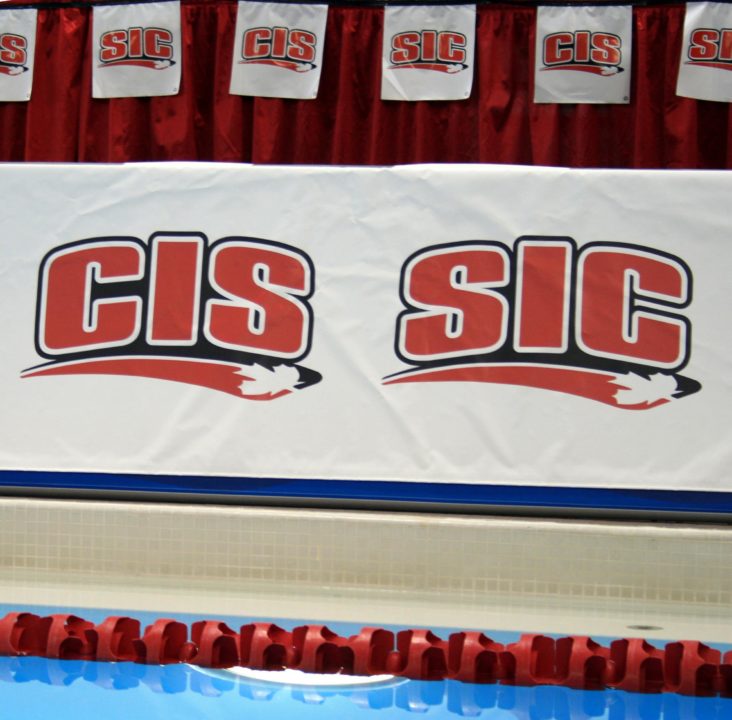 The men's side is a 3-way race for first. Who will come out on top?

What is sure to be another fast night of racing in Calgary began with Dinos SID once again singing the national anthem in front of a full house.  Keep your mouse on the refresh button, all the info you need is to your right.  Thanks to Team Aquatic Supplies ( @TeamAquatic ) for making this meet coverage possible!

Gabrielle Soucisse (Carabins) led the whole way, finishing over a body length ahead of the field in 59.08.  It was a close race for second, but Genevieve Cantin (Laval) got the best of Calgary’s Erica Morningstar touching in 1:00.59 to Morningstar’s 1:00.81

Kendra Chernoff (Alberta) put her head down in the women’s 50 fly, not breathing on the second 25, but she could not hold off Caroline Lapierre-Lemire (UQTR) who out-touched her at the finish 27.22 to 27.29.  Third was Guelph’s Alisha Harricharan at 27.42.

Toronto’s Mike Smerek won the 50m fly for the third time in a row, giving his team a much needed twenty point win over UBC’s Coleman Allen who has been unbeatable so far this meet.  Smerek cranked up his turnover and pulled away after the turn, touching in 23.69, just off his winning time from last year.  Coleman Allen finished in 24.02 and Alberta’s Josh Au was third in 24.37.

As Savannah King (UBC) increased her lead over the trailing Dinos to win the 400 free for the third straight year, so did the UBC Thunderbirds increase their lead over the trailing Calgary Dinos.  King touched in a laboured 4:09.24, well ahead of the second place 4:13.44 of Calgary’s Lindsay Delmar.  Third was Julianne Brown in her final meet as a Dino, touching in 4:14.09.

Two favourites, David Woodman (Calgary) and Zack Chetrat (Toronto) bagged the 400m free in favour of the relays (double points) and for Chetrat, the 200m Fly.  That left Toronto’s Frank Despond, the defending champion, all alone to win in 3:49.77 and take the men’s meet lead for Toronto.  Woodman won the slack-fest, pulling away from Chetrat with 100 to go and wining his team an extra point.

UBC Thunderbird Tera van Beilen wasted no time in bouncing back from a disappointing Day 1 of the CIS Swimming Championships.  Four swimmers touched at the 100 in 1:09 but van Beilen pulled away in the last 75 meters to win in a 2:23.87.  Tera represented Canada at the 2012 Olympics and is one of two athletes at this meet supported by our fantastic sponsor, Team Aquatic Supplies.  Back in second was 100 breast winner, Fiona Doyle (Calgary) at 2:24.94 and in third, also from Calgary, Tianna Rissling at 2:25.25.

Calgary’s Jason Block put on another show in front of his home crowd, destroying the field with a 2:09.86.  He took the lead to the first 50 and only extended it from there.  Frederic La Blanc, the defending champion, settled for silver in 2:12.41.  UBC Thunderbirds rookie Evan Broderick was able to sneak into third ahead of Lethbridge swimmer Jeffrey Nicol in the final 50, touching in 2:13.31.

Another gold medal for Kelly Aspinall (22.16) as the UBC Thunderbirds went 1-2 in the 50m freestyle.  Teammate Luke Peddie was second (22.28).  The Thunderbirds have dominated the 50m free of late, filling over half of last year’s final on their way to the men’s team title.  Third was gutterball out of lane 1, Evan Van Moerkerke (Guelph) in 22.46.

There’s only one word to describe the women’s 200 fly final: ballsy.  Victoria’s Steph Horner, a Canadian Olympian in 2008, pulled off a major upset to win from lane 8 in 2:12.93.  Horner and Kendra Chernoff (Alberta, lane 1) took the race out fast from the outside.  Chernoff fell off the pace, finishing in 6th at 2:17.96.  Horner was able to hold on, taking more strokes than a sprint freestyler, and out-touch Toronto’s Vanessa Treasure who finished second in 2:13.21.   A tired Lindsay Delmar (Calgary) was third in 2:16.36.

After a nice, relaxing 400 free, and unshaven Zack Chetrat was ready to race in the 200 Fly.  He posted a 1:55 to dominate the field and win his fourth 200m fly title in a row.  Coleman Allen took his second silver medal of the night on 1:58.10, holding off 2012 Canadian Olympian David Sharpe (Dalhousie) who was eventually disqualified for a turn infraction.  The bronze medal was awarded to Calgary’s Thomas Jobin (1:59.40).

The UBC women lead Calgary by a significant margin going into the relays.  The Toronto men lead Toronto on the men’s side by only four points (361 to 357) which is equivalent to one or two placements in the relay.  Last year it was an 11-point victory for UBC.  Calgary men trail with 291.

The UBC Thunderbird Women all but sealed Calgary’s fate with a win the the 4×200 freestyle relay.  The Thunderbirds lead the tight match all the way through and finished in a time of 8:00.55 to Calgary’s 8:02.15.

UBC head coach Steve Price made a risky move swimming the same sprinter’s relay for the 800 free relay as he did for the 400 free relay.  That UBC relay was able to win the 400m in a 3:15.53.  Last year’s men’s title was won by an eleven point margin, equivalent to one eighth place finish.  But the 800 free relay proved a little long for the 400m team.  As Toronto pulled away from them, so did their hopes of tying it up by day’s end.  Calgary Dinos led the way, well ahead in 3:14.27.  Toronto was next in 7:18.33 followed by the University of Alberta Golden Bears impressive underdog swim in 7:19.58 and in fourth the UBC Thunderbirds (7:19.83).

It was the University of Alberta Golden Bears coming third, not UVic.

Well, I feel like an idiot. Especially since you talked to me about this right after the race. Thanks Joe! Will fix.