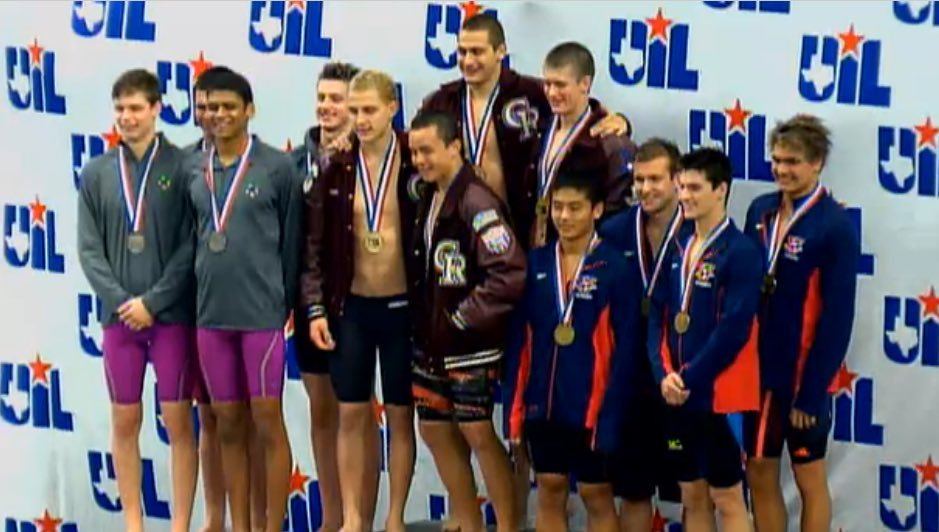 The boys of Cinco Ranch High School (middle) took down a 23-year-old record this weekend at Texas 6A High School State Championships. Current photo via via @GlobalVine Twitter

Although they finished third overall, the Cinco Ranch team had the most exciting performance of the Texas 6A State Swimming Championships, taking down a 23-year-old Texas state high school record by over half a second.

The Southlake Carroll men won the team title by over 100 points, setting a new 400 free relay record along the way, and the men of Austin Westlake finished second overall.

Cowand later came back to win the 100 back in 47.40, missing the individual record by just .03. He collected three gold medals total; the Katy Cinco team of Cowand, Christopher Hung, Fales, and Betts also won the 200 medley in 1:33.01, narrowly outswimming Round Rock Westwood’s 1:33.25.

The Southlake 400 free relay record came from Alex Zettle, Jack LeVant, Austin Whalen (a Georgia Tech commit) and Colter Carman, who came together to destroy the previous 3:02.32 set by Klein in 2015, going 2:59.69. They were the only team to break three minutes, but Westlake also came in under the previous record, clocking 3:00.90 for second.

Mike Thibert of Mansfield High School, a Texas A&M commit, won the 100 free in a field packed with talent, swimming a 44.49. Six of the eight swimmers in the championship final were seniors, including second-place finisher Smilenov, who clocked 44.96.

UNC commit Brendan Feehery of Jesuit College Prep won the 200 IM in 1:48.33. He came close to a second title in the 100 breast, but Austin Westlake’s Matthew Willenbring outswam him by just one one-hundredth. Willenbring won the event in 56.20, and Feehery took the silver in 56.21.

The 6th year in a row! Wow building a dynasty over there! Is the 295 points be a record in its self?

295 is the record for Boy’s points in the largest UIL Texas Classification. Old record of 286, by Southlake Carroll in 2012. Only 45 individual points are graduating this year.