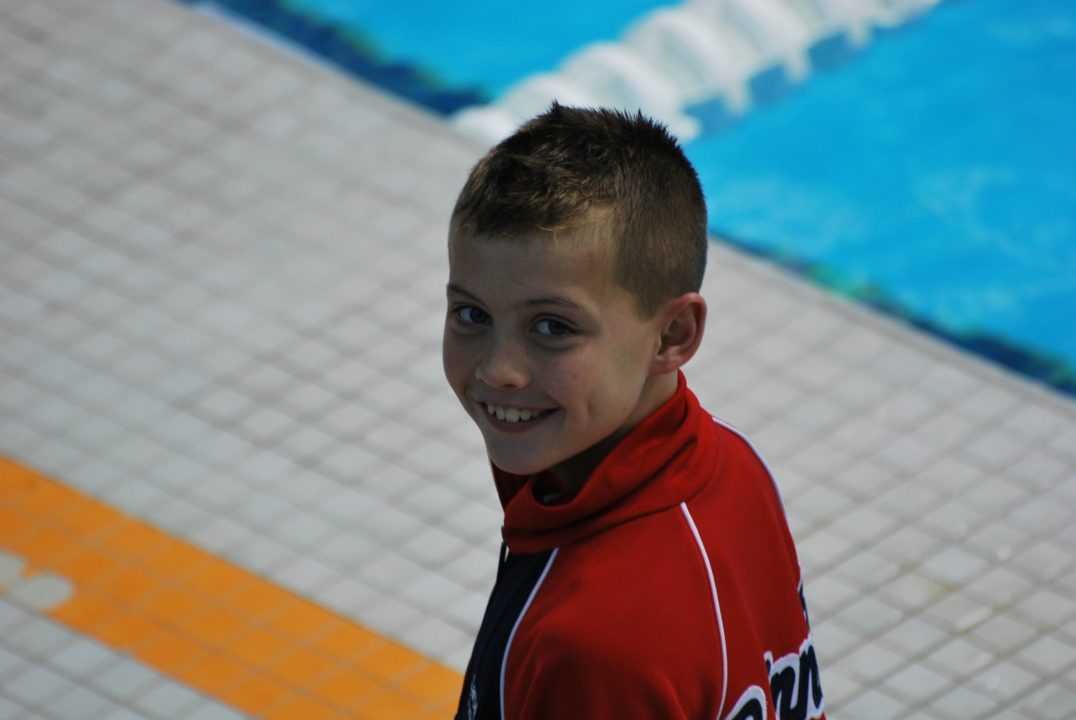 The Cincinnati Marlins 10-year old broke a record that has stood for 16 years.

With his 50 fly swim of 30.26, he broke the 10 & under boys National Age Group Record that has withstood a slew of impressive attempts – including the great Michael Phelps, who holds the 100 mark for that age group.

The old record belonged to MJ El-Amin in 30.55, set back in 1996. El-Amin would go on to be an Olympic Trials qualifier and be one of the most prolific swimmers in the history of Florida A&M before the varsity program was cut.

The young Marlin is within a second-and-a-half of Phelps’ mark in the 100. He still has at least two big meets, the LSC and Zone Championships, to swim before aging up, so he could still have records to swim.

Foster also paired up with teammates Ian Brann, Aaron Sequeira, and Jacob McDonald to set an Ohio LSC Age Group Record in the 400 medley relay at 5:11.13. If you can imagine, that swim cut nearly 30 seconds off of the 5:40 that was set by the Greater Toledo Aquatic Club in 1984. A 27-year old record going down by roughly 40-meters is stunning.

This meet, though just a mid-week “time trial,” is an officially-sanctioned USA Swimming event; the Marlins hold one every long course and short course season in the famed Keating Natatorium at St. Xavier High School. The Marlins are one of the most storied club programs in the history of American swimming, having produced 23 Olympic medals, 15 World Records, and a stunning 60 National Champions.

Update: a video of the swim has been added above, and his technique looks pretty solid. A wide entry, stays pretty low to the water. A stroke any 10 & under coach would be happy with.

Congratulations to Carson as well as Ian, Aaron and Jacob. Well done Marlins.

I did not know they kept track of records for 10 & under. They should not! Our LSC does not.
This does not mean anything but he is most likely much bigger than the rest of kids. He has about 25% chance to be good when he is 14-18. 10 & under should be working on technique and competing on small scale, not trying to break records. Totally wrong.

Your LSC is doing a disservice if it truly doesn’t keep records for a category kept at the national level. He’s likely not “trying to break records,” but doing so as he’s having a great time competing at a high level. You have no idea about his technique – typically NAG record holders have great technique at any age. You need to dial it down a thousand.

It was a time trial, so, yes, he was trying to break the record.

Kids of average size and average yardage CANNOT swim that fast no matter how good their technique is.

PsychoDad let me clarify. This “time trial” is a full team event, and it also is deemed a “championship qualifier” where kids can get another chance for cuts. It’s called a time trial, but is effectively an intrasquad meet. Most teams in the country have them.

Mujahid was the same size as his other competitors when he set that record (and his 11-12 records before they were broken). He had perfect technique, and was one-of-a-kind at the time.

Ohio keeps records the 10 & Under 400 relays because back in the 80’s the pool that was used for JO’s did not have blocks on both ends, so the 10 & Unders did 400 relays. The records are primarily that old because they have been uncontested for 20 years. All of those records were from 1984 until the last 2 years when they were all broken by 20 seconds or more because some more meets in the area started having those events.

Intersting Cpierswim! Good piece of info, that would explain how badly it was beaten. Love nuggets of swimming history like that.

PysychoDad: He is of average size. You are jumping to too many conclusions about a young swimmer you know nothing about.

Just added a video of the swim. Technique looks pretty solid to me…

Solid but not “perfect” as some suggested. He does not anchor his arms (it is all about strength for him). His reach is short and he makes up for that with a lot of strokes.

Here are rules I would love to see in place for 10 & under:

1. Not allowed to swim Long Course.
2. Not allowed to practice in USA Swimming clubs from April 1 until September 1. Go swim in summer league.
3. Cannot practice more than 5 hours a week excluding dryland.
4. To qualify for End of SCY Season Championship and swim ANY event, each swimmer must meet qualifying times in 50 yard events in ALL strokes. Qualifying times are per age.
5. Kids 6 and younger cannot join an USA Swimming club. I see 4 year old swimming LC. What is the point of that?

In current system, all we do is using poor kids: parents, coaches, clubs, and even journalists (in this case).

Congrats to him.
Braden, any news of Michael Andrew? I know you follow his career.
And if you want fast times perhaps you must look at the PV long course age group championships of this week with the young Isabella Rongione. I follow her progression for many months. I don’t know if she will be tapered and if she’s still 12 but if yes she could break a few NAG records.

We actually ran into the Andrew family in Omaha! After Michael aged up, they took a lot of time off from competing. Their plan for the next two years is more training and less competition as they work on moving him to the longer distances mandated by the older age groups.

Thank you for the answer.

Isabella broke the 11-12 800m NAG record in June and is close in the 400. She is a super strong swimmer and a great kid. She ages up in September. Chances are she will not taper until Super sectionals in Buffalo or J Nats. Plenty left to come.

There are several PV 11-12 & 13-14 girls from PV in the top 10 list. They probably won’t be tapered for seniors or Jo’s but will be ready to romp at super sectionals.

Thank you for the news. And yes I correct what I’ve said. She swims this week at the PV long course senior championships. It looks she’s a great freestyler and a very good all-around swimmer. Unlike men the american freestyle on the women’s side looks incredible in the next years with Katie Ledecky, Becca Mann and Isabella Rongione.

Look at those dimples! So stinking cute.