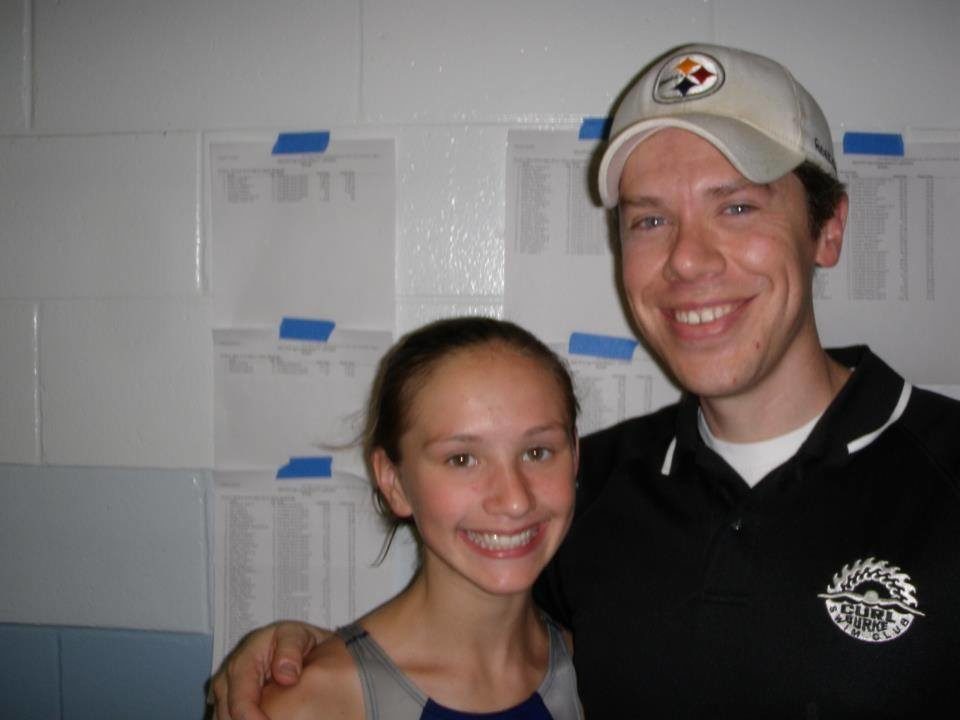 Bayer and her old 9-10 coach David Hall shortly after breaking the NAG Record.

The U.S. Olympic Trials are an incredible meet, and an incredible, jaw-dropping experience. But while the whole of the swimming community keeps one eye on Omaha, the rest of the swimming doesn’t stop. Training continues, and meets still happen in other parts of the country.

One such meet was going on in the Potomac Valley, where on June 24th the Potomac Marlins hosted some of the DC-Area’s best age group swimmers.

That includes Curl Burke’s Cassidy Bayer, a 12-year old who posted a 2:18.61 in the 200 long course fly to win the race by 30 seconds. Not only did that earn her a huge victory, it handily broke the 11-12 girls National Age Group Record. The old record was set by Courtney Kalisz (of the North Baltimore Kalisz’) at 2:19.32 in 2003. This swim also gives her a Winter Nationals cut at only 12-years old, meaning she’s achieved those cuts in the 100 and 200 butterflies in both courses.

Cassidy didn’t swim the 100 fly at this meet, but with a best of 1:03.78 she’s just over a second away from Dana Vollmer’s record in that race as well. She should have a few more opportunities before aging up on September 9th (She was born 9-9-99).

The Potomac Valley, and specifically Curl Burke, had a great week to close out June. As Bayer was posting this swim, one of her teammates, 15-year old Katie Ledecky, was preparing to break National Age Group Records at Trials and even earned her way onto the Olympic Team in the 800 free. Curl Burke is the biggest club team in the country

Bayer trains under Paul Makin in the Virginia arm of the team, whereas Ledecky is across the state-line in Maryland working with Yuri Suguiyama.

Full results from this meet are available here.

Pretty good… Championship season is shaping up to be very exciting for age group swimmers across the country. Look for fast times starting the end of the month and into August!

Even she recognizes that her 9-10 coach helped her achieve her success. And she’s 12. If only ASCA would follow suit.

Congratulations on a great accomplishment, and best of luck in the future. May this be just a stepping stone to a bright future in swimming. And congratulations to Mom and Dad and all your coaches and swim teachers for being your support along the way.

Is there something magic for swimming in this part of USA? It’s incredible the number of fast young swimmers there.

Surprisingly, the Potomac Valley is a hot-spot for swimming. First, I think it has to do with the very competitive summer swim leagues. In Fairfax County the Northern VA Swim League (NVSL) has over 15,000 swimmers organized into 102 teams and 17 divisions. Across the river, Montgomery County has a similar size program. There are other smaller leagues in the area including country club leagues. Many kids in the area swim year round to be competitive on their summer team. Summer league is big here! Second, there are many great clubs; Curl-Burke and Rockville Montgomery have over 1,000 swimmer each. Other great clubs include Fish, Mako, Machine, York, to name a few. The Local USA swim meets are huge and… Read more »

Va Swim Mom — totally agree — PVS is physically one of the smallest LSCs but one of the largest in terms of participation. The biggest issue in continued growth IMHO is the difficulty in getting enough pool space/time and enough pools for the meets. My kid has aged up to seniors but again the Age Group LC champs is so big they’re having to start the 13-14s prelims super early each morning. Bobo — it’s just a great swimming environment — summer swim, high school swimming, and the US Swimming clubs are active, competitive and fun. Congrats to Cassidy and GO KATIE!