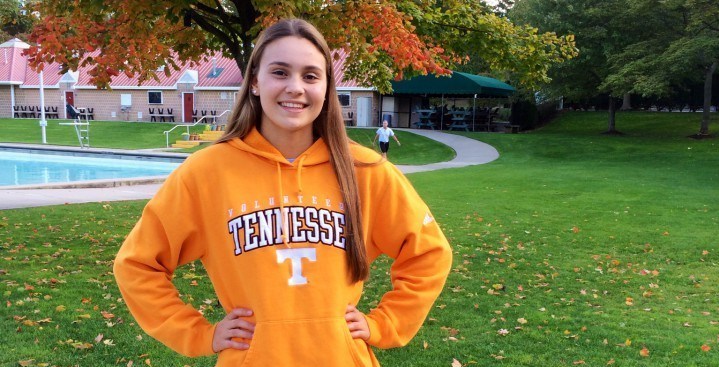 Pheonix Aquatic Club's Christina Paspalas verbally committed to swim for the University of Tennessee for the 2015-2016 season, bringing backstroke talent to what is already turning into an impressive recruiting class. Current photo via Christina Paspalas

Pheonix Aquatic Club’s Christina Paspalas verbally committed to swim for the University of Tennessee for the 2015-2016 season, bringing backstroke talent to what is already turning into an impressive recruiting class.

Paspalas swims a 54.02 in the 100 yard backstroke along with a 1:58.80 in the 200 yard back, the 100 being her best event. Other than backstroke, she holds decent times in the sprint freestyles which includes a 24.11 in the 50 free which is a good starting point to develop her into an all-around relay swimmer.

Paspalas would have finished 17th at the 2014 SEC championships in prelims with her current personal best of 54.02. That time is very similar to the times swum by both Madison Hahn and Christian Leander of Tennessee who placed 17th and 18th in the 100 back finals last year respectively. Senior Lauren Solernou who was the main backstroker on the team, taking the leadoff swim on the 4x100m medley relay, finished eighth in finals, but will not be returning for the 2014-2015 season having finished her senior year.

Without Solernou, it’s likely that Hahn, Leander, or some of the current freshman who have been identified as backstrokers will try and emerge as the team’s top backstroke star making the backstroke training environment very competitive at the University of Tennessee.

Paspalas will find herself entering the 2015-2016 season with the Vols in a fantastic atmosphere to improve her times and compete with the others who are trying to establish themselves.

Paspalas won’t just benefit from the training atmosphere but indicated that the overall team atmosphere is something that she’s looking forward to saying, “I chose Tennessee because of how close the team was.”

Paspalas based that on her recruiting trip, “I saw the whole team circle up before practice and come together and that’s something I really liked.”

“I can’t wait to be surrounded by the amazing swimmers and coaches at Tennesee next fall.”