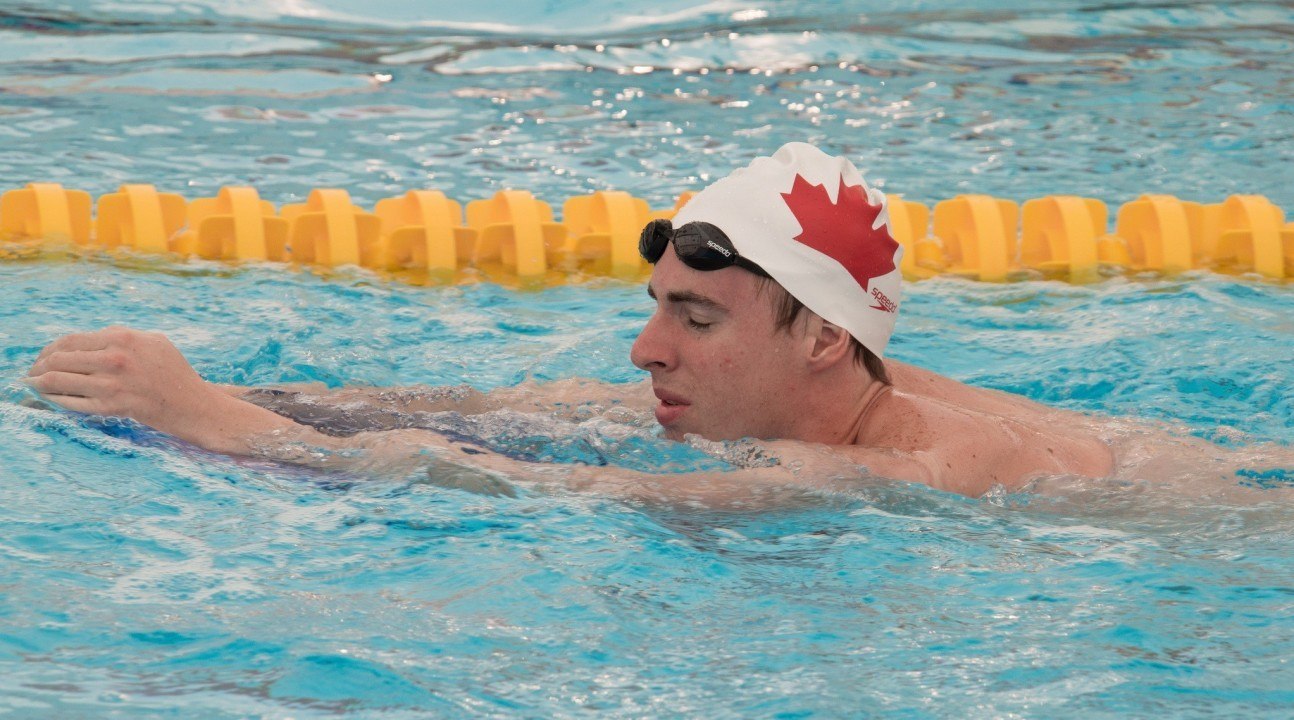 Chris Manning has been a staple athlete on the University of Toronto's roster throughout the five years he has competed as a Varsity Blue. Unfortunately, all good things have to come to an end, and Manning has used up all five years of eligibility in the CIS and thus is finished competing in Canadian collegiate competition. Current photo via Rick Pelletier

Chris Manning has been a staple athlete on the University of Toronto’s roster throughout the five years he has competed as a Varsity Blue. Unfortunately, all good things have to come to an end, and Manning has used up all five years of eligibility in the CIS and thus is finished competing in Canadian collegiate competition.

Manning has had a very successful career. He’s taken home titles at both the CIS and the OUA Championships, even grabbing two individual wins at the 2014 CIS Championships. This year, he picked up a bronze in the 50m freestyle to add one more individual medal to his pallet and round out a solid career.

“For me, the CIS system has been an overwhelmingly positive experience and has afforded me a number of incredible opportunities. Not only have I been able to represent my university and my country internationally, but I’ve been given the opportunity to graduate from one of the best universities in the world.”

Manning is finishing up his degree at the University of Toronto this April, but that’s not the only big event that Manning has to look forward to. April 1st marks the beginning of the Canadian World Championships Trials held in Toronto, Ont.

These trials also mark the start of something new for Manning, a career without collegiate swimming.

Manning started out his swimming career in Brantford, Ont as an age-group swimmer. After a very impressive age-group career which resulted in some very fast sprint times as well as Canadian records, Manning turned to Auburn University in the United States for his post-secondary swimming.

He swam one year with Auburn, being part of the SEC winning 200 freestyle relay. He competed in three individual events at the 2011 NCAA Championships before coming back to his side of the border and joining the ranks at the University of Toronto.

“Without a doubt there are a number of distinct differences between the CIS and NCAA system. Where I think the CIS system shines in place of the NCAA system is the coaching staff’s commitment to your international career. In particular, Byron Macdonald, Linda Keifer and my teammates at the University of Toronto were instrumental in helping me rekindle my passion for the sport and found a way to make swimming enjoyable again.”

Manning truly benefited from the CIS system and looking back at it, sees it as a very positive option for young swimmers looking to continue swimming following their age-group career.

Now, he’s ready to go again and he’s been putting in the work in the weight room to try and get that top spot, and secure a position on the Canadian roster that will head to Kazan, Russia this summer.

“The sprinters and I have begun doing our weight program at the new Goldring High Performance Centre in Toronto this year with Alanna and Justin, two incredible strength and conditioning coaches. I’ve had an amazing time working with Justin in particular. He’s got a pretty distinct accent so we love copying it, in particular, ‘Das part of da program!’ He brings an incredible amount of energy to the table every day and all the sprinters have really enjoyed working with him.”

The 2015 trials are the stepping stone to the 2016 Olympic trials which are his main focus.

“Right now I’m thinking about where I’d like to swim following my graduation in preparation for next years Trials.”

Nice article, nice career. Quick question for anyone regarding ncaa/cis….
Can you swim a year, like manning did, at Auburn and still be eligible to swim 5 years at a CIS school today? Do you have to sit out a year? lose a year of eligibility? Can you swim 4 NCAA years then1 more at a canadian university?

From what I know, if you swam only one year in NCAA, then you can go straight into the CIS system the following year. However, if you swim more than one year in the NCAA then you would have to sit out a year if you wanted to compete in CIS. If you’ve used up all your eligibility in NCAA (4 years) then you are not eligible to compete in CIS. This was the situation a few years ago, things may have changed recently.