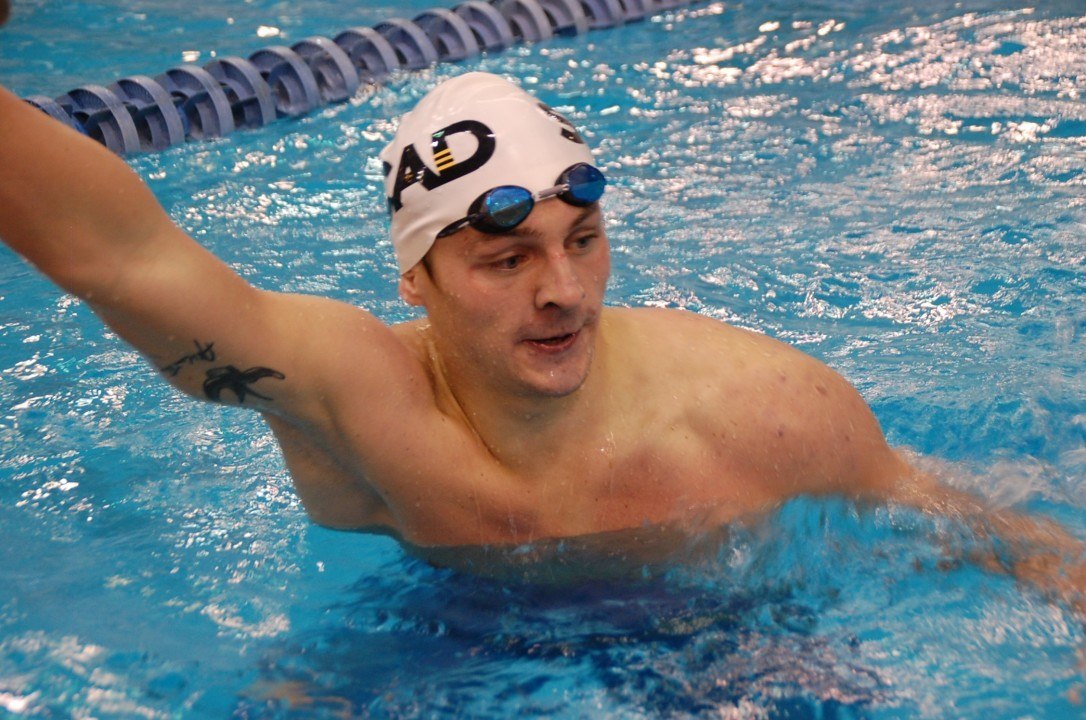 Joel Ax of SCAD smashed the meet record in the 500 free by nearly 3 seconds at 2015 NAIA National Swimming and Diving Championships. Current photo via Anne Lepesant

Given the way Oklahoma Baptist University has dominated NAIA Nationals since joining four years ago, perhaps the most astounding thing to come out of the 2015 NAIA National Swimming and Diving Championships in Oklahoma City so far is that Olivet Nazarene University is leading the Bison in swimming.

Indeed, without the 79 points OBU got from being almost the only team with divers in the meet (Biola has one diver; OBU, five), the Bison would be trailing the ONU Tigers by 8 points.

Concordia’s ability to get more swimmers than expected into finals, and then improve their prelims placements in finals, has given them an 8-point edge over SCAD for third place in the team standings at the end of Day One.

Fifth place went to SCAD; they were followed by Wayland Baptist, University of the Cumberlands, and Thomas University.

Union’s Cameron Donaldson traded stroke for stroke with ONU’s Frank Tapia for 300 yards; he pulled away over the last 200 and took second in 4:27.74. Lucas Dengler-Larles of Lindenwood passed Tapia over the last 50 for a third-place finish in 4:30.65. Tapia got fourth with 4:31.36.

The men’s 200 IM was as thrilling a finish as the women’s. Jacob Anderson of ONU, Karl Hegwein of SCAD, Concordia’s Kevin Reichel, and Alex Mundt of OBU all made the back-to-breast turn together and it looked like it was anyone’s race. Concordia’s Jacob Lear joined the leader group after the breaststroke leg, and they all raced for home.

St. Andrews’ David Lambert held onto his prelims seeding and won the championship final of the 50 free over a field that featured five Bison, including 2014 champion and meet record-holder Logan Lassley of OBU. Lambert went in 19.81 to Lassley’s 20.07 for the win. Daniel Robbins (20.21) and his OBU teammate Jake Phillips (20.27) touched third and fourth, respectively.

The rest of the A final will comprise Simon Pheasant of ONU and Marc Sambolin of OBU tied for fifth with 20.32. OBU’s JP Goyetche and Josiah Morales of Wayland Baptist rounded out the championship final.

Standings After Day One – Men