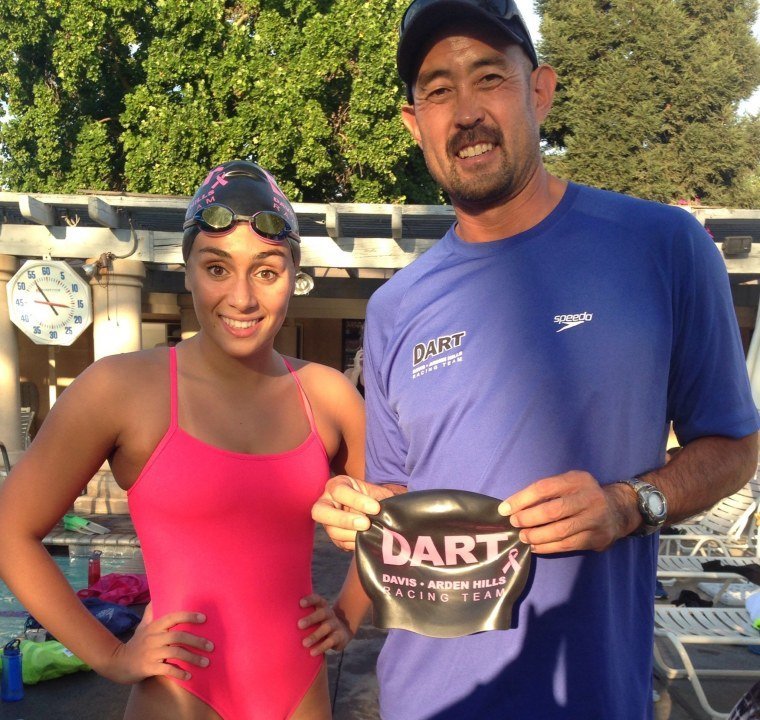 October is breast cancer awareness month, and though swimming doesn’t have uniforms to line in pink the way the NFL does, lots of aquatic athletes and coaches are finding their own way to boost the cause.

One such story comes from northern California, where Chloe Mitchell and the Davis-Arden Hills Racing Team (DART) have come up with their own campaign to contribute, putting a very swimming-specific spin on uniform modification.

Mitchell has spearheaded a “Caps for Cancer” campaign, selling specially made DART swim caps in breast cancer awareness colors, with the proceeds going to the UC – Davis Comprehensive Cancer Center.

Mitchell, now 16 and a high school junior, actually first conceptualized the fundraiser as a 12-year-old, swimming for a different area club.

“I started the fundraiser after a friend of mine’s mother passed away from breast cancer,” Mitchell said this week. “When I switched clubs, I decided to bring it back with my new club.”

Mitchell and several of her teammates started taking orders for the new caps, which take the standard blue-and-yellow Davis Aquadart design and recast them as black caps with pink lettering, as pink is the official color of breast cancer awareness.

The caps have caught on like wildfire with the team. The girls wound up ordering and selling 215 caps, with 100% of the net profits going to the nearby UC-Davis Comprehensive Cancer Center.

The campaign raised over $2,200 in just a few short weeks.

DART coach Brian Nabeta lauded Mitchell’s idea and initiative, and said the caps have not only raised money and awareness for breast cancer, but have also brought the team’s swimmers closer together.

The club is in its first season as a newly-expanded program: the Davis Aquadarts merged with Arden Hills Swimming last spring, forming the new Davis Arden Hills Racing Team.

Mitchell practiced at the club’s second site once a week to spread the word about the Caps for Cancer program. She was also quick to thank her teammates for helping spread the campaign not only to both DART training locations but to various age groups. She and a few other swimmers helped organize and carry out the campaign, and that leadership group was a mix of ages and training locations.

Swimmers and coaches who have experience with larger, multi-site clubs will understand the difficulty often found in creating a cohesive team out of several different training locations-worth of swimmers. Nabeta said he sees group service efforts like Caps for Cancer as a great way to overcome those obstacles.

“With our two sites being close together [in proximity], our focus is really ‘how can we bring our sites even closer,” Nabeta said. “We love Chloe’s idea, and she and I have been talking about handing down organizing a fundraiser to next year’s juniors.” Both Nabeta and Mitchell said they’d love to continue raising money for charitable causes in the future, and that they’d see an annual DART fundraiser as a great way to foster a team mentality.

The team will wear the caps during the month of October, though they actually got an early start, wearing them at a late-September meet as soon as the caps came in. Mitchell said the caps got a surprise reaction from some familiar faces.

“The team I was on before was at the meet,” Mitchell said, “and a lot of them recognized the caps. They said it was cool to see the fundraiser still going in a new place.”

There’s always some debate about whether swimming is a team or an individual sport. But campaigns like Caps for Cancer show that no matter how lonely it can be with your head under the water lap after lap, swimming still offers great opportunities to connect with, and help, the people around us. Mitchell and Nabeta have taken one of those opportunities, and the results so far have been inspiring.

DART will officially kick off breast cancer awareness month today, as they proudly sport the pink-and-black caps at the CCA Spooktacular in Roseville, California.